I'm using an LT1339 switching regulator to create a 24V to 12V 50A power supply and after using the calculation in the datasheet for the LT1339 I think that I need a 60uH Inductor but a 60uH, 50A inductor doesn't exist.

What can I do here and is my calculation even correct? The datasheet is here and my schematic is below. 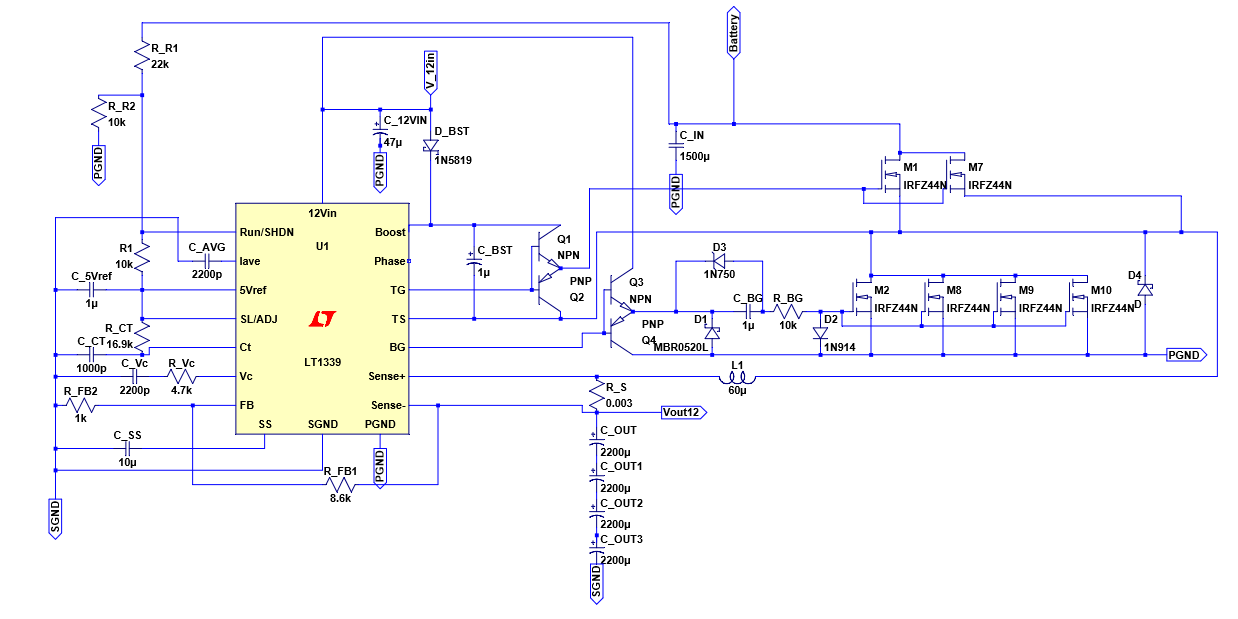 How about rolling your own inductor?

All you need is the peak instantaneous current passing through the inductor. Next, pick a big ferrite kit (possibly planar E64). Look at the data sheets and choose the most appropriate material (to suit frequency of switching). Then see how many turns are required.

From the turns and peak amps you can calculate H (magnetic field strength) - it's basically amps x turns divided by effective length of the core (specified in the data sheet). Next you look up B (flux density) from the BH curve of the material used.

Then you decide (from the BH curve) if the core is starting to saturate too much. If it is then you need a gap between the core halves. This reduces core effective permeability so you then need more turns to get back to the same inductance BUT, if you drop permeability by say 4 times you only need twice the number of turns to restore inductance (L is proportional to turns squared). The net effect is that permeability has quartered, H has gone up by 2 and B is reduced by 2 hence much less saturation.

Power to load is 600 watts (12V at 50A) and, at a switching frequency of 100 kHz this means a deliverance of 6 mJ of energy per cycle of switching. Peak current could be about 51 A because the energy liberated from an inductor as it loses 2A from 51A to 49A is: -

However, this will be significantly saturating 3C90: - 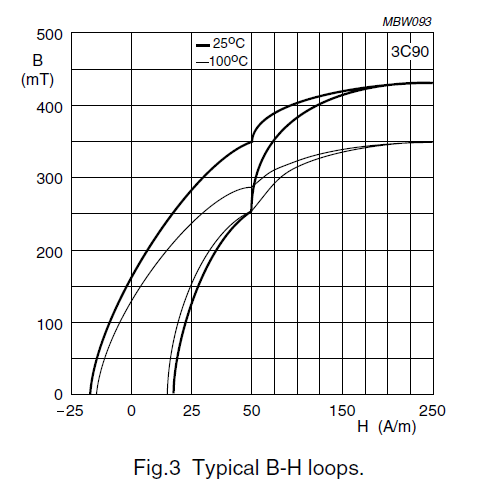 So, a gap is needed and that gap is needed to reduce the permeability (and AL) by at least 5. The basic ratio between B and H is the magnetic permeability hence if this is reduced by 5 then H can increase by 5 for the same level of saturation in the core material.

The tables in the specification sheet for the E64 core tells you that with a gap of about 0.66 mm, AL drops to 1000 and to re-establish the inductance to 60 uH, eight turns are needed (~ 64 uH). This is an AL/permeability reduction of about 15 so it's possibly an overkill. H now must increase 4 times (due to the turns increasing by 4) but, because permeability has dropped by 15 the net reduction in the saturation point is by a factor of about 3.75. It's still a little close but hopefully you get the general idea.

So an E64 made from 3C90 material with big fat PCB tracks of 8 turns is possibly what you can get away with. Adding a gap provides a way to trade between copper losses and core losses.

Not the answer you're looking for? Browse other questions tagged switching-regulator or ask your own question.