I've got a schematic that i found on the internet. The schematics is for a solar pwm charger designed around a microcontroller in this case a arduino. 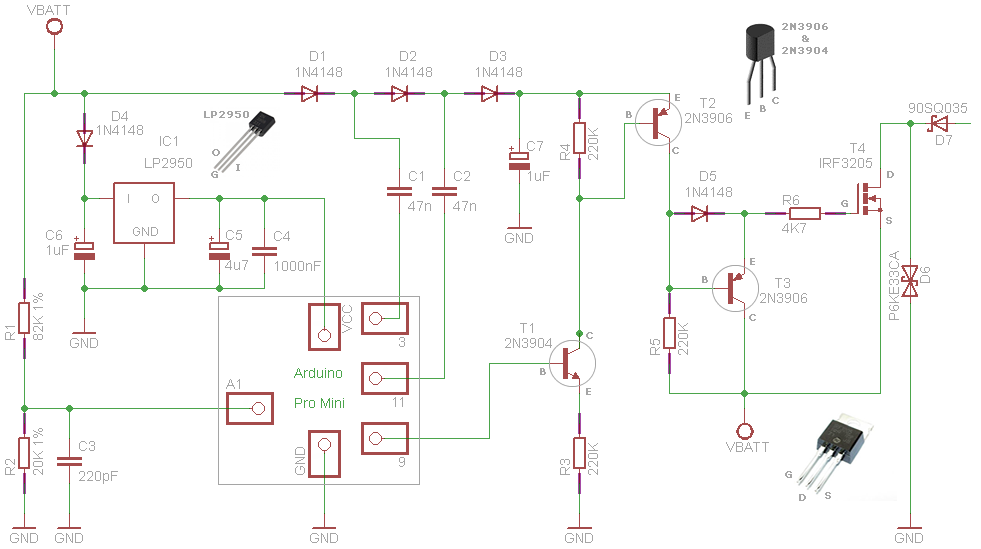 The problem lies in the values for the capacitors they are confusing to me.

The following is what i made out of it:

Is this correct and why did he label values this way, did he use some sort of standard or is it purely random?

In your circuit, the only two critical capacitors are those at the output of the LP2950 voltage regulator: C4 and C5.

For all others you can pick whatever you want: I'd probably go with electrolytics for any polarized and cheap X7R ceramics for the rest.

He's using short form notation and hints. If you have a capacitor labled 47n the Farad unit is implied because it is a capacitor. 4µ7 is shorter to write than 4.7µF. It takes less space in the schematic and on a PCB silkscreen.

You'll also sometimes see capacitors values as .1µ or .1u which is the same as 0.1µ or 100n. Again it takes less space on the schematic.

The 1000nF is the same value as 1µF, but it gives a hint that a ceramic capacitor should be used here because ceramics have for a long time not been available in the µF range. You won't see this kind of hints often though.

Remember, many of those who use arduinos are hobbyists, and while some of them are good electrical engineers, others are less experienced and might not produce great schematics.

Firstly, you have correctly read all of the values. There are several different ways of labelling capacitors, and there are no hard and fast rules. It would be nice if the schematic-drawer had picked a style and stuck to it, but that doesn't always happen.

Also, the symbols used don't necessary mean ceramic and tantalum capacitors. They just mean unpolarised and polarised. Unless the schematic says so somewhere, you can use electrolytics instead of tantalum (and in this particular case that will be just fine). Similarly the unpolarised ones could be any one of a dozen types - but ceramic is probably the cheapest and easiest.

C4 and C5 are a bit special, but in this case the schematic probably doesn't have all the information it really should have, so maybe check the LP2950 datasheet for details.

Not the answer you're looking for? Browse other questions tagged microcontroller capacitor schematics ceramic tantalum or ask your own question.

8
Which type of 100nF capacitor is best for 78xx regulator output?
5
What purpose does the capacitor serve in this schematic?
4
Resistor values on schematic
0
Possible error in schematic; unrealistic capacitor
1
Tantalum capacitor burning out
0
Identifying an SMD Tantalum Capacitor
2
Is it ok to replace a tantalium decoupling capacitor with ceramic?
3
Capacitor notation in a schematic
5
Why use a tantalum instead of a ceramic capacitor?