I'm trying to make an Arduino controlled irrigation timer. My idea is to use an Arduino pro mini and a cheap solenoid valve, wired to a TIP120.

However, from my calculations, it's impossible to run it on batteries for long. From what I've seen they draw a considerable amount of power. (the one I'm using is similar to this one https://www.adafruit.com/product/997). If i power it with 9V, it draws 240mA, which is 2.16W. And if i power it for 30 minutes, it draws 1 watt-hour. That is way too much to use with batteries.

How do battery powered controllers work then? (like this one http://www.ebay.com/itm/Home-Water-Timer-Garden-Irrigation-Timer-Controller-Set-Water-Programs-/231932984347?hash=item3600487c1b:g:HAcAAOSw9ZdXKbTA)

It's most likely a motorised valve. 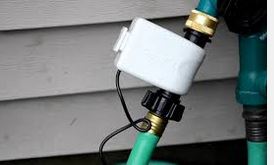 An industrial version of a motorised valve would have feedback potentiometer so that the actual position of the valve could be confirmed and, perhaps, proportional control could be achieved. Alternatively limit switches could be fitted to stop the motor once full travel had been reached.

In this case and in the case of the garden hose timers you linked I suspect that the motor would be run for a time and if the valve doesn't move then "too bad". With five or ten cycles per day the run time would only be half a minute or so and battery life should be good.

Figure 2. Simplified representation of control circuit for open / close control including optional limit switches. With SW1 and SW4 closed as shown the motor would run CW until the CW limit switch opened.

Figure 2 shows how a simple DC motor would be switched by a 'H-bridge' to effect forward and reverse motion. SW1 to SW4 would, in a practical circuit, be replaced by transistors (with protection diodes).

Not the answer you're looking for? Browse other questions tagged batteries timer solenoid water solenoid-valve or ask your own question.

2
Choosing proper size of solenoid valve
0
transistor toggles an LED, but not a solenoid valve
1
How can i trigger this watering timer manually
0
Keeping a consistent supply voltage while driving a solenoid from battery
0
(idle) energy consumption motored valve vs solenoid valve?
0
Solenoid valve part
2
Reverse engineering and reimplementing a garden hose water timer
2
How does my breadboard circuit diagram look? Is my circuit going to explode?