How to minimize hash noise in amplifier mounted near boost regulator

I've designed an audio low power (20W) guitar amplifier circuit whose pre-amp section has somewhat high input impedance, as is best for a magnetic guitar pickup. Since it operates from a battery supply, I'd hoped to employ a boost regulator so that the maximum output I have available before clipping would stay more constant as the battery voltage faded. My circuit also employs a simple compressor, which means there is more gain at lower volumes then at higher ones.

Unfortunately while everything was quiet and worked very well on the bench, I'm getting what I guess I'd call hashing noise as the components are brought closer together. The culprit is obviously the boost regulator, and the enclosure size makes it impossible to place that board more than about 6 inches away from the sensitive pre-amp circuits. Not surprisingly, the noise is worst when the amplifiers active treble control is maximized, and/or my compressor circuit is active. The boost regulator's oscillator operates at around 100Khz and of course generates additional harmonics, but I was surprised how much audible noise it added.

At this point I'm strongly considering just ditching the boost regulator idea, if I can't drastically decrease this problem. FYI, the boost regulator is a fairly common one good for moderate power, Max6A 4.5-32V to 5-60V, often sold on ebay or ali express. You may recognize it from the picture... 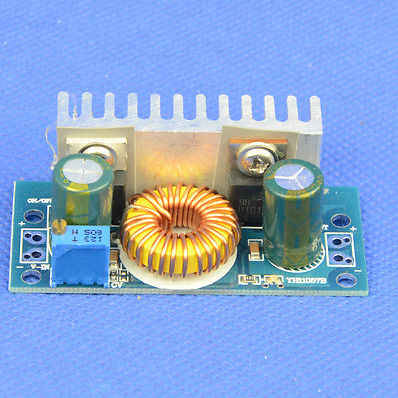 As requested by Andy, I've added a picture of my basic wiring diagram, but of course its not truly "physical". Ignore the BTEST board, which is just a battery test board only active when a button is pushed. Note that my power amp board is separate from the pre-amp/control board, which is where also the PCB mount controls are soldered down. 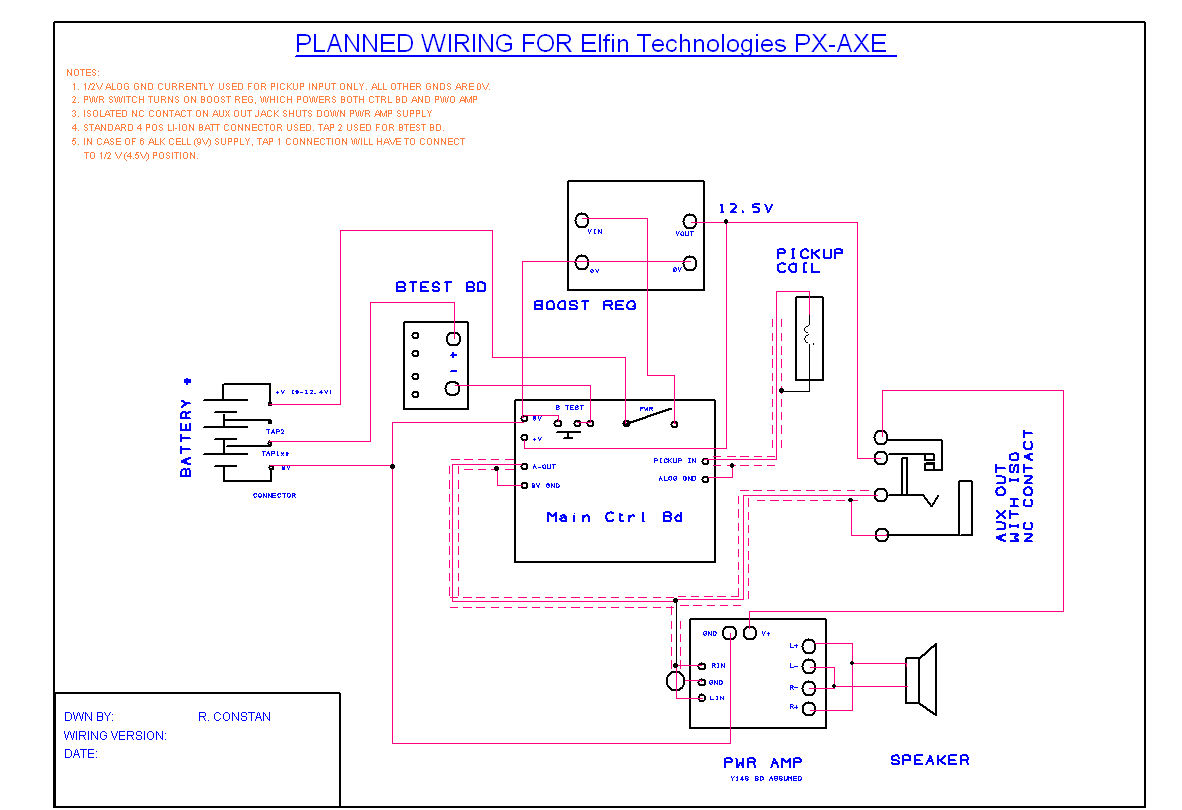 Addendum: user96037 had the most helpful info here. This photo of the boost converter output is very telling... 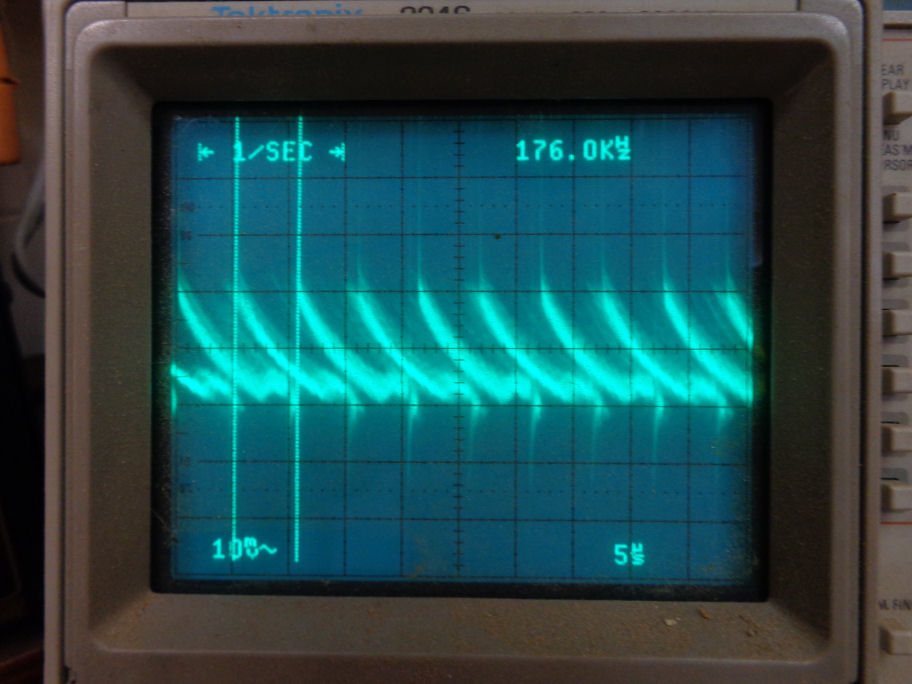 There is 20mV (!!!) of noise at 176Khz here, much more if you count those spikes. The harmonic content is huge, so all my wires are behaving as antennas. It is obvious to me that if the amplitude can be cut and the waveform softened, I just may be able to salvage my use of this boost regulator. Already I've seen that adding a "random" pi-filter helps a LOT. (By random I mean my inductor was just 100 turns around a nail). I've ordered some better (toroidal) 100uH inductors and will try to come up with the best capacitors. Of course my next challenge will be keeping my inductor far enough away from the coil on the boost converter, and figuring out the highest value capacitors that still offer decent high frequency behavior.

Thanks again everyone... I'll update this thread with my progress for the benefit of anyone else dealing with this issue.

There are two main types of electromagnetic interference. Conducted emissions and radiated emissions.

The first thing I would try is to look at the output of the boost regulator on an oscilloscope and see how much ripple voltage there is.

If you see lots of ripple then I would add a PI filter at the output of the regulator using a small inductor and two ceramic caps, and a small damping resistor in series with the inductor, where R>SQRT(4L/C). The resistor prevents resonance that could boost the noise at the resonance frequency of the filter 1/(2*pi*SQRT(LC)) Hz.

The cutoff frequency 1/(2*piSQRT(LC)) Hz should be several times lower than the 100kHz frequency of your regulator. Remember that the PI filter is second order, so if you make the cutoff 10x lower (at say 10KHz) you would squash any noise by a factor of 100X.

Also, keep the inductor in your PI filter away from that large toroid or they may couple together which defeats the purpose of the filter.

If you think that electromagnetic fields are radiating then steel sheet metal will block both electric and magnetic fields. It needs to be a magnetic type of steel. You basically just need to form it in a box around your noise source (in this case the power supply). 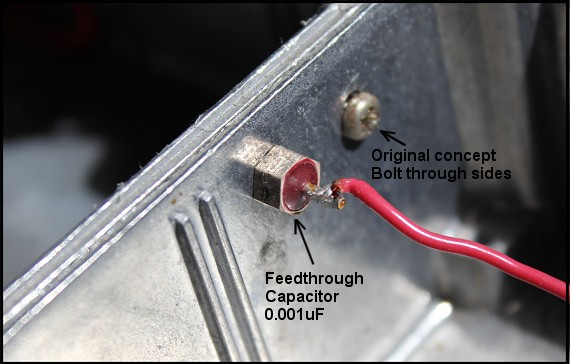 I got nervous just by reading "boost converter" and "preamp" in adjacent sentences.

Use a linear regulator for the preamp and leave the power amp directly powered. You will get both less noise and more battery life. They make rather good batteries nowadays so you can get some 10% voltage drop from a fresh battery to 80% depleted one, esp. if you use rechargeables (and you should).

Not the answer you're looking for? Browse other questions tagged audio noise boost or ask your own question.

13
Noise problem with buck/boost switching regulator
6
How to eliminate Bluetooth noise in electric guitar
0
Need help choosing options for 12V supply from a Lithium-Ion battery
3
How to clean/remove distortion/noise in my LM1458 Op-Amp?
7
Isolating audio ground between devices
2
Identifying Noise in 12AU7 Based Headphone Amplifier
1
Reducing noise in this audio amplifier
2
Electret microphone preamp is buzzing , weird noise and cannot find a solution
11
How to filter out the switching noise from a DC/DC converter