What happens after opamp saturates

here below is a TIA stage intended to do I-V conversion, as the maximum supply voltage being 5V for a given feedback resistance of 1K the opamp would saturate for a input current from photo diode of 5mA 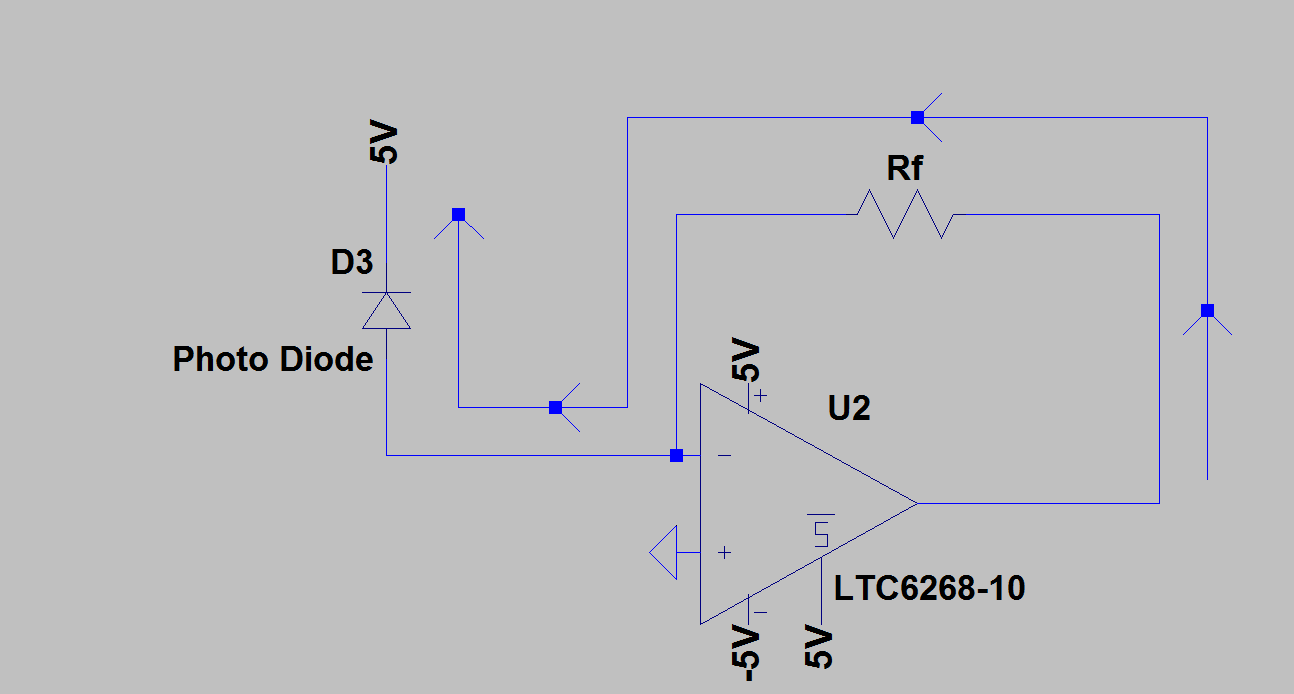 lets assume the current be pulsating , what happens if more than 5mA current is given to opamp, obviously it would saturate and after a override recovery it would retain its state again

where exactly has remaining 95mA of current has gone ??? the opamp input doesn’t allow it to pass any way due to very high impedance,

or as it crosses the input current limit, it would burn/enter in to high impedance input even ?

i am beginner to opamp, i have read it and understood it as black box only, please give me some reference on how an opamp in saturation should be understood, what is the limit of current here even,

Undefined and varies between opamps.

You may see voltage on the supposedly virtual earth input. If that voltage exceeds the supply, (or some lower voltage relative to the +ve input) there may be protection diodes to drain the excess current.

You may leave one or more stages inside the opamp saturated, and saturated transistors turn off slowly, ruining high speed opamp's performance. Therefore after the excess input current is removed, it may be a long time (microseconds) before the opamp correctly responds to input signals again.

If this behaviour matters to you, it needs to form part of your criteria for selecting an opamp, in discussion with the supplier's application engineers.

But the correct answer is : it won't happen, because you'll re-design the circuit to avoid saturating the opamp.

EDIT: From the datasheet which should have been linked in the question :

Input Protection To prevent breakdown of internal devices in the input stage , the two op amp inputs should NOT be separated by more than 2.0 V. To help protect the input stage, internal circuitry will engage automatically if the inputs are separated by 2.0V and input currents will begin to flow. In all cases, care should be taken so that these currents remain less than 1 mA.

So, with the positive input grounded, if the illumination saturates the amplifier and Vin- starts increasing, the device is in danger of breakdown when the input reaches 2V, at which point the photodiode is still reverse biassed by 3V. Then protection can absorb an additional 1mA, before the input voltage rises further.

While @le_top is correct that once the photodiode becomes forward biassed it will start to absorb any excess current, it's quite clear from the datasheet that this specific opamp won't survive to that point.

A photodiode is pretty much like a normal diode only that the incident light will shift the V/I characteristic curve of the diode. The voltage that you apply to the diode will result in a current according to this curve. Similarly a current that you apply would result in a voltage. The diode is still limited by a forward voltage and a breakdown (reverse) voltage.

In your circuit a reverse voltage of 5V is applied in normal operation and this could increase up to 10V if Rf and the opamp saturation voltage allow it. However it should not be more than 5V because in the dark the diode behaves as another diode an the opamp feedback will function and the '-' input will settle to 0V.

It is possible to predict the operation from the shifting V/I curve.

When the Rf resistor will be limiting the current because of saturation, the diode will be in forward bias due to the internal current. So the anode is higher than the kathode and it would be at about 6 V (depends on the forward diode voltage). The opamp output would saturate to about -5V and the resistor and diode current would be about 10V/Rf.

All the current that the diode can not deliver is internally consumed which results in a heat up of the diode. It will not heat more than any other similar object that you would subject to the same light intensity. It will heat slightly less as part of the energy is consumed by Rf.

Here is another way to analyze the circuit:

The current flowing through the diode to the circuit is a reverse current from the diode's point of view. The current comes out of the kathode to the \$R_f\$ resistor and flows into the anode from the 5V supply.

From the datasheet, we can see that when the current through the photodiode is 0, but when there is enough light, then the diode voltage is at the forward saturation voltage.

However, the circuit can not absorb this current ; \$R_f\$ limits the diode's current (the '-' input of the opamp consumes even less current).

The photodiode will absorb this excess current internally and the diode voltage will be in forward bias.

As the '-' input of the opamp is higher than the '+' input, the opamp output will decrease. Thanks to the negative feedback the '-' input voltage level will also decrease until the opamp saturates. The opamp can not lower the output voltage far enough to get 0V on the '-' input. Therefore the current flowing through \$R_f\$ is limited due to the saturation of the opamp. The '-' input will be well above 0V, and even at about 5.75V because the diode is in forward bias.

This is coherent with the equivalent photodiode model which predicts that the excess current is essentially consumed by an internal equivalent "normal" diode.

I hope that the mystery is resolved. It is not "easy" to understand at first sight, you surely have to work on this explication a bit.

It won't be 100 mAmps that will be flowing through the diode. When the opamp is saturated, you can just consider it as its grounded output and leave out the inverting input. There will be 5 mAmps flowing across the diode, the resistor and the low-side output transistor of the opamp. Though the diode would let more current to go through, it gets limited by the voltage of the diode supply and the value of the resistor.

There are two current paths for a hypothetical 100mA photocurrent; one is through the feedback resistor Rf, and the other is through the op amp input pin.

That's important, because there are protection diodes, from each input pin to the power rails, and those will conduct at circa 1V; if they conduct more than 1 mA, you have exceeded the maximum allowed input current, and can expect chip failure.

Even if they DON'T conduct, using +5 and -5V supplies exceeds the permissible power supply voltage for this device (5.5V absolute maximum, and the schematic shows 10V applied).

The op amp will not only saturate, it will burn up. A current limiting resistor in series with the op amp input would be a good start, and a feedback resistor that WILL handle all the expected current, even in high-input cases, would be recommended. Keep inside the data sheet 'absolute maximum' range for applied power at the power pins, AND current at the input pins.

Not the answer you're looking for? Browse other questions tagged operational-amplifier saturation transimpedance or ask your own question.

0
current limiter for TIA, reducing the problem of distortion in over limit input

1
Opamp Misbehaving in Constant Current Source Circuit
0
Can an opamp be neither in linear region nor saturated?
0
OpAmp circuit with diodes: conduction conditions
7
Limiting Output Voltage of the Opamp-to avoid saturation
0
How does a photodiode behave in saturation?
3
eliminating those unwanted op amp[TIA] outputs
2
Avoiding opamp saturation - working with apd
1
How to find input impedance of this OPAMP circuit?