is one “bigger” psu more efficient than two small?

This is a bit trickier than it might at first appear. As with many devices power supply efficiency is generally quoted at rated output. At outputs less than that the efficiency will fall.

There's an interesting APPLICATION NOTE 4266 by Maxim, An Efficiency Primer for Switch-Mode, DC-DC Converter Power Supplies, which goes through this in some detail. Here's an extract:

Advanced SMPS ICs often combine the benefits of constant-frequency PWM at higher loads with the enhanced efficiency of pulse skipping at light loads. The IC depicted in Figure 1 is just such a device.

As loads increase to higher active values, pulse-skipping waveforms transition to constant PWM, with noise easily being filtered during the normal operating load. The overall effect is maximum efficiency over the entire operating range, as demonstrated in the efficiency curves of a typical step-down converter with selectable pulse-skipping and PWM modes (Figure 8).

Curves D, E, and F in Figure 8 show efficiency falling off at lighter loads during constant PWM operation, but increasing (up to 98%) for higher loads. If set to maintain PWM operation at light loads, the IC switches whether or not the load requires it. This keeps ripple at a constant frequency, but wastes power. At higher loads, the energy penalty of maintaining PWM switching is small when compared to the load, so power losses are overshadowed by the output power. On the other hand, the pulse-skipping "idle mode" efficiency curves (A, B, and C in Figure 8) maintain efficiency even down to very light loads since switching occurs only as required by the load. For the 7V input curves, idle mode provides more than a 60% efficiency improvement at a 1mA load. 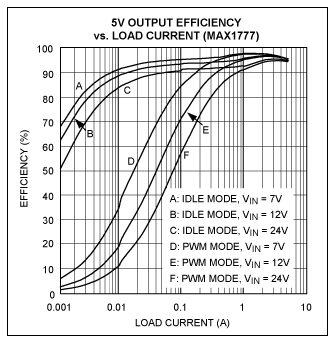 I think the answer to your question would require checking the specification for the power supplies at other than full load and doing the calculations based on that.

It really depends on the specifications of the PSU units themselves. How efficient are the smaller units versus the bigger unit. It does also depend on design, not just on size.

The best guess without knowing the specifications is that one bigger supply (especially at these power levels) is more efficient than two units.

Not the answer you're looking for? Browse other questions tagged power-supply power energy or ask your own question.

1
using double powersupplies
2
Multiple 12V devices with one power supply
0
Use one power source for two atmega chips
1
Low voltage DC UPS - confirm specs
1
How does electrical signature devices work when there is more than one load connected?
0
Can I hook up more than one device per terminal on a power supply?
0
High bulk capacitance (100.000 uF) discharge time on Wifi router supply