I have nothing to do with electrical engineering so this may be lame question.

According to Kirchhoff's law sum of currents of L1+L2+L3 should be same as current of neutral wire. What puzzles me is why neutral wire has the same diameter as phase wires in a cable. Can anyone explain or point what may be stupid about this question?

ADDITIONAL INFO L1/L2/L3 do not have to be equal. I know a building with say 3 flats can be connected to "outer world" with 3 phase cable and each phase is connected to different flat. In such scenario phase currents differ but neutral is common. Doesn't neutral wire conduct sum of all 3 phase currents then?

What happens in the case of a symmetric, non-harmonic generating load is that the fundamental currents cancel each other out when added to form the neutral current -- this is a result of the 120 degree offset between the phases. (Think of it as current flowing from hot to another hot and returning that way instead of returning on the neutral.) There are two cases where this does not hold though: asymmetric loading and triplen harmonics.

In the worst possible asymmetric loading case, the circuit's rated ampacity is placed entirely on a single phase. Assuming that the load is non-harmonic-generating, this means that the neutral current equals the load on the circuit, allowing for equal size hot and neutral wires to be used, and the breaker on the hot side to protect the entire circuit's wiring adequately. (Putting the rated ampacity on two phases doesn't change things, either.)

What's worse, though, is when you have harmonic generating loads spread across the phases. While the fundamental and most of the harmonics cancel, odd harmonics that are also multiples of 3 (3, 9, 15, and so on, called "triplen harmonics" in the electrical world) do not cancel out, leading to a situation where the effective neutral current is higher than expected -- it can be even higher than the circuit ampacity as these harmonics are coming from loads on all three phases and returning on the neutral. The resulting high currents can overload the neutral alone, leading to a fire hazard and the need for a doubled or oversized neutral to counter this.

(They can also overheat the common delta-wye type of power distribution transformer, but that's neither here nor there for this problem.)

ADDITIONAL INFO L1/L2/L3 do not have to be equal. I know a building with say 3 flats can be connected to "outer world" with 3 phase cable and each phase is connected to different flat. In such scenario phase currents differ but neutral is common. Doesn't neutral wire conduct sum of all 3 phase currents then?

The individual neutral connections to each flat carry the return current back to the building distribution board. If the loads are exactly balanced the neutral currents will be 120° out of phase with each other and will sum to zero. The ammeter shown in Figure 1 will read zero. 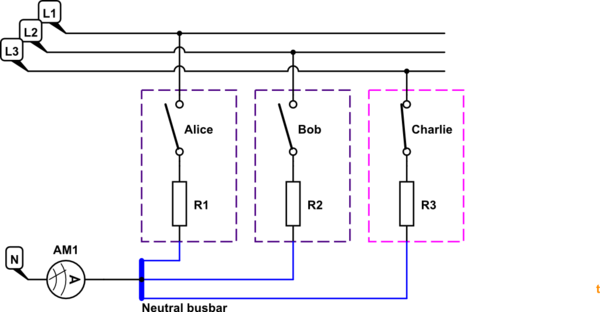 On the other hand, consider the three flats situation when Alice and Bob are on holiday and Charlie's is the only occupied flat. Normally their loads would balance reasonably well but now Charlie is the only one pulling power from the phase that he's connected to. All his current must return to the transformer via the neutral wire. Therefore:

For 3-phase power normally there is NO current on the neutral wire if phase currents are equal. There is only current on neutral if a phase is not the same current as the other 2 phases. I have done several installations of main service panels where 2 neutral wires were run, also known as a 'double-neutral'. This is to account for some imbalance in the loading of the 3 phases.

The currents in the three phases are 120 degrees out-of-phase with each other. If the three currents are equal, the sum flowing in the Neutral wire will be zero due to the phase differences.

5
How to apporach this phasors exam question with gernator parameters and currents given?
3
Calculating phase currents and neutral phase current
1
neutral conductor in a three phase system
0
bulbs connected to a three phase system - what is the current in neutral conductor?
1
Neutral and live holes/wires
1
3 Phase 3 wire delta, current transformers and lots of questions
0
Choice of wire diameter for doll's house?
1
why current flow through ground wires of submersible 3 phase motor?
1
Neutral current