How to tell film capacitor type

How do you tell what type a capacitor is, (e.g. MKT, MKP, Mylar)? Most capacitors probably don't have a datasheet. Also, if the capacitor has no markings/code, for example: 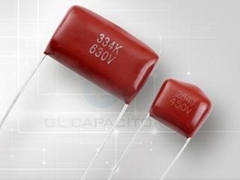 is it possible to guess the type of the capacitor?

Might be helpful. You can tell polyester from polypropylene, and maybe polycarbonate (rare these days).

There is NO solid answer to your question.

EDIT: As shown by Robert Endl's testing for dissipation factor with different dielectrics, if one has the need to, a DIY chart can be created that shows how the dissipation factor changes for a given dielectric type, all having the same capacitive and voltage value. This would be helpful for capacitors out of a junk bin that can be sorted with a good LCR meter.

1
Capacitor value for Mini PCI type III pins 97 & 101
3
When to use film capacitor
0
Interpreting Capacitor Markings
1
Choosing a capacitor to buy (Mullard tropical fish substitute)
0
How to tell if a printed capacitance is the actual value or a capacitance code?
1
Using PP film or PET film as active filter stage capacitors
1
Capacitor type selection
0
Identify This MMK Capacitor on IcePower250W Board