Should a 555 IC remain powered when a [battery powered] device is turned off?

I'm fairly new to electronics. I wasn't able to find anything addressing this on the Web but that may be because I don't know the search terms to use.

I'm trying to design a device that contains two 555 timers. When powered on, one timer will be used to generate a repeating beep every 5 seconds and the other will be used to turn the device off after 1 minute. It will be powered by a couple button cells which preferably won't be replaced for the lifetime of the device.

Should the 555s remain powered on (ie voltage applied to Vcc pin) when the device is off? This seems like the obvious choice to save battery, but I'm worried that there will be timing issues if Vcc and the input pulse (to initiate counting) arrive at roughly the same time to the 555. Should I add a delay IC to the input pulse? Or should I use 7555s, which draw less current, and leave them powered on? Are they significantly more expensive? How long could I expect the button cells to last with a 555 vs 7555? 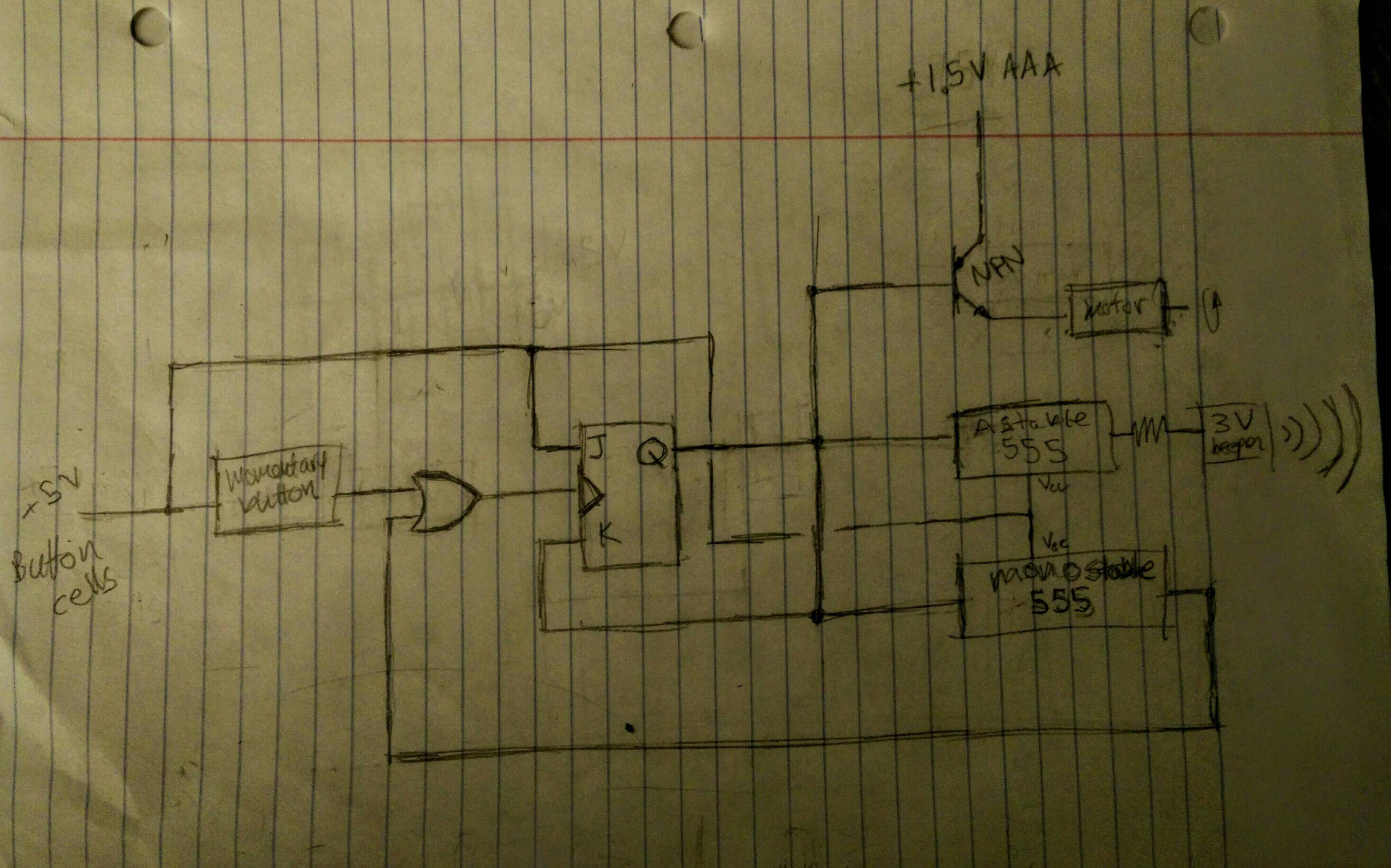 Or should I use 7555s, which draw less current, and leave them powered on? Are they significantly more expensive? How long could I expect the button cells to last with a 555 vs 7555?

The tradeoff is that the newer 555s have a smaller voltage range, 10V max for the ALD7555. Then again, they also work at lower voltages, some down to 1.5V like the LMC555 instead of the 4.5V of the LM555. There are more differences that may be important, but not really.

The cost difference is small. ~25 cents at 1k units, instead of 7 cents.

Based on the schematics and end goal, even CMOS 555 timers won't work well for your application. Coin cells don't have much energy. The common cr2032 provides 250mAh at low draws. Just the 555 timers would drain that in 1000 hours, not including active power draw. Add a AND IC, a Flip Flop, the Buzzer and Motor and Transistor? Under a month, max.

Solution? A microcontroller to replace all the logic. A single microcontroller can handle keep the time (5 second counts up to 1 minute), no need for the flip-flop or the AND ic, or inverter. Everything in code. In deep sleep like the MSP430 can have just 10µA current. It sleeps in Low Power Mode 4 or 4.5, wakes up when the push button is pressed, turns on its clocks, not even only 100µA.

The biggest problem is simply how much current is used by the buzzer and motor. If you power the motor and buzzer off AAA or AAA batteries, and the microcontroller on a coin cell, you could get a year. Assuming you keep the microcontroller current under 30µA average, then it will last 1 year. If you just power everything off 2x AAA (3V 1500mAh) or 2x AA (3V 2800Ah) you will get years (depending in how often it is triggered).

5
How can I make a 15 minute egg timer circuit?
1
Adding to a circuit the ability to "remember" the last chosen settings when turned off or disconnected
2
Anyway to avoid the startup delay on square wave generator (e.g. 555 astable) circuit?
0
power on power off pulses to two seperate controllers
2
Astable 555 timer circuit that resets on a heartbeat
3
555 timer that does not output low when reset
0
555 trigger amplitude slightly too large to trigger
0
555 timer won't trigger monostable mode unless I add a switch between R12 and ground?