What's the standard way to detect a digital signal transition?

The 2-phase dual-rail protocol in the concept of asynchronous handshaking relies on detecting signal transitions.

How do we detect a signal transition from LOW to High or HIGH to LOW? What is the output of this detection? A permanent High? or LOW? or another transition?

I need the transistor level schematic or at least a few words on the design concept to help me come up with the design by myself.

My initial thought is to put a memory element on the signal and then after the transition happens we can compare the signal with previous value and detect a change, but then how do we detect the transition itself?

You're on the right track with your idea of putting a memory element on the signal etc.

by a bunch of NAND gates.

The classic approach to this problem when dealing with digital logic is to use a single 2-input exclusive OR gate. Feed the signal directly to one input and through an RC delay to the other input. When the signal changes from low to high, the XOR gate will give an immediate output because only one of its two inputs is high. Shortly after that the second output will go high, thanks to the RC circuit, and that will cancel the XOR output. The result is a pulse out when the monitored signal changes from low to high. When the signal changes from high to low, the same sequence occurs, so the final result is a pulse when either a high-to-low or low-to-high transition occurs.

If you want to build asynchronous sequential logic in general, you'll have to define some basic building blocks that accept two (or more) sets of 2-rail dual-phase inputs and produce a 2-rail dual-phase output. A building block would like this would be an asynchronous state machine with 5 inputs and 3 outputs — much more complicated than a DFF, but still using the same design techniques internally.

It would seem that design techniques for generic asychronous state machines are not widely taught any more — 40 years ago, it ws a required part of an EE undergraduate curriculum. These days, nearly all sequential logic of any complexity is implemented with synchronous logic, and that's all that is taught. So you'll have to do some digging in order to get up to speed on this topic if this is something you want to pursue. It's a topic that's too broad to address in the Q&A format used here.

You can use the following schematics with 2 D Flip-Flops and an XOR gate: 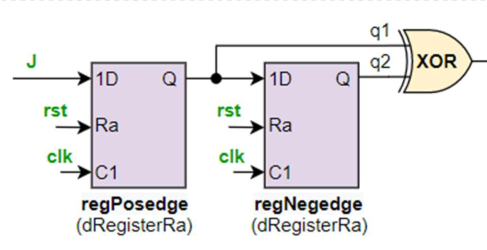 Not the answer you're looking for? Browse other questions tagged digital-logic circuit-design digital-communications or ask your own question.

3
How to decode morse code with digital logic
4
Asynchronous inputs to timing diagram
4
Allowing a BJT to turn on and turn off at different set points
1
Can you explain how the 2-phase dual rail channel works?
1
Scaling a car's injector pulses to count and time them?
1
D Flip Flop Toggle -- Q into Hex Inverter into D, Unstable Output, Help
0
How to determine if conventional electronics circuit is a better choice over a MCU?
0
EVSE method of monitoring PE line in aCcordance with IEC 62955
0
Detect pauses in a digital signal on a scope?