Need help with current pulse input to an analog circuit

I have been struggling to solve an issue about signal conditioning an instrument with an analog circuit. First I would like to explain the instrument very briefly:

There is a windmeter which is outputting current pulses proportional to its rotation/windspeed. Here is its datasheet: http://www.synchrodan.hu/letoltes/kriwan/kulsoerzekelok/szel/N292_INT10K_69000248_e.pdf

As you can see in the second page there is a speed-freq. plot. I would like to mention that I only need up to max 1000Hz output(less than 20m/s).

Output of this sensor is current pulse.

Here is the signal output details from the data-sheet: 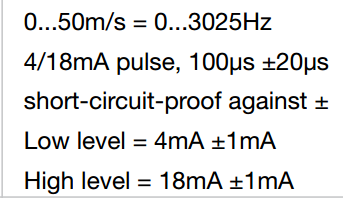 What it says is, the output frequency of the pulses varies proportional with rotation/wind speed; but the ON time of the pulse remains same around 100us+/-20us. I confirmed it by wiring a 600 Ohm shunt resistor as shown in the wring diagram(I used 24VDC to power) in the datasheet. And observed the output via an oscilloscope.

The output was a pulse train with the pulses jumping from 2.5V to 7.5V. This is because the current pulse is not zero when the pulse is in OFF time. For example at 1000Hz output the pulse train(with a 500 Ohm shunt) will look like: 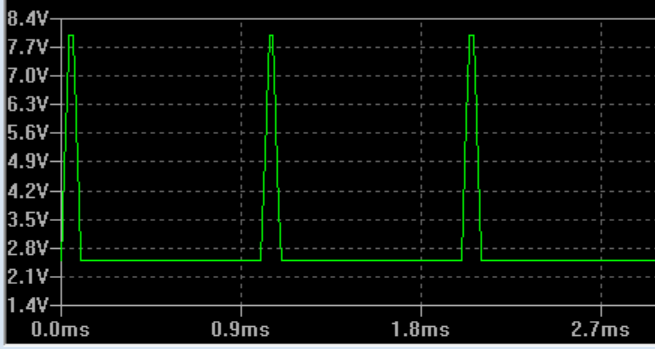 **So far so good. Up to this was only to introduce the instrument.

**Now the issue was, since the ON time of the pulses were very short and my sampling rate cannot be more than 4000Hz; I was having troubles when sampling these. I don't want to go in details about these. Shortly ON time had to be increased, there is no other option in my case.

Anyway I implemented an analog circuitry using a comparator and a 555 timer.

The circuit increases the ON time of the pulses without changing their frequency.

The simulation works very well and I also tried with a function generator as an input. Here are the results: 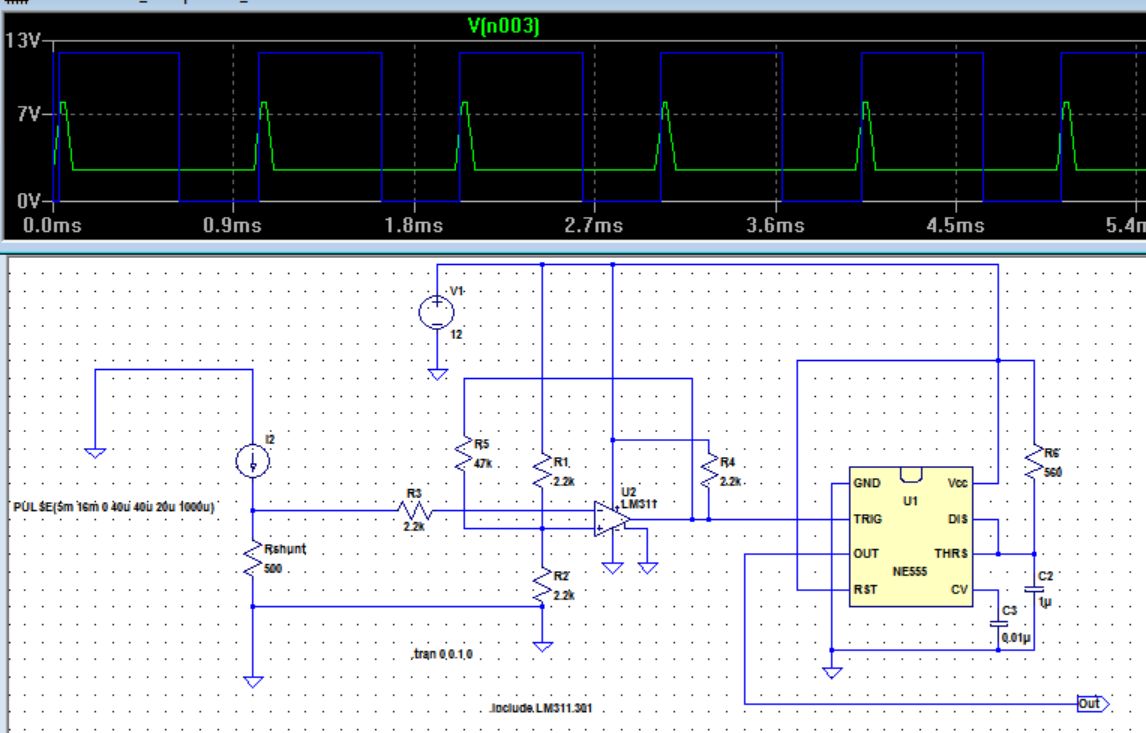 (please left-click to enlarge the picture)

And below I recorded a short video with a 0 to 5V pulse input where I change the duty cycle of the input. As you see, I change the ON time of the input pulse but the output's ON time is longer and its frequency remains the same:

Long time ago this also worked when the input was the windmeter but I dont remember if it was by chance. But now I'm trying with the windmeter I dont get any signal output just noise. The wind meter output is working I checked several times. Circuit is also working with the function generator. But the circuit doesn't function when I hook up the "current pulse" through a 560 Ohm resistor(so it becomes a voltage pulse input which is from around 2.5 to 7.5V). I use 12V for rails of the opamps and the windmeter uses 24V power suplly.

What could be the problem here? I have spent many hours and no luck..

Browse other questions tagged current pulse or ask your own question.

1
How to remove DC offset of the input signal without using an opAmp?

1
How do I build a one shot non-retriggerable pulse generation circuit with 2 triggers?
3
Conditioning current pulse signals
2
How to stretch ON time of a pulse train when keeping the periods unchanged?
1
Measuring pulse width with limited components
0
Spec sheet for a pulse generator: Interpreting current output
0
Need help with counter circuit
0
How to detect pulse duration with cmos circuit
1
Capturing pulse periods by sampling accurately