I have taken apart a battery module consisting A123 Systems ANR26650-M1A cells (they are technically Lithium-Iron-Phospate (LiFeo4) cells) that were used in a commercially controlled environment. After I charge them using a variable lab bench to the specified 3.6 volts, at a low amperage, below 0.5C, I have noticed a continual drop in voltage when measuring with a multi-meter.

Initially, each cell will read the voltage it was charged to, but over about a 6 hour timeframe, the voltage readings gradually drop and stabilize. I found this peculiar, since all of the batteries were doing this, and stabilizing a various voltages.

I later ran discharge tests using a battery analyzer, and I have documented that the voltage readings stabilize at the exact percentage of the remaining capacity. For example, in this case, with a 3.3v nominal rating, it is supposed to be charged to 3.6v. After performing a discharge test, the analysis will conclude that there is 2.202Ah, out of a potential 2.3Ah, resulting in 95.8% capacity. Interestingly, 95.8% of 3.6v, is ~3.49v, which is the exact voltage that this particular cell stabilized at. I've had identical results with over 20 cells now.

Also, if I take the exact same cell, and perform an analysis, almost immediately (within minutes), I obtain identical capacity readings as to when I allow the voltage to stabilize, say 6 hours later.

In conclusion, it appears there are two inferences that can be made.

My question in general is this; is this normal? Has anybody else documented this as well?

Yes, it is normal for the resting voltage to drop below the charging voltage.

When charging a Lithium-Iron-Phosphate cell the voltage will gradually rise as the stored charge increases, then rapidly climb to 3.6V and over as it reaches full charge. This rapid voltage rise is a result of the battery running out of places to store charge, and will not be sustained when it is resting.

In a series pack one cell may reach full charge sooner than the others, and then its voltage could rise to over 4V before the battery reaches peak voltage. To prevent this you should put a 'balancer' circuit across each cell to bypass the current when the cell reaches 3.6V. When all cells reach 3.6V you can stop charging because the pack will be almost full. Alternatively you can gradually reduce charging current to zero while staying at peak voltage, which might get an extra 10% or so into the battery.

In the example plot below the green line is charging current, the red line is voltage across the cell, and the blue line is absorbed charge. You can see that very little charge is accepted after reaching 3.6V, and the resting voltage soon drops to 3.4V after charging current is removed. 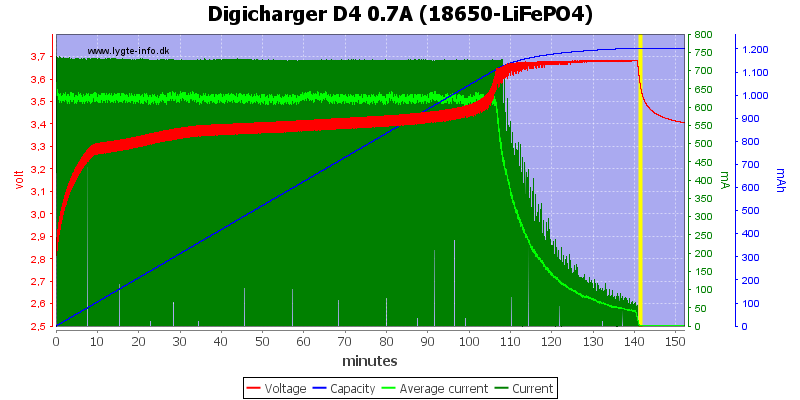 I can confirm from my practical tests of over 1000 various recycled Li-Ion and Li-IP cells that the voltage they stabilizes at has indeed a direct correlation to their capacity. As for the formula you mentioned, to be more relevant it would need a correction factor (the interval between the considered fully-charged and discharged values - example: 3.3-4.2V).

For Li-ion, the drop may also occur after quite some time, but it's still relevant. I have found that cells that stabilize at above 4.15 V have almost full capacity, the ones that stabilize around 4V have reduced capacity and the ones that drop at 3.7V or below are in very bad shape (getting to unusable quality at 3.3V).

Not the answer you're looking for? Browse other questions tagged batteries battery-charging lithium-ion lithium-polymer or ask your own question.

10
Properly charging and discharging Lithium cells during battery testing?
22
Measure Lithium ion battery voltage (thus remaining capacity)
2
Estimating the Capacity of Charged Used Li-ion Cells:
11
Why are 3.8V lithium-ion batteries used in mobile devices, rather than 3.6V or 3.7V batteries?
1
Lithium Ion voltage during discharge
0
Can I put Li-ion batteries in series and discharge them at different voltages?
0
What charger for a 13s10p Li-ion battery pack?
2
Preserving lithium-ion battery vs cycle count: Greatest influence between depth of charge vs discharge?