Flash memory : What are blocks and pages from a physical standpoint?

I would like to know the link between the physical layout of NOR and NAND flash cells and the concept of blocks and pages. I would also like to know the exact reason for why erasure only happens in regards to blocks.

I also don't get why NAND memory is not memory-mappable like NOR memory. I know that it comes from the fact that NOR cells are connected in parallel to the bit lines, but I don't get why you couldn't be able to read a whole word at once on NAND memory.

The word lines select which word is going to be read/written and the bit lines carry the data, isn't it ?

Disclaimer: in the followings I will (mis)use the term "memory cell" as a synonym of Floating-gate-transistor. This is not always true, as, for instance, some recent flash chips use a discrete-storage charge trapping medium, instead of a monolithic floating gate. Still the same considerations hold true.

Each memory flash is an array of memory cells. This array is divided in blocks. Depending on the flash memory topology (NOR or NAND, see note 1), each block will have the cells of each bitline connected in parallel, or in "series" (see note 2). Below is a depiction of a NOR (left) and a NAND (right) 4x4 memory block.

In the previous image, the block is the whole 16-cell array, while the pages are the cells connected to the same word-line. Of course blocks and pages are not that small.

would also like to know the exact reason for why erasure only happens in regards to blocks.

Because of definition of flash. Flash memories are called in this way because, unlike EEPROM, the cells are erased in block, in parallel, i.e. at the same time, so they are faster that EEPROM. Erasing a similar number of cells on EEPROMs takes a much longer time, as it's performed on per byte-basis.

Why is the erase time so slow.

The cell erasure process is very slow, because it is based on a quantum-mechanical effect called Fowler-Nordheim (FN) tunneling. Each floaing gate stores a very small charge (hundreds of \$nC/cm^2\$ up to \$\mu C/cm^2\$, depending on the particular technology), but the FN tunneling current is small too (between some tens \$\mu A/cm^2\$ up to several \$mA/cm^2\$. Actual value depends on the manufacturer's programming voltage - the FN current exponentially grows with the voltage). As a result, the time taken for the erasure is very long (typically some ms).

I also don't get why NAND memory is not memory-mappable like NOR memory. I know that it comes from the fact that NOR cells are connected in parallel to the bit lines, but I don't get why you couldn't be able to read a whole word at once on NAND memory.

In theory one could make a NAND flash controller that allows the NAND to be memory mapped. The problem is that it would be slow as hell. And, see later, rather unpractical.

In fact, at a first instance, the low random-read speed derives from the NAND topology. Assume that you want to read a word in the last page. On a NOR topology, the bitline is loaded by the capacitance of the other N-1 cells (plus bit-line capacitance, as well as pull-up and decoder capacitance). The propagation delay therefore increases almost linearly with the number of word-lines. In a NAND topology, the MOSFETs are in series. The network can be approximated as shown below.

Assuming equal C and R values, you have that this formula yields about \$k\cdot R\cdot C \cdot \frac{N(N+1)}{2}\$, i.e. the propagation delay increases with the square of the number of word-lines per block. In a typical NAND flash there are 32-64 word lines per block, therefore, neglecting the bit-line capacitances, the time might be about 30-60 times larger than NOR (given the same number of word lines).

However, the topology-defined access-time is not the sole limit to the speed. In fact, the first goal of NAND flash memory is just high memory density, rather than random-access speed (and reliability...).

Therefore, to improve densities, the size of the cell are shrunk, including the tunnel oxide (to keep short-channel effects under control). A thinner oxide means that there is a higher chance that a critical defect is present in the tunnel oxide. A single "well placed" (i.e. right in the middle, where it maximizes trap-assisted tunneling) defect can discharge over time the floating gate (this problem is less exacerbated using a charge trap storage, because the information is not stored in a single conductive electrode, but rather it is stored in several discrete and insulated sites). To improve yield, the manufacturer will sell devices even if the contain a number of bad blocks. Such blocks are marked by factory testing. However, program and erase operations occur at very high electric fields (about 10MV/cm), which are extremely stressful for the tunnel oxide (not counting also fixed charge trapping), and new defects can be generated repeated program/erase cycles (that's why you have a maximum endurance of 10k-1M P-E cycles). As a result, new cells can become faulty over time. Therefore a proper error detection and correction algorithm must be implemented as well as bad block identification, recovery and copy. Not talking also about wear leveling, etc.

Not only bad block management poses a strong limitation in terms of random-read speed, but also it has the following implications, which are strongly undesirable on a memory mapped device:

Therefore, typically, if NAND flash is used as code storage, the system (e.g. using the boot rom) copies part of the NAND flash to the RAM, and executes the code from there. This not only allows fast execution, but the code will run on a contiguous memory, regardless how many bad blocks the NAND flash had.

The word lines select which word is going to be read/written and the bit lines carry the data, isn't it ?

To answer why erase only happens in blocks on a physical level, the actual NAND cells are implemented in a P-well within a deep N-well. Because erase involves setting the substrate to a high voltage so that electrons can tunnel out through F-N tunneling, all the cells within a P-well are set to the same substrate voltage. Based on this image1: 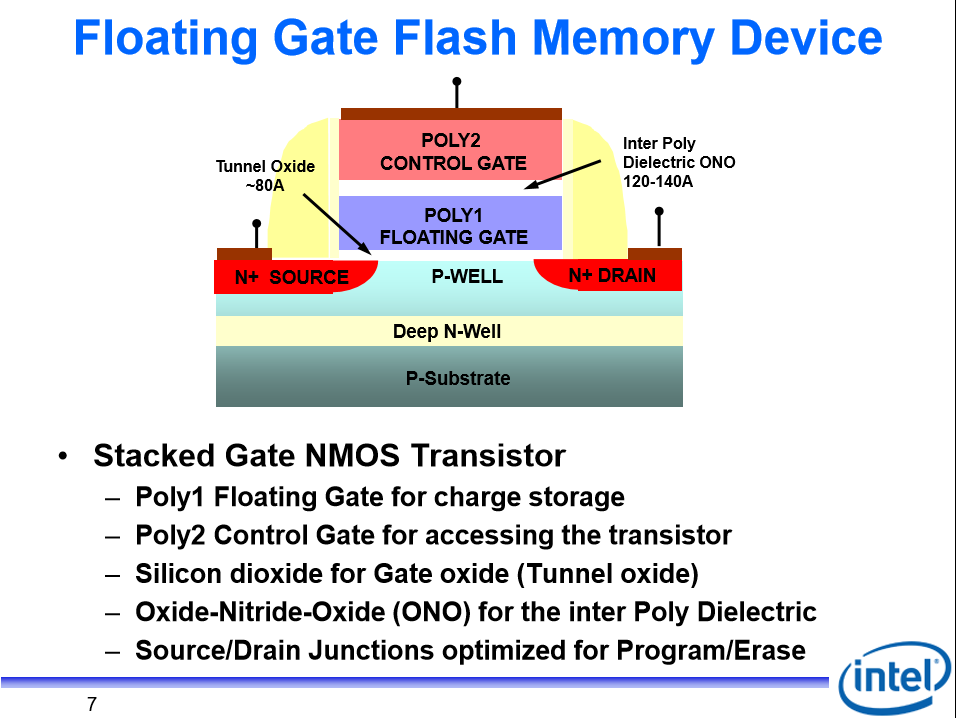 the P-well voltages are common across many cells and so adjusting this voltage erases a block.

Not the answer you're looking for? Browse other questions tagged memory flash layout nand or ask your own question.

10
Why must flash memory be written/erased in pages/blocks?
25
Why does flash memory have a lifespan?
14
How do NAND flash memory writes work?
1
Datalogging on serial flash memory
0
Fundamental reason why RAM is faster then second storage device
0
Looking into NAND Flash memory