What causes this knee in my MOSFET drain voltage drop?

@PeterSmith mentions an excellent resource on understanding gate charge specs in MOSFET datasheets in one of the comments below. 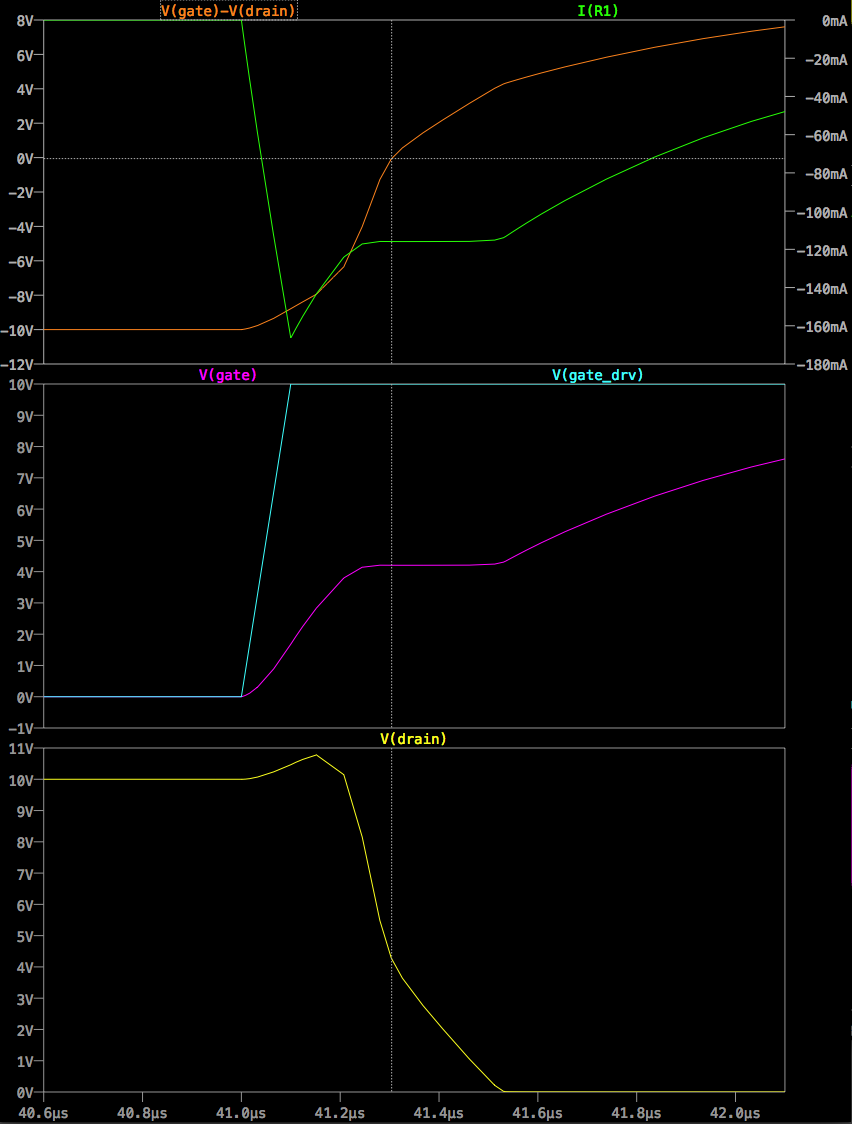 So if anyone understands what that driving mechanism is, I think that would be the right answer :)

I'm making a close study of MOSFET switching characteristics as part of my study of switching converters.

I've set up a very simple circuit like so: 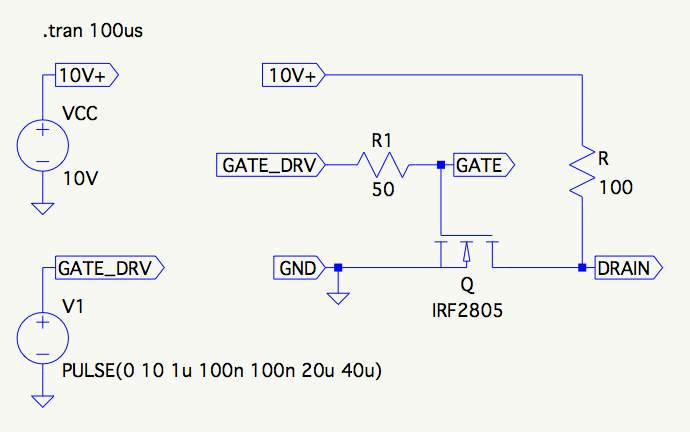 Which produces this MOSFET turn-on waveform on simulation: 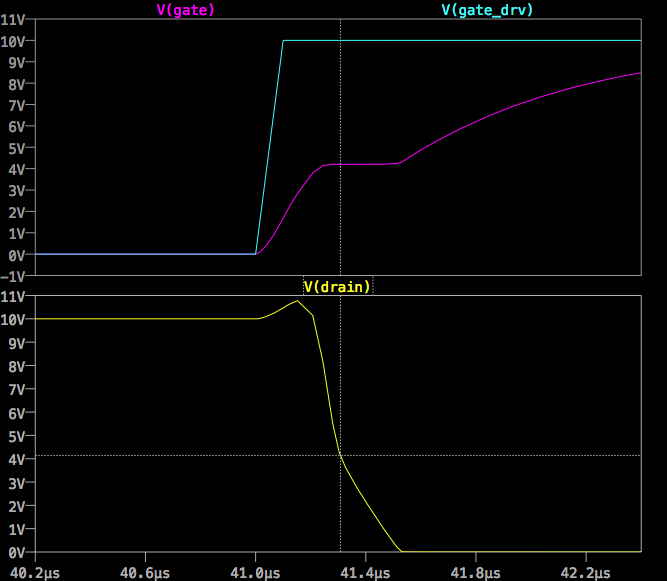 A knee appears in the drain voltage drop about 20% into the Miller plateau.

I built the circuit up: 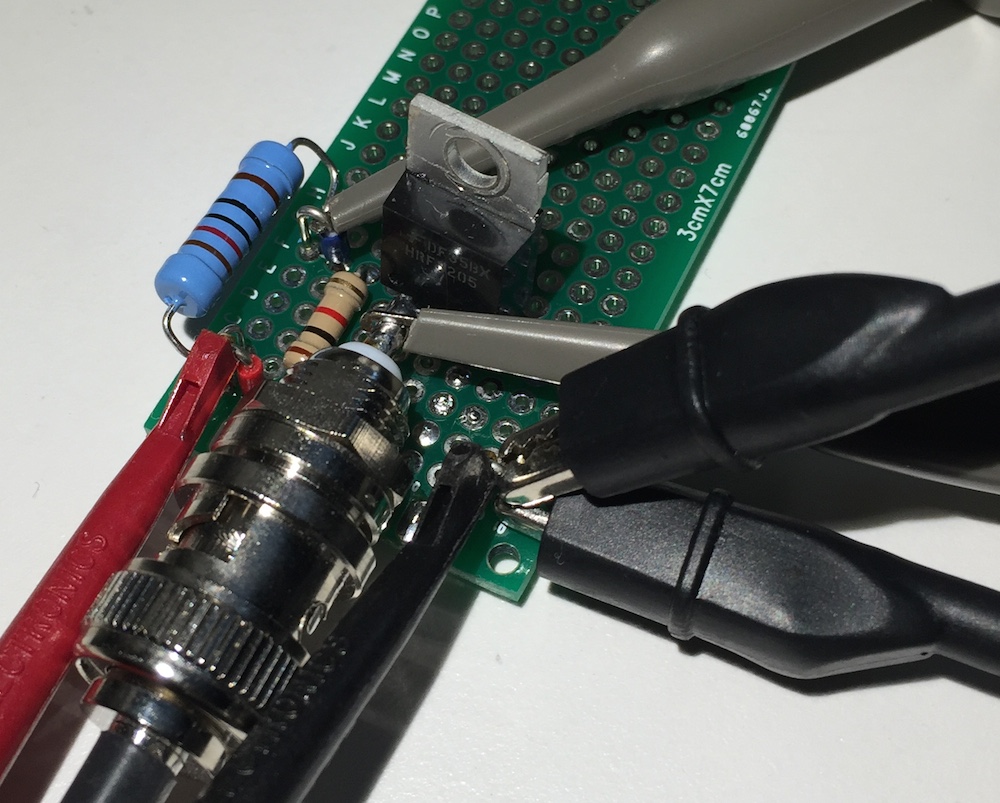 And the scope confirms the simulation quite well: 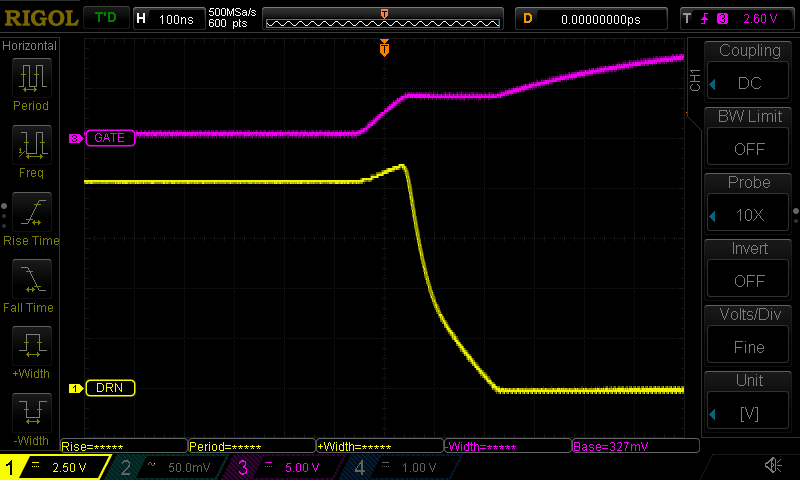 I believe I understand the "pre-shoot" bump (\$C_{gd}\$ charging current running "backward" through the load resistor), but am mystified as to how to account for the knee in the drain voltage drop.

Can someone more experienced with MOSFETs help me understand?

The slope of the drain voltage depends on the gate-drain capacitance Cgd. In case of the falling edge the transistor has to discharge Cgd. In addition to the load current for the resistor it also has to sink the current that flows through Cgd.

As the transistor transitions between saturation and linear region the value of Cgd changes and therefore also the slope of the drain voltage.

Using LTspice Cgd can be inspected by using the "DC operating point" simulation. The results can be viewed by using "View/Spice Error Log".

For a Vgs of 4V Cgd is much larger with around 6.5nF because of the lower Vds.

The variation of Cgd (labeled Crss) for different biasing can be seen in the plot below taken from the datasheet. 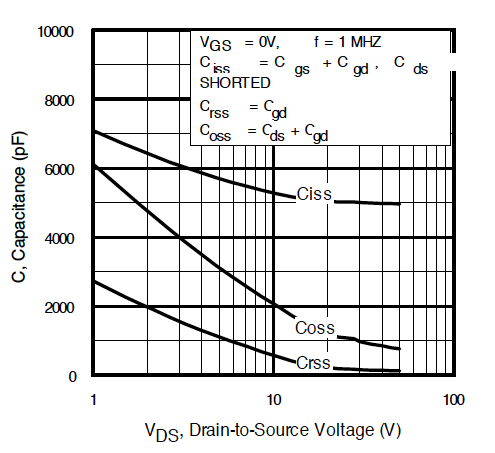 The IRF2805 is a VDMOS transistor that shows a different behavior for Cgd. From the internet:

The discrete vertical double diffused MOSFET transistor(VDMOS) popularly used in board level switch mode power supplies has behavior that is qualitatively different than the above monolithic MOSFET models. In particular, (i) the body diode of a VDMOS transistor is connected differently to the external terminals than the substrate diode of a monolithic MOSFET and (ii) the gate-drain capacitance(Cgd) non-linearity cannot be modeled with the simple graded capacitances of monolithic MOSFET models. In a VDMOS transistor, Cgd abruptly changes about zero gate-drain voltage(Vgd). When Vgd is negative, Cgd is physically based a capacitor with the gate as one electrode and the drain on the back of the die as the other electrode. This capacitance is fairly low due to the thickness of the non-conducting die. But when Vgd is positive, the die is conducting and Cgd is physically based on a capacitor with the thickness of the gate oxide. Traditionally, elaborate subcircuits have been used to duplicate the behavior of a power MOSFET. A new intrinsic spice device was written that encapsulates this behavior in the interest of compute speed, reliability of convergence, and simplicity of writing models. The DC model is the same as a level 1 monolithic MOSFET except that the length and width default to one so that transconductance can be directly specified without scaling. The AC model is as follows. The gate-source capacitance is taken as constant. This was empirically found to be a good approximation for power MOSFETS if the gate-source voltage is not driven negative. The gate-drain capacitance follows the following empirically found form:

In the model file the following values can be found

UPDATE: Mario got the right answer above, so leaving this one just for historical interest. This behavior looks to have everything to do with it being a VDMOS (as are many power MOSFETs I gather), which might explain why many of the general MOSFET resources (that tend to focus on monolithic MOSFETs) didn't mention this phenomenon.

Ok, just as I was about to give up on understanding this, the interwebs have granted me a morsel: 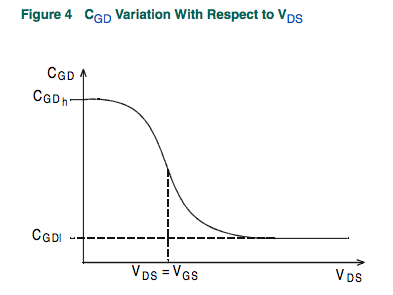 This is from IXYS Application Note AN-401, page 3.

There is no explanation of the device physics behind this, but I'm satisfied enough with this for now. This curve would well account for the inflection I'm seeing.

My attempts to explain it to myself with the dynamics of the channel inversion layer have ended in puzzlement. I see no clear inflection point in what I understand it to look like as when \$V_{GS}\$ = \$V_{DS}\$. (These are my best inferences, not something official I read somewhere.) Note that I used \$V_{GD}\$ here (\$V_{GS} - V_{DS}\$), somewhat unconventionally, knowing that \$V_{GD}=0\$ was what I was looking for :) 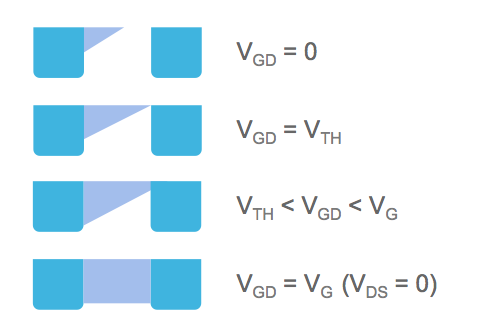 If anyone has a reference or knows the physics well enough to explain the curve above I'd be very grateful. I'll give the right answer cookie to anyone who can :)

I have a question: why should the slope be linear?

In fact, during 150 ns of Miller plateau, MOSFET channel resistance drops from almost infinity to a very small value. Even it drops linearly, the output voltage of divider formed by R=100 Ohms and R DS of MOSFET is not linear.

And there is non-linear dependence of R DS on the gate charge; you cannot find it in datasheets, but we know it is non-linear.

Therefore this behavior is natural.

To my mind, you have really nice test set-up, however, it is not good to drive power MOSFET from 50 Ohms source in real power circuit.

Not the answer you're looking for? Browse other questions tagged mosfet switches switch-mode-power-supply mosfet-driver modeling or ask your own question.