What's the differences of these usage of PNP, NPN transistors?

I am reading the book Electrical Engineering 101.

When talking about NPN and PNP transistors, the book said this:

And below are the example pictures quoted from the book showing different designs with different robustness. But I cannot figure it out why. 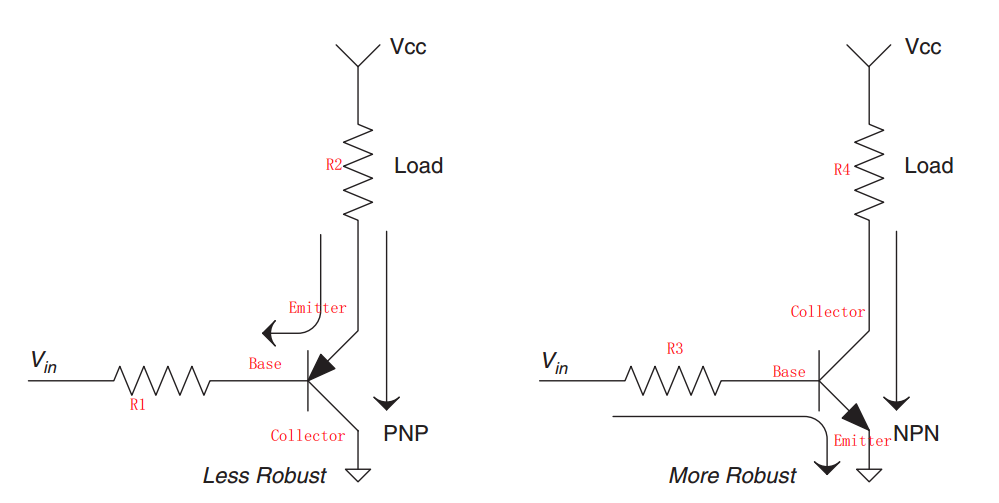 Thanks to Photon's reply, I found this reference: Active Mode of BJT.

If working in active mode, I think the voltage over Load is heavily affected by the Vin in ALL 4 pictures.

If working in saturated mode, I think the BJT are just switches and the voltage over Load are no different in each scenario respectively.

So how come the robustness difference?

When operating in saturated mode, the power consumption of the BJT can be substantially lower than when in active mode. This leads to less self-heating of the BJT, and probably a longer operating life.

Note my use of "may" and "can". This all depends on the resistor values being chosen appropriately for the application.

The two circuits on the left are the emitter followers. As the name suggest their response actually much depends on what is happening on their emitters.

Imagine the two circuits on the left are used as the switch to control the load. As the load current getting higher and higher, there will be higher voltage drop at the emitter thus effectively reduce the base drive of the transistors and makes them less conductive. This is some sort of negative feedback or self current regulation.

The "less robust" statement about those two circuits probably describe the ability of the transistors to act as an ideal switch in those configuration.

Ideal switch should exhibit very low resistance under all load circumstances, obviously the two left circuit won't do that.

In scenario 1, take the PNP on the left:

To fully turn the switch on, \$V_{in}\$ would need to go below ground to get at least 0.6V \$V_{BE}\$ which would require some source of negative voltage.

In response to the comment for the PNP in scenario 1, it takes at least 0.6V to turn on a transistor base-emitter junction; with this scenario, the lowest the emitter (the output) could go to is about 0.6V for 0V in.

The NPN on the right would need perhaps a volt at \$V_{in}\$ (depends on resistor value) so it would be easy to operate as a switch in a 3.3V or 5V application.

For scenario 2, with the NPN on the left, \$V_{in}\$ would need to go above Vcc by at least 0.6V to apply the full value of Vcc to the load, necessitating a separate (or higher at least) supply.

So as switches, the solutions on the right are easier to fully implement, which could be called more robust perhaps.

The 2 circuits on the right are called common emitter. By adding a emitter resistor here as well you can increase the linearity and stability (while decreasing the gain).

The 2 circuits on the left are called common collector.

I made simple table for you to compare the properties of both circuits.

12
What's the difference between NPN and PNP transistors?
55
How do I saturate an NPN transistor?
4
BJT Saturation Design Point?
1
Changing the path of a signal through multiple transistors with a single-poled switch
5
What (if any) is the leakage current through a NPN (C-E)?
1
High side switching
9
Using transistor as switch, why is load always on the collector
0
How do I implement a DPDT-switch here using NPN/PNP instead?
2
How can there even be an input voltage on a long-tailed pair?
4
Using a PNP over an NPN to activate a solenoid