Next we'll connect up the backlight for the LCD. Connect pin 16 to ground and pin 15 to +5V. On the vast majority of LCDs (including ones from Adafruit) the LCD includes a series resistor for the LED backlight.

If you happen to have one that does not include a resistor, you'll need to add one between 5V and pin 15. To calculate the value of the series resistor, look up the maximum backlight current and the typical backlight voltage drop from the data sheet. Subtract the voltage drop from 5 volts, then divide by the maximum current, then round up to the next standard resistor value. For example, if the backlight voltage drop is 3.5v typical and the rated current is 16mA, then the resistor should be (5 - 3.5)/0.016 = 93.75 ohms, or 100 ohms when rounded up to a standard value. If you can't find the data sheet, then it should be safe to use a 220 ohm resistor, although a value this high may make the backlight rather dim.

Now I'm looking at the datasheet of the LCD and I cannot figure out if the LCD contains a resistor, or not, and where to find the maximum backlight current and typical backlight voltage drop. I suppose I should be looking somehwere in these two lines, but I have no idea what's the difference between array/edge values:

After a brief search, I couldn't find a datasheet which is definitely for an LCD module with that part number.

Be careful - that datasheet is for Vishay LCD part number LCD-016M002B, which is not the same as your module's part number. Therefore, although lots of information is similar between the various 16x2 LCD modules, I doubt that it is the correct datasheet for your module, and exact details (including the LED backlights) do vary between different 16x2 LCD modules.

However I did manage to find a photo of the rear of an LCD display, which seems to be the same part number as you give: 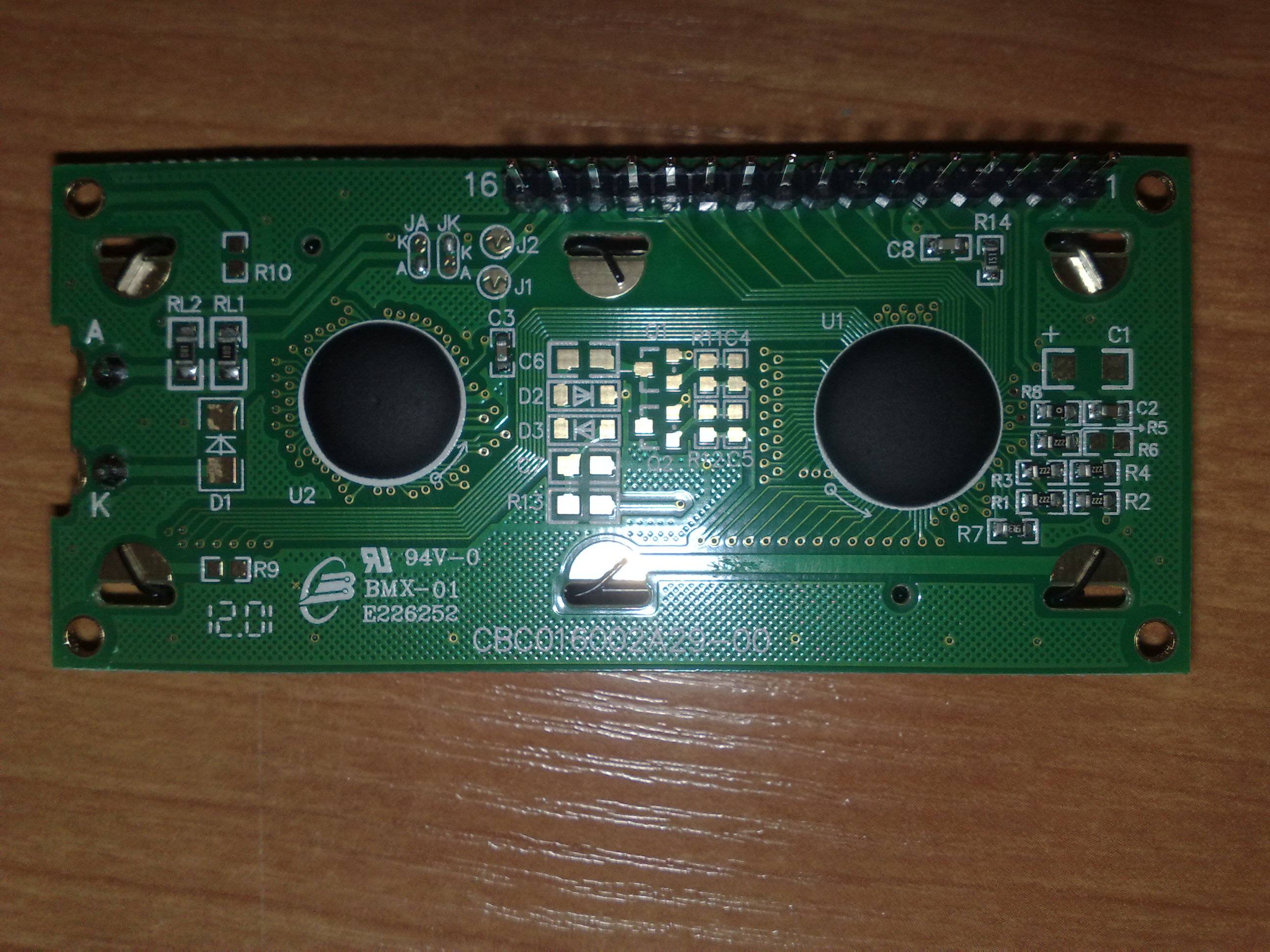 Look at the left side of the PCB, and you see two resistors, apparently in parallel, labelled RL1 and RL2 (where perhaps RL = Resistor [for] LED?).

Although it would need tracing with a multimeter, the connection from pin 15 on the LCD connector appears to go (using some solder jumpers and vias) through RL1 and RL2 and then to the A (Anode) pin of the edge illumination LED on the extreme left of the PCB.

Due to having those resistors on the PCB, the display in the photo would not need extra current-limiting resistors for its rated voltage on pin 15 (likely to be +5 V).

If your PCB matches the one on the photo, and it also has resistors fitted in positions RL1 and RL2, and (for completeness) you can measure their resistance using a multimeter between connector pin 15 and the A pin of the LED connection on the PCB, then it is unlikely that you need to add extra resistors.

However if your LCD module doesn't exactly match the one in the photo above (despite having the same part number), or yours doesn't have resistors fitted in positions RL1 and RL2, or you measure a direct short (i.e. a direct connection, with no significant resistance) between connector pin 15 on the LCD module connector and the A pin of the LED backlight itself, then you need to supply a photo of your specific LCD module and we can review that.

Note that this situation would be avoided if you had the real datasheet for that specific LCD module. This is why it is always important to have the datasheet for any device / component which you are using. :-) 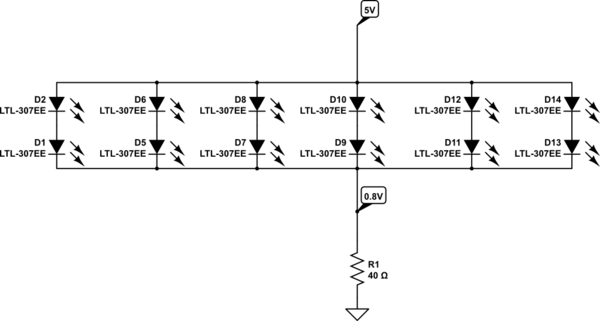 LED array is at the bottom of the screen. It has several LEDs like above, 6 parallel of 2 LEDs in series.

5
Controlling a 4.2V LED (LCD backlight) with a microcontroller
2
Resistor values for LED
0
Replacing a sound module's LCD/EL backlit display with a LCD/LED backlit display
0
Resistor programming of a boost converter, check my understanding?
0
Which resistor for my LEDs parallel
2
Setting current on Diodes Inc PAM2863 LED driver IC, with external resistor AND driving different voltage to VSET
5
How is a series resistor limiting the voltage for a diode?
0
How to determine resistor value for PWM signal?