Why is there current flow in the sub-circuits?

I'm struggling with the theory of this(unusual) circuit: 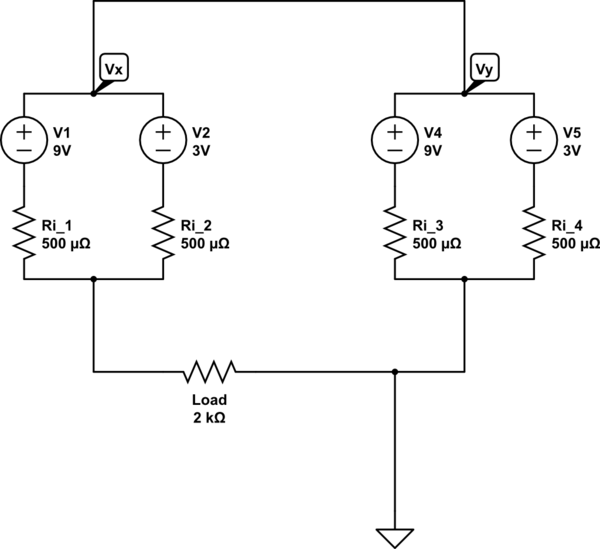 The load receives no power at all, due to the voltages cancelling out, yet the parallel sub-circuits voltages do not cancel out, and enormous current flows in each sub circuit. I dont understand why current in the whole circuit(even in the sub-circuits) is not equal to zero? If the voltage at node Vx is V1 - V4 = 0, likewise with Vy being V4 - V1 = 0.

I'm trying to understand how this is physically possible(for current to flow or shorting out in the sub-circuits) while the potentials are opposing one another, I tried looking at each branch and how it's possible for current to flow there but it's just difficult.

The reason why I think current flows in the sub-circuits, is because of them being shorted. But still lost with the concept while analyzing.

Step 3) Redraw the circuit, replacing the two subcircuits with their Thévenin equivalent circuits. From the Load resistor's perspective, this simplified circuit is equivalent to the original circuit.

Step 4) Use Kirchhoff's Voltage Law (KVL) to calculate the current in the simplified and equivalent series circuit. (Hint: Your calculated current should be zero amps.)

So the Load resistor has zero amps flowing through it, and each subcircuit (in the original circuit) is a 6 kA current loop.

TL;DR: I wasn't going to bother doing a full derivation and settle with a handwavy argument that we know the load current is zero because the two sub-circuits are identical and so the voltage across the load resistor will be zero, but I decided that it would probably not help very much, so full derivation it is.

Lets first consider the sub-circuit individually - you can't always do this, in fact frequently you can't, but because the two are identical, I know that I can. You have 6V dropped across effectively a 1mOhm resistor. As a result you are going to get large currents - 6kA worth.

Lets try to work out the voltage at the node \$V_u\$ that I defined earlier with respect to node \$V_x\$, or to put it another way, the potential difference \$V_{ux}\$.

Bringing that all together:

Now we have analysed each subsystem, lets calculate what the load current is. We know that the current flowing through load resistor will be equal in magnitude on each side - because currents through a series branch are always equal.

We know then work out the current through the load is:

We can see then that there is no current through the load.

I dont understand why current in the whole circuit(even in the sub-circuits) is not equal to zero?

(1) Consider just one of the sub-circuits: 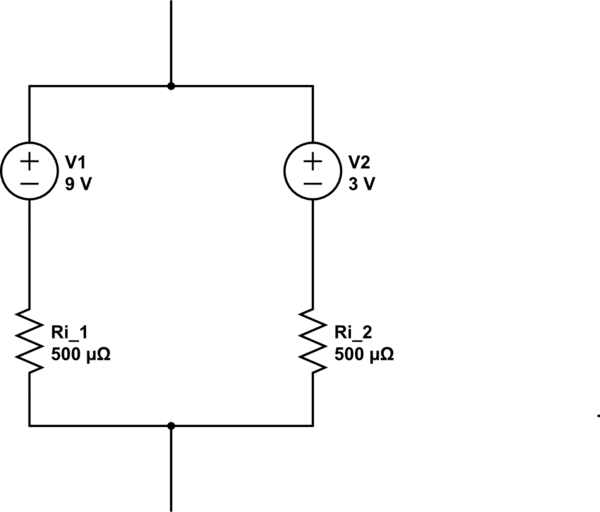 Clearly, there is a current \$I_1\$ circulating clockwise equal to

(2) Consider two of these sub-circuits that are not connected. They both have \$6\mathrm{kA}\$ current circulating clockwise.

(3) Connect a wire between these two sub-circuits as follows: 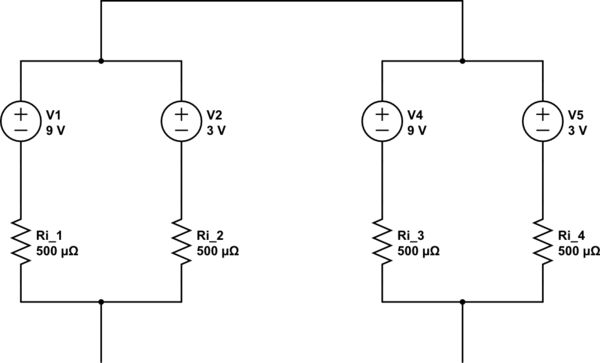 This does not change the operation of the independent sub-circuits, however, we can now define the voltage between the two bottom nodes.

Now, if there is a non-zero voltage difference between the two bottom nodes, one node is more positive than the other.

Thus, if we exchange the position of the two sub-circuits, the polarity of the voltage across the two bottom nodes will reverse.

The only voltage consistent with this is \$0 \mathrm{V}\$ and so we conclude that there is zero volts between the bottom two nodes.

A load resistor placed across zero volts will have zero current through and so, connecting a load resistor between the bottom two nodes does not change the operation of the circuit.

In summary, both sub-circuits have \$6\mathrm{kA}\$ current circulating clockwise but there is zero current through the load resistor for the reason that the two sub-circuits are identical.

Easiest way to understand is to consider effect of each supply individually.

V1 and V2 work against each other so current in each branch is 9kA - 3kA = 6kA (ignoring 3mA going through load).

Same analysis works for V3 and V4, but polarity changes, so:

But each source has 6kA flowing through them. All the power is wasted in sources.

Not the answer you're looking for? Browse other questions tagged current parallel series theory or ask your own question.

3
Why can't different current sources connect in series?
3
Equal voltage sources(different current capacities) opposing in series?
0
Will current flow beyond the diode?
0
Total current at the load?
1
Can current flow ever oppose a current source?
0
Does max current (amps) always flow through circuits?
1
Analysis of current flow at a component's edge
0
Confusion of how current can flow in a 1+ henry LR circuit
3
Why does there flows no current through the common part of the circuit?