Using a LED to transmit data

I am curious about the possibilities offered by LEDs to transmit data over a short range (2 or 3 meters), and what maximum data transmission rate can be expected from carefully chosen, but consumer-grade components. I am interested in a minimal hardware + "smart" (micro-controller) software solution.

So I see this as a two-parts design problem:

Things I am ruling out: I know about inexpansive and robust IR5 modules, but they are not designed for fast data transmission. I also understand that using coherent light (a laser diode) may provide better bandwidth. Also, no fiber optics: data would be transmitted through air.

The motivation for this setup would be as an alternative to power line communication (PLC) or Wifi; so a bandwidth in the 25 to 100Mb/s range would do the trick. This also explains the "no fiber" constraint, but some minimal reflector would be acceptable.

Considering the "across the room" distance I am considering, I think powerful / tightly focused solutions such as Ronja may be overkill (they have actually a much higher "minimal distance").

Considering the hardware part: you are positive in the high bandwidth I can attain with proper, "non phospor" LEDs. Are some colors better than other in this regard? What should I look for in datasheet to ensure they have this characteristic?

Considering the encoding: what would be better than Manchester for this usage? Something more bandwidth-efficient such as an RLL variant? I am more of a programmer than an electronics person, so I am more at ease with software encoding/decoding; but would some ICs help me with the decoding (which, as I understand it, is the hard part)? Should I consider some pre-filtering of the signal before decoding, perhaps by taking advantage of the frequency characteristics of the encoding protocol? 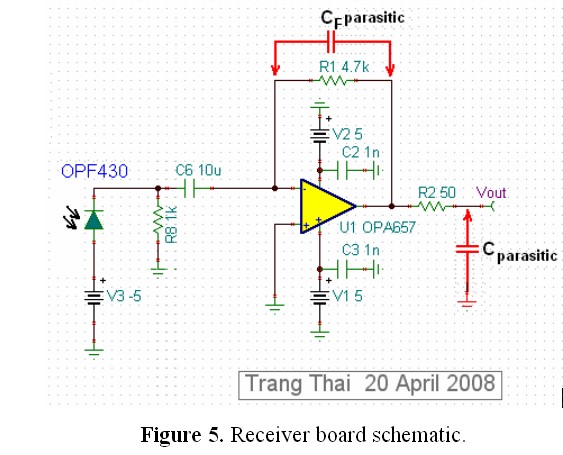 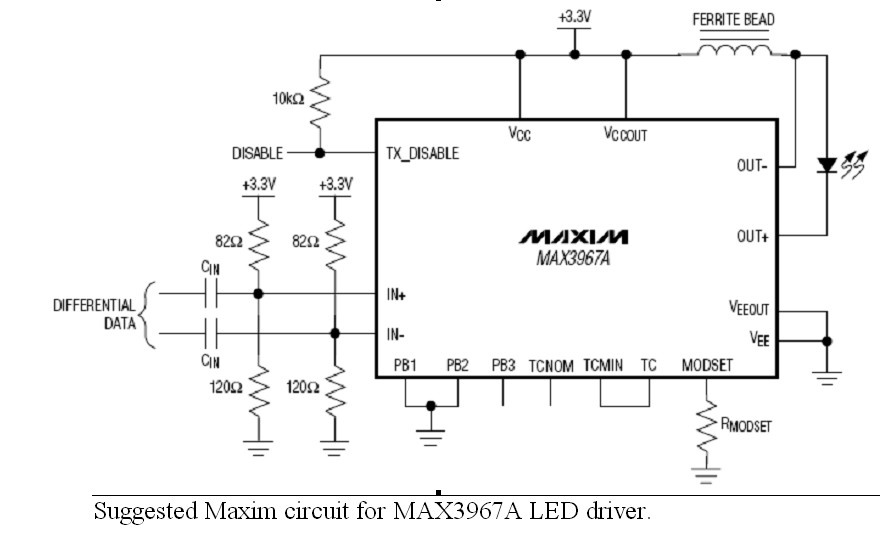 It turns out this is about right :-).

Real world reports indicate rates of 100 Mbps are achievable with White phosphor LEDS using relative simple methods - mainly filtering and equalisation, for a gain of about 25x over the "out of the box" rate of around 4 Mbps for a white phosphor LED. So - real world free air transmit:

Sufficient unto the morrow is the evil thereof.

Extremely comprehensive notes on optical semiconductor souces - see page 35 of 67 for LED modulation bandwidth. More theoretical than you were wanting BUT "sets the stage" for other material.

How to modulate a white phosphor LED at about 25 x it's unmodified bandwidth.

Well worth a look: This August 2009 "letter" shows how fast you can push a slow white LED !!!.
They use a white LED with phosphor response in the few MHz range, filter out the slow yellow component and equalise, to get 50 MHz modulation bandwidth, which allows on/off NRZ at 100 Mb/s.

They note that the achieved 50 Mb/s is 25x the unequalised unfiltered bandwidth.

I'd wonder, why not use a blue LED without phosphor?

Some practical limits and an easy means of extending them:

This abstract notes that InGaAsP LEDS are good for 300 Mbps at full power if you talk to them nicely (reverse bias off pulsing to sweep charge out faster) and 200 Mbps if you drive with non reverse bias.
They say:

Another way of arriving at max modulation rate

Here is a "through air claim of 400 Mbps over several kilometres using LEDs:

Gargoyle for MegaMantis (the optical link) and Powerbeat (the company) and Peter Witihera (the CEO and main ideas man) to see what you can make of the claims.

Probably the best technical comment you are going to get

But, caution Will Robinson ...

Despite the "no fibre" proviso, this may be useful regardless:

Over a few metres you MAY get away with plastic fishing line at sensible data rates and with enough power. I've seen it used for 100's of mm.

You can but fibre optic raw fibre bare - it's fragile and not a sensible choice.

You can buy optical patch cables for u"industrial" systems. Tese may be attractive after you read the performance spec for the std audio fibre optic cable.

Note there are multimode and single mode fibres. Over a few meters the former are very find indeed.

You can but optical connecting cables for domestic AV systems - highly available. You can even get them as standard XBox and PS3 accessories.

Lots of info here {Wikipedia} including the rather poor bandwidth and range achieved.
They say:

Many of these images link to relevant pages 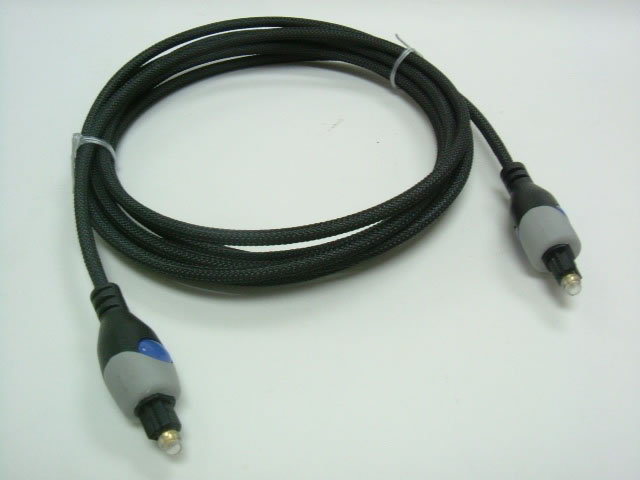 It would be helpful to know just how high a frequency you are interested in. I know of LED-based systems at 25 Mb/s and wouldn't be surprised if 100 Mb/s or so is possible. 10 Mb/s Ethernet over optical fiber using LED transmitters was once a fairly common configuration. Getting the highest modulation frequencies from an LED would require specially chosen LEDs and specialized driver circuits. To get the highest data rate you'll need to specifically look for low-capacitance devices.

Also, the systems I'm familiar with are optical fiber systems, not free-space. Free space introduces additional issues like multi-path dispersion (e.g. interference from the same signal bounced off walls or whatever) that could limit the overall system performance or require higher transmitter power. You'll also need to consider (or add optics to control) the radiation angle of the output from your LED.

Manchester encoding is beneficial in that it enables fairly simple circuits in the receiver to recover the transmitters clock from the data signal. In a free-space system it may also provide the benefits of a "carrier" signal in enabling the receiver to distinguish whether any signal is actually present or not. But it requires the transmitter to switch twice as fast as the data rate, so is likely not the best if you're trying to squeeze the maximum data rate from a given LED.

Incidentally, encoding at the level of Manchester is not normally considered a software function -- it's more likely to be done by a dedicated digital circuit.

Not the answer you're looking for? Browse other questions tagged led communication encoder optoelectronics or ask your own question.

10
Difference between a bus and a wire
0
Transmitting data over light with USB
2
Low cost simple communication between two microcontrollers
27
Serial protocol delimiting/synchronization techniques
1
Differences and conversion between encoding techniques (NRZI, Manchester, MLT3)
1
Lightweight point to point communication protocols
3
How to transmit data over a long distance at a affordable price
1
UART Data Transfer Across Modular Boards
0
What is the best way to get a receiver in sync with clock? Manchester encoding