Why are Edison screws allowed to be used? [closed]

Why are the Edison screws allowed to be used? They seem unsafe. Why are they designed that way?

While they let you use a lamp fixture which has an exposed hot contact when you remove the lamp, and nothing is there to protect your finger from touching it.

I would expect this socket to have a different design which will cover the contact from accidental touch. 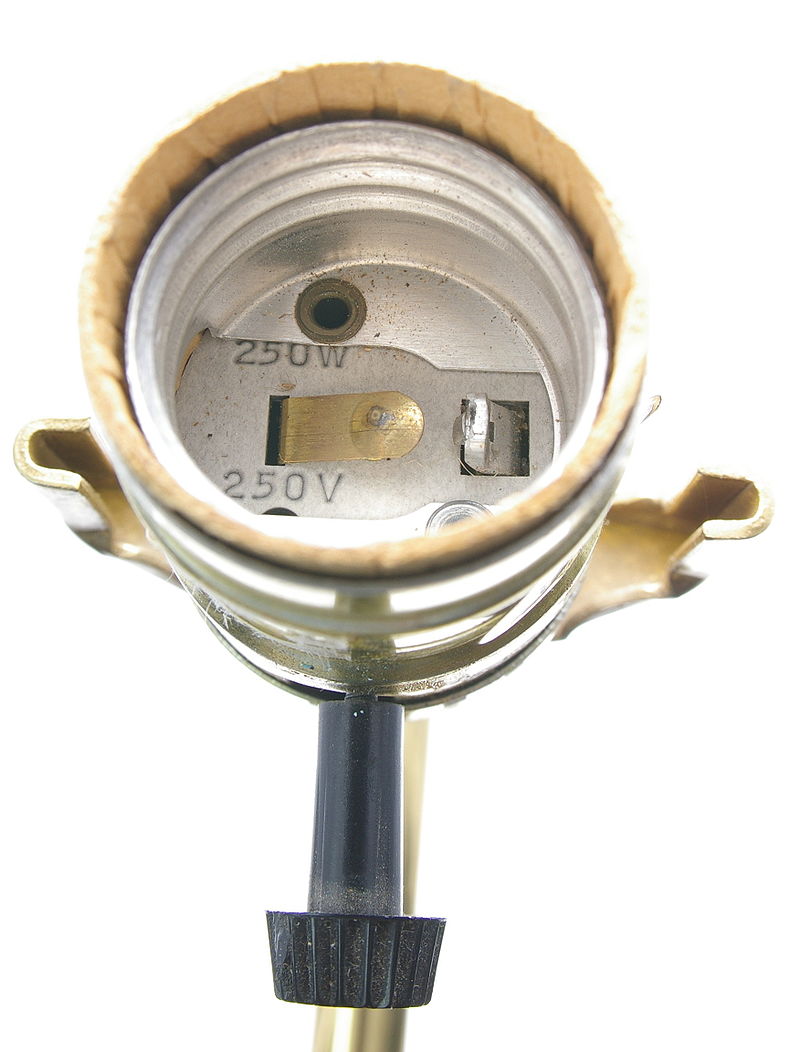 Here's your opportunity. The market's looking for that right now so build a better mousetrap.

The USDOE and California CEC want to murder the Edison base to finally stop people from using incandescent bulbs, and enable fixture designs that don't have to worry so much about dissipating heat. They mandated GU24 in 2008, which solves some of your concerns. Take a look at how that's going 8 years later. LOL.

There are several flaws in the GU24 that you should address in your new design.

The Edison lamp base design dates predates all twentieth-century safety regulations (because it predates the twentieth century altogether). Having light bulbs screw in and out is not great in environments where vibration is a problem, and replacing a bulb which has just burned out while in use may require use of a cloth to hold it, but it is generally advantageous to have a lamp which can be inserted or removed by handling the bulb rather than having to mess with the holder. Making a metal thread assembly that can mate reliably with a metal socket is easier than trying to mold threads into glass, and having one contact in the center of the socket is easier than trying to have two concentric contacts.

While I doubt the Edison base would be approved by any safety agency if it were being introduced as an entirely new product, it has been effectively "grandfathered in" because it has been used for a long time, people are familiar with it. A "safer" design that people aren't familiar with might lead to more accidents than the century-old design which, for all its imperfections, is well understood.

Nobody answered why were they designed that way?

I recall it was for practicality and cost of manufacturing.

I heard about it indirectly, on a TV show about Tesla. He was contracted to provide lights as Edison's competitor, but could not use Edison's patented sealing/base method and had to use his own which lacked the advantages.

Trying to find more about it, I think the point works like this: you seal the glass capsule and shape it like a bottle top easily enough. The fitting needs to slip over that, and be simple and cheap to make. The contacts along the outside surface of the simplest cap shape is the simplest. Naturally the contacts will be co-axial, and you need at minimum 2 metal areas separated by insulation. Making one of those parts be the thread as well saves components and joints. It also becomes easy to connect the emerging wires to the cap without any alignment.

In short, it's the simplest possible fitting to manufacture.

From the link above, the author quotes Alan Makkos,

The familiar screw-in base was a whole other can of worms. Edison’s first bulbs slipped into their sockets without a way to secure them, until he was struck by a utilitarian design while having lunch in his workshop. “Edison saw a can of kerosene on a shelf, and said, ‘Oh, the lid for that kerosene would make a dandy screw base for a light bulb.’ So they got the can down, cut the lid off with a band saw, and made a light-bulb socket out of it,” says Jenkins. “By the time they were in production in 1885, they had reduced the size of the base quite a bit, and it looked a lot more like modern bulbs.”

Today's sockets for incandescent or CFL lamps (and now some LED lamps) come with a black and a white wire. The white wire is neutral and is connected to the outer "threaded" part. The black (hot) wire goes to the center contact. I have checked this myself with an ohmmeter to prove it.

On the old 'Edison' sockets you have 2 brown wires. The light brown wire with ridges is the neutral, and connects to the threaded part of the socket, allowing a bulb to be replaced with no shock hazard. The other darker brown wire is the 'hot' wire to the center connector of the socket, coming from the light switch.

The socket is wired this way so that whilst screwing in a bulb the neutral makes contact first, and the neutral line should have just a few volts on it at most, depending on if it is a 'shared' circuit with other loads. All neutrals are grounded at the main breaker panel to keep the voltage low (<10vac) on the neutral wires even with active loads throughout a house, apartment, etc.

Touching the threaded part should not cause a shock - ever! If it does then the wires to the socket may have been reversed, either at the socket or the light switch for that socket. Even if it is a socket for a 3-way bulb, the threaded metal part is connected to neutral.

NOTE 1: A high wattage device such as a space heater far from the breaker panel could have 10vac on the neutral connection at the AC outlet, but 10vac is not a shock hazard even if you found a way to test if it is a shock hazard.

NOTE 2: Without a bulb screwed in and the power turned on, there is a 220vac shock hazard present. For European light sockets, it is 4 times the energy of American sockets running at 120vac if someone touches the center contact. Most light fixtures are above the reach of children, but not desk-top lamps. Best solution is to always keep a bulb screwed in-don't leave light sockets open.

For information on what constitutes a shock hazard in terms of neutral voltage, I found this article here.

I suppose the real answer is because we don't live under a completely tyrannical government. People have been living with this type of socket for over a hundred years. This design has a lot of hours on it, and people understand how to use it, and are generally aware of the risks. Any competing design would have to convince, not only the government officials responsible for building codes, but enough of the population so that those government officials don't get replaced come next election. There is a market, and when people realize a clear benefit to any given solution, they will switch. Although you have pointed out some flaws in the legacy design, you must realize that each user does not attach the same weight to those flaws as you do. There is also a potential well that a new design must overcome, where it's benefit must outweigh the additional cost or inconvenience of using the new design.

Not the answer you're looking for? Browse other questions tagged safety light or ask your own question.

318
Why is there so much fear surrounding LiPo batteries?

24
Why are some AC outlets and plugs polarized?
1
Why are handheld devices always backlighted nowadays?
7
Cooper Bussmann's screw-in Edison-base mini breakers aren't for inductive loads. What does “inductive” mean?
3
Are touch lamps safe?
0
Ground wire in custom capacitance-dimmable metal lighting fixture
1
Newb question: Is it OK for the outside of my power supply to touch these metal brackets and screws?
1
LED light fixture glows when not turned on