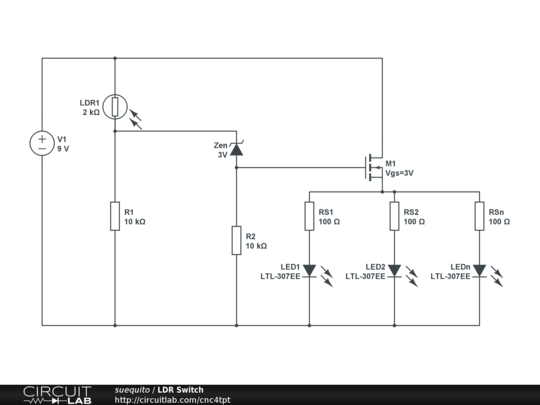 Im trying to build this circuit for my radio station. I would appreciate som help.

Well basically I have more than one question, but lets start with the main focus. So the whole idea of using the Zenerdiode is that I want that when the light is of (the LDR is attached to a tiny LED-lamp on the mixerbord, wich goes on if someone is calling the radio station) and the LDR has a value about 5 MegaOhm, there is not enough voltage over the Zenerdiode, making it act as a open (no current passing through). In that case, in my opinion, there will be no current and likewise no potential relative to ground in the point between the diode and R2. This would close the transistor. No light on the mixerboad, no LED1 2 or 3 is lit.

My main problem, and the reason why I designed it like this is because it is really important that the transistor is acutally "closed", and the LEDs are not lit when they are expected to not be lit. Basically, I tried to quantify a "light on" (on the mixerboard) with a specific voltage on the gatepin of the transistor, via the zenerdiod.

Not the answer you're looking for? Browse other questions tagged led transistors switches analog ldr or ask your own question.