Why should we set input source equal zero for calculating output resistance of common source amplifier?

What I don't quite get here is why we should set the input source equal 0 for calculating output resistance. Why? 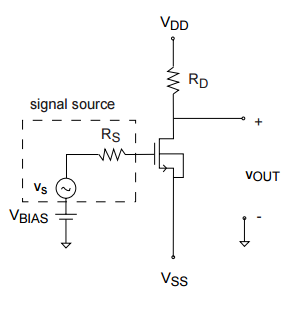 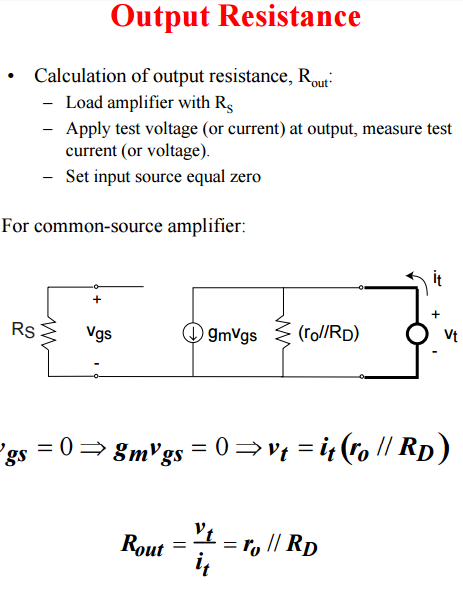 My answer is written as if dealing with a real circuit amplifier but the same principle is involved when calculating values.

You don't have to set the input source to zero if you want to do it the harder way.

That harder way would test the impedance at a specific frequency other than what the input source is producing then you would use a tight band-pass filter (or fourier/spectral analysis) to analyse JUST the signal at the frequency you want to measure and calculate output impedance.

Yes, you can do it that hard way or, just set the source voltage to zero and do it the easy way. Alternatively you can use the input signal to generate a voltage and then place a load at the drain/collector and when that AC voltage seen drops to 50% you have the equivalent of the output impedance.

My answer in one sentence: When you try to determine the current through the unknown output resistance (caused by a voltage source that is connected at the output node) there must be not another current caused by the input signal.

The reason is that when you try to get a Thevenin equivalent circuit, using the 'test source' method, you set all the independent voltage and current sources to zero. However, you keep the dependent sources intact.

The large signal input source (the bias voltage) sets the dependent current source \$g_{\text{m}} v_{\text{gs}}\$ of the MOSFET because it determines \$g_{\text{m}}\$ and other small signal MOSFET parameters, so it can't be entirely ignored. Once it is used to determine the dependent sources it too is turned off.

Because of the topology of the circuit, 0 input means \$v_{\text{gs}} = 0\$: the MOSFET has ideally infinite impedance looking into the gate, so no current can flow through \$R_{\text{S}}\$ and thus there is no voltage across it. It turns out that the dependent current source \$g_{\text{m}} v_{\text{gs}}\$ is 0 as well.

Let me cover it all, DC signals are neglected in small signal analysis(when amplitude of signals is quite small) because they cause constant current and provide a bias level, so pretty much neglecting them will be like neglecting a constant in a phase or frequency dependent equation which makes it simpler to understand.

Ok there goes the DC sources

MOSFET have pretty high input impedance means nothing or no current flows through the gate terminal, that is shown by a open(red) at Hybrid-pi model of small signal analysis,

Now we know that the conductance of the channel in the MOSFET is effected by the voltage at the gate terminal, but the input circuit is isolated from the output circuit, this relation is established by concept of transconductance, which is the ratio of change in the drain current to the change in the input gate voltage vgs(where small v and gs represent the small signal nature of the source).

Which states that the current from two sources in any branch of the circuit(linear circuits) is independent of other sources, and the resultant current is the algebraic sum of current calculated when individual sources are acting alone.

Hence here by grounding we are removing the effect of the input voltage, which also makes the gm.vgs(where Is=gm.vgs is a dependent current source with dependency upon vgs) acting as a current source zero, hence now we can calculate the sole resistance of the channel by connecting a small signal source vt at the output when the small signal input is zero.

Though the vgs doesn't play a direct role but works as a Transconductance amplifier, hence the effect of other power supply is removed by grounding vgs.

You are considering the small signal model so we have to short all large signals. But in your case you also have a small signal source at the gate(input) . As many have already answered, its just a matter of perspective. You want to measure the output resistance.

Even when you consider any normal circuit in real life and when you have to find the resistance of it with a multimeter. You de-energize all the sources (Short independent voltage sources and open circuit independent current sources) and then measure the resistance. So in your case also you do the same. You could of course have the small signal source \$v_s\$ (large signal source \$V_{bias}\$ should be shorted by any means because you are doing a small signal analysis and all large signals should not be considered) but now if you try to calculate the resistance from the output it would be incorrect because you have other sources influencing the resistance, one case where we need to have it is when we are findinng the transfer function where you need to find the \$V_{out}/V_{in}\$. So to find the output resistance we short the source, since \$V_g=V_s=0\$ and \$V_{source}=0\,(\text{gnd})\$, \$V_g-V_{source}=V_{gs}=0\$. So \$g_m*V_{gs}=0\$, this is what is done in the equations you have mentioned.

Simply, the measured test current would be the sum of the circuit response to both the test voltage and the source voltage, and an incorrect output resistance calculation would result.

Not the answer you're looking for? Browse other questions tagged mosfet circuit-analysis resistance small-signal common-source or ask your own question.