What would be the best method for preventing damage to multiple audio input devices that are connected to a home made audio patch panel?

Im wanting to make a device or cable where I can connect multiple 1/8" 3.5mm stereo audio sources, and have them output thru a single lead/port/connector.

My concern is potentially damaging the other sources by having the signal/voltage feed back to the others because all the leads would be interconnected.

The sources would be low power devices like mp3 players and cell phones.

I don't know the terminology, but im basically looking for an electronic "check valve" that would prevent signals from one device back-feeding to the rest, while (preferably) not inhibiting the signal strength going to the output port.

Edit: So what I'm looking to do is make a device or wire for connecting my phones audio out via headset Port, and my xbox ones headset (headphoneout + mic in... On the controller) to my headset with mic, all at one time. The console doesn't support background music, so id like to mix the game audio and phone audio into a single set of headphones, while having the mic feed return to the controller.

The "damage" concern is that I'm worried about damaging my phone by running xbox audio, but not phone audio, and having that signal voltage back-feeding into my phone audio out Port (or vice versa). Idk if that should be a concern or not, but for peace of mind, I would rather not have voltage going into an out Port on either device.

Hence the "check valve" reference. Something that would allow voltage to move forward, toward the headset, but preventing it from running back to the other device. Hope that makes sense.

More or less, I could easily make a Y adapter that has 3 female trrs Jacks, then connect all devices, but im wondering if I should put a resistor or something on two of the leads to stop or lessen voltage from device A going back to device B, but allowing both to flow freely to the Headset.

EDIT 2: I found this diy inout mixer in my searches that seems like it would be what I need. Can you check it out and give me feedback on the design, and if it seems 'proper'? Thanks.

The circuit you are looking for is called a "passive summing circuit".

It consists merely of resistors. The circuit does not completely prevent a device from backfeeding the rest, but it ensures that if two devices are driving a signal, they will not be damaged.

There are numerous circuits and references available from a quick web search, but here is an example: 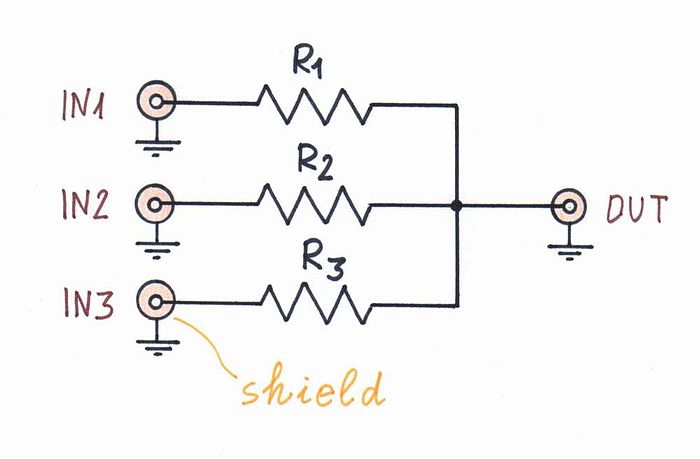 You can add inputs as needed, to a certain extent (a large number of inputs may require an active summing circuit).

In your case, you also want stereo, so you need two circuits, one for each side (L/R). As for values, they're non-crucial, but they should be equal, and in the range of 5kΩ to 25kΩ. Others may have stronger opinions on values. 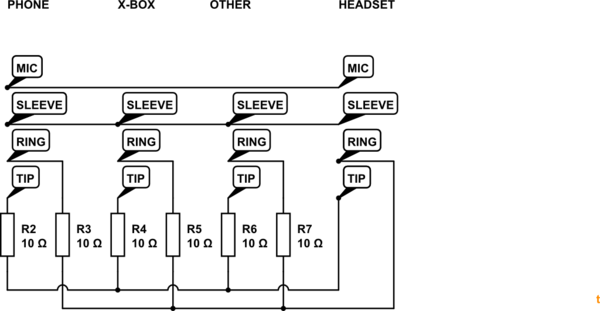 This is the simplest circuit but suffers the reduction in volume as the output signal strength will be given by:

If you want to restore the original volume you'll need to put an amplifier with a gain of 3 feeding each channel of the headset socket. In that case increase the resistors to 10k and use something like the LM386 amplifier chip. There are thousands of example circuits on the web.

Not the answer you're looking for? Browse other questions tagged audio diy mixer mp3 or ask your own question.

0
Why are resistors necessary in a summing audio circuit?

1
Broken headset, repaired, but microphone doesn't work on computer, does work on phone
3
Join the microphone and audio lines from a headset for recording
1
Resistor values for a passive audio mixer?
1
3.5mm Stereo output to 3.5mm mic input crossover
2
Line Level to Mic Pad Working Randomly With Phones
2
Why would credit card reader over audio jack not work on some devices?
0
How do I create a subtractive or dffferential two channel audio mixer?
0
Connecting Headphone to Phone and Laptop via Switch