When trying to delete a via that I placed in the board manually I get this error. The via (yellow error) was placed to stitch the ground planes together and has nothing to do with the schematic.

Why am I getting this error?

I'm using Eagle 6.6.0 on a windows 10 64bit machine. It seems eagle started acting weird when I went to windows 10. I did a completely clean reformat and install. 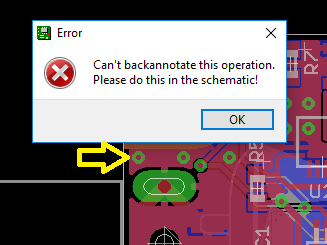 Eagle doesn't allow you to delete nets from the Layout window. This is done very specifically to prevent you accidentally deleting an air wire and then changing the schematic.

Vias have to be assigned to a net. This means that when you place a via manually, it has to work out what net to be on. If the origin lands exactly on the centre line of an existing trace, it will be assigned to the existing net. However, if it doesn't land on a trace, then a new net will be created just for it.

Because the via is always assigned to a net, if you use the delete tool on the via it implies that you want to break the connection that the via is making - this would be a specific type of back annotation which as per the first paragraph is not allowed under any circumstance.

Using the ripup tool as @DaveTweed suggested in the comments circumvents the issue because it instructs Eagle not the break the net up, but just to remove the via leaving an air wire in its place.

If you run the ratsnest command, it determines that the air wire that was left behind has nothing connected to it - the net has no sources or sinks - and also that it has no corresponding wires in the schematic. As a result it now knows that it is free to delete the net.