(I am mainly from a software background and just started to work on an embedded platform. Excuse me if this is a naive question...)

I am planning to write a driver for an EEPROM which is connected to the MCU via an I2C bus. So I am reading a tutorial about the I2C bus.

Both SCL and SDA lines are "open drain" drivers. What this means is that the chip can drive its output low, but it cannot drive it high. For the line to be able to go high you must provide pull-up resistors to the 5v supply. There should be a resistor from the SCL line to the 5v line and another from the SDA line to the 5v line. You only need one set of pull-up resistors for the whole I2C bus, not for each device, as illustrated below:

The red part in the above image is added by me. I guess that's how the whole picture is.

I searched a bit but seems cannot find a clear explanation...maybe an analogy will help.

Is my adding of the red MCU correct?

Not exactly. The MCU is just another member of the bus like the rest of the Devices. There is nothing particularly special about how the MCU operates on the I2C bus. The MCU can recognize when either line is high or low, and the MCU can pull on either (or both) of the lines itself in order to communicate with all the other devices on the bus.

The bold part the chip is the red MCU, right?

It implies that the MCU is somehow different than the other devices on the I2C bus. But in reality, it is NOT special.

Why the chip cannot drive it high?

If you understood the nature of passive pullup, open-drain busses, you would understand that is not a proper question. You don't WANT any of the devices to drive it high because that would completely preclude any communication on the bus. The devices can only communicate if they can pull the bus LOW so that all the other devices on the bus can recognize that activity is taking place.

What does the open drain mean in plain English?

It is just like the signaling system used on many pubic transportation vehicles. There is a long "rope" along the length of the car, and ANYONE along the line can pull down on the "rope" to signal that they want to get off at the next stop. If you fixed the "rope" so that it was always HIGH, then nobody could pull on it to signal a stop.

"The chip" refers to any I2C device; generally, the master will drive the clock, but SDA is bi-directional as the slaves have data to transmit back. Therefore both the master and slaves are capable of tugging on SDA; advanced devices may also be able to toggle SCL in addition to the master.

A simple analogy for open drain is a bus, and the rope / harness you use for signaling the driver for a stop. Everyone on the bus can yank on it and pull it down, but tension in that line will pull it back up after you release it. The strength of the pull up + the capacitance in the line will determine how fast you can run.

Electrically, it's generally a pin with a N-channel MOSFET that can be turned on to sink current and pull the line low. Releasing the FET / turning it off allows the pull-up resistance to restore the bus value to '1'.

I searched a bit but seems cannot find a clear explanation...

A pretty clear one is here (which is where Wikipedia takes you if you type in "open drain"). 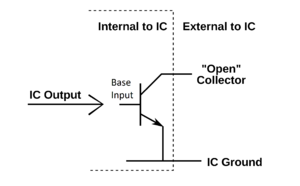 Sometimes they call this a "wired-OR" or "wired-NOR", but it seems to me to be most accurately called a "wired-AND". The value of the line is 1 if and only if all of the outputs are logic 1. If any output goes to logic 0 the entire line goes to 0.

That's what open drain means. Your red MCU is just another I²C device except it might be the sole driver on the wired-AND SCL line unless clock stretching is happening (any of the other I²C devices can hold the SCL line low if they want to and that should hold back the read or write cycle on the SDA line).

It is both true that any I²C chip can not and must not drive the SDA or SCL lines high. The only thing that can pull the lines high are the two pull-up resistors connected to +VDD.

(Thanks for all the replies so far. After days of reading the I2C tutorial and various related materials on the SparkFun site, all these replies start to make sense to me now. And below is my own summary.)

This jargon just described how the circuit is built. Just as described in robert bristow-johnson's link, the open-drain/collector circuit has a BJT/MOSFET between the real IC output signal and the exposed IC pin. It is the BJT's collector or the MOSFET's drain get exposed (I think this is what the open is meant for). And a pull-up resistor is usually connected to the pin externally to the IC. As shown below: 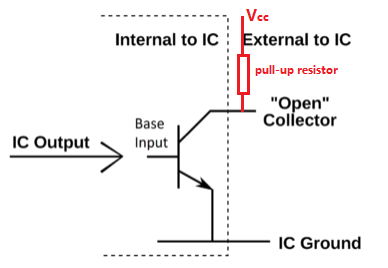 It is the resistor pulling up the voltage rather than the IC offering a high voltage signal, so I guess this is what Richard Crowley mean by passive pullup.

If all the devices' output pins on the line are using this circuit, it will be impossible for some voltage drop to happen between 2 device pins. So no 2 devices will be short circuit.

2
Why are pull-up resistors not drawn this way?

3
How many pull up resistors per I2C bus
5
Why do I2C lines use open drain driver instead of tri-state drivers?
0
Noises on the I2C BUS
22
Why I2C designed to work with pull-up resistors and not pull-down ones?
1
HAL I2C hangs, cannot be solved with standard routine use to unlock I2C
0
I2C bus isolation for dummies
0
doubt when Arduino connects to multiple i2c devices
0
I2C Communication Open drain benefits vs Push pull
0
I2C Bus getting Locked UP on Single Master - Single Slave System
1
Confusion about open-drain for I2C