what dependence does the intensity of a normal LED(the one used for DIY projects) follow with respect to distance? [closed] 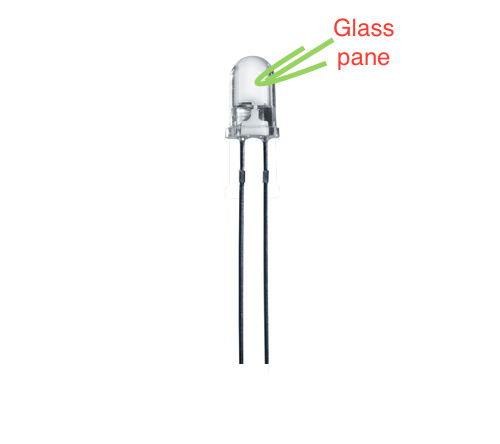 What is the dependence of my led's output with respect to distance.

Is any of the two right? If not, then please give some details of the right proportionality.

There is no physical concept of "dependence of energy", but I believe you are just trying to describe the relationship between energy output and energy received at a given distance.

Since energy is a cumulative term, we usually refer to its accumulation rate (flux) instead. By analogy, think of energy as the amount of water in a bucket. We could have a bucket with a small opening, that admits only a small flow, we leave under the faucet for a long time -- or -- we could have a wide-open pail that will accumulate the same amount of water in it in a very short time.

To make a meaningful water measurement, we need to standardize, not only time (instantaneous energy is called power), but the size (area) of the opening we are using to make our measurement. In radiative energy, we call this measurement Intensity.

It's that simple. This has nothing to do with LED's, glass, DIY, or anything other than basic optics.

In three dimensions, for a source emitting energy uniformly in all directions the intensity drops off as $$\frac{1}{R^2}$$ where r is the distance from the source.

Your assumption about an inverse-square law is not valid here.

It's called a Lens

See that part above about uniformly in all directions? That plastic lens on your LED makes that assumption incorrect. Lenses focus the radiated energy into a smaller area, thereby increasing the initial intensity and decreasing the rate at which that intensity is lost to distance.

In RADAR and other EM antenna design, the expression dBi is used to define the gain of an antenna system relative to an isotropic radiator at radio frequencies.

In your question, the "area" is actually the area of a sphere of radius R that surrounds the source of power output P:

That's the surface area of a sphere in the denominator.

However, you are not emitting into the entire sphere, just a narrow cone that the lens constrains. Let's define a term L, which represents the reduction factor in illumination caused by the Lens.

A_lens is the surface area of the sphere above the orange latitude.

To find "h" in the figure, we need to know the lens' radiating angle (this is typically 30degrees half for the type of LED in your picture, but exact value will be available in the part's datasheet).

Using trigonometry we can find...

and therefore the lens area...

Putting it all together, we see that power does not decrease at the rate of the inverse-square law, but substantially better -- by a factor of A_lens:

where theta is the half-angle of radiation of the lens. Most datasheets will report the full-angle, so be sure to divide by 2 before plugging into this formula.

Not the answer you're looking for? Browse other questions tagged led physics optics or ask your own question.

2
connecting an LED to a (sideglow) fiber cable
4
Powering RGB LED's and using a PWM chip; series or parallel?
9
What are the tradeoffs for the various options coupling a LED to an optical fiber?
3
LED wiring questions with 9v battery as power source
0
Looking for advice on new led project
0
Drive IR LED with maximal power (for IR barrier with max distance)
25
How are LEDs considered efficient?
0
Controlling a lot of 14-segment LEDs
0
Is my wiring for this 5m 2812B Led Strip correct?
1
Powering a LED strip