Electrons of the current in a circuit?

Electrons are present in every atom. 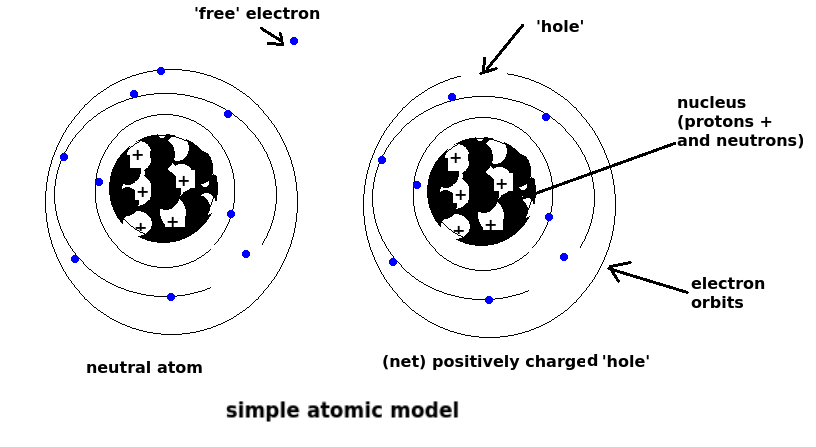 In materials such as metals (good conductors) the outermost electrons are very loosely bound to the nucleus and tend to wander around randomly in the material matrix leaving 'holes' in the normally neutral atom's electron structure.

These 'free' electrons take their energy from thermal energy. Any individual electron (negative charge) wandering by a positively charged 'hole' will be attracted and may fill the gap. It may then sit there for a while and move off. Its a very random/chaotic process.

The result is that the material stays electrically neutral even though billions of free electrons are randomly wandering about in all directions at any given time. There is no net drift in a particular direction.

In a battery we produce a potential difference or voltage by accumulating and maintaining a surplus or decifit of electrons at the terminals. Note that the charge is produced in pairs so there always equal amounts of electrons and holes.

One terminal is positive (electron deficit, hole surplus) and the other is negative (electron surplus, hole deficit). This accumulation and maintenance of excess charge requires energy provided by a chemical reaction inside the battery. 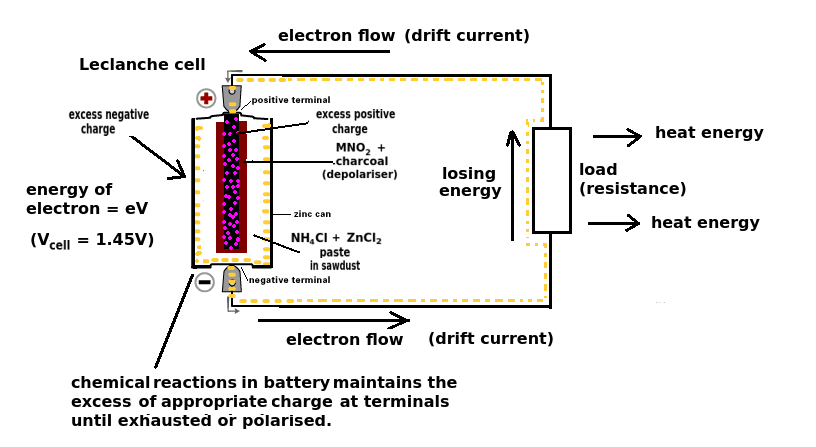 When a circuit is made current flows almost instantly. This depends upon the wire but is somewhere between 0.5 and 0.9 times the speed of light.

This cannot be the physical (drift) movement of electrons due to the applied electric field as the drift speed of electrons is much (much) lower (see https://en.wikipedia.org/wiki/Drift_velocity). It must be an electro-magnetic wave.

A thought experiment: Imagine at the negative terminal end of the battery one (excess) electron moves from the terminal into the wire . This minute pulse of current (change in electric field) is transmitted through the wire at near the speed of light and pushes one electron out of the wire into the positive terminal of the battery to retain the overally electrical neutrality (balance) of the circuit

Now imagine this happening to billions of electrons. The result is what we term current.

The force that moves the electrons is an electric field produced by the voltage difference between the terminals and the basic rule is 'like charges repel, unlike charges attract'.

Electrons will be repelled by the negative voltage and attracted by the positive. Note that the electron does not need to travel through the wire, it only needs to move a small distance.

In terms of current direction we still tend to think that current flows from positive to negative (because that's what we teach in schools), this was due to an historical mistake made by Benjamin Franklin who simply got it wrong.In reality it doesn't matter as long as you are consistant in any calculations.

The more current that is taken by the circuit, the faster the reaction has to take place in the battery and the quicker the battery will be depleted. Measuring the voltage at the terminals you will see this drop as more current is taken.

For calculation purposes we think of a battery having an 'internal resistance' It doesn't have a real resistor inside, it just has a physical limit as to how quickly it can replace the neutralised charge pairs.

Rechargeable batteries can have their chemical reaction reversed by sending a current into the battery. The energy provided is stored in chemical form.

Now, what is the current? Current is just flow of electrons.

Universally, we have assumed that the direction of current is equal to the flow of positive charges. Since, electrons are -vely charged. Thus, current flow in opposite direction to that of electrons.

Example: Now, let suppose we have 9V battery. For instance imagine electrons inside 9V battery, how they will move. Now assume positive terminal of battery as +9 and negative as 0. Thus, electrons are being attracted to +9 side from 0V side, this is what voltage is.

Now, you can easily answer your own Question.

Looking voltage in primitive term : Is a kind of repelling power ?

Circuit-physics involves magnetic fields and electric fields, the b-fields and the e-fields, corresponding to amperes and volts.

One thing that gets missed by many intro textbooks: voltage is "static electricity," and electric circuits are based on electrostatics.

Rub a balloon on your arm-hairs, and you're producing extreme voltage but at zero current. Scuffing on rugs and zapping the doorknob, that's a matter of 5,000V or so. A battery is a charge-pump, and it pumps charges by producing a static surface-charge and a voltage in a thin layer between a metal and a conductive solution. (The chemical reactions on a battery plate; they're much like millions of tiny balloons rubbing on millions of wool sweaters! But only producing a few volts, not tens of thousands.)

Given a closed circuit, a voltage can pump charges along, as when connecting a light bulb to a battery. Voltage causes current, and voltage acts much like "electric pressure," but it's not a pressure exactly, since pressures only act upon surfaces, while e-fields can act throughout the entire volume of a collection of charges. Also, voltage can exist in vacuum, while physical pressure certainly cannot! :)

Just to add to the above, the electron flow is actually quite slow, usually a few mm/s. That does confuse many people. What actually drives the circuit is the electric field induced when you close the circuit. That does move at the speed of light, C.

88
Where does electricity go after being used?
22
Do electrons actually flow when a voltage is applied?

22
Do electrons actually flow when a voltage is applied?
1
Relationship between Electrostatic Force and Circuit Layout / Dimensions
0
Maximum power point, why do you need to change voltage again? Isn't it simply \$ P = i^2 \cdot R \$?
5
Help understanding this pulsing LED circuit
3
Why doesn't electricty flow to earth ground when I connect my oscilloscope ground clip to a floating circuit?
1
Single conductor connecting two parts of a circuit vs two separate circuits
0
Do electrons still move in a wire in an open circuit?