Why does the Oscilloscope show a longer period of time than my code sets?

So I'm programming a TSL1401R-LF line scan camera module that reads in a a 1 X 128 array of pixels. I've run into a problem with the accuracy of the output. Basically the camera becomes less accurate as the delay times decrease. For debugging I hooked it up to an oscilloscope and monitored the SI and CLK pulses sent to the clock as well as the analog signals coming from it.

That's why I noticed the the duration of the CLK signal appeared to be over 300 microseconds long. This is strange because my code sets the duration to 170 microseconds. Since this is my first electrical project I'm not sure what to make of this so I'm hoping someone can take a look at my code and a screenshot of the oscilloscope and let me know if what I'm seeing is natural or not.

Here is the code:

Here is the screenshot 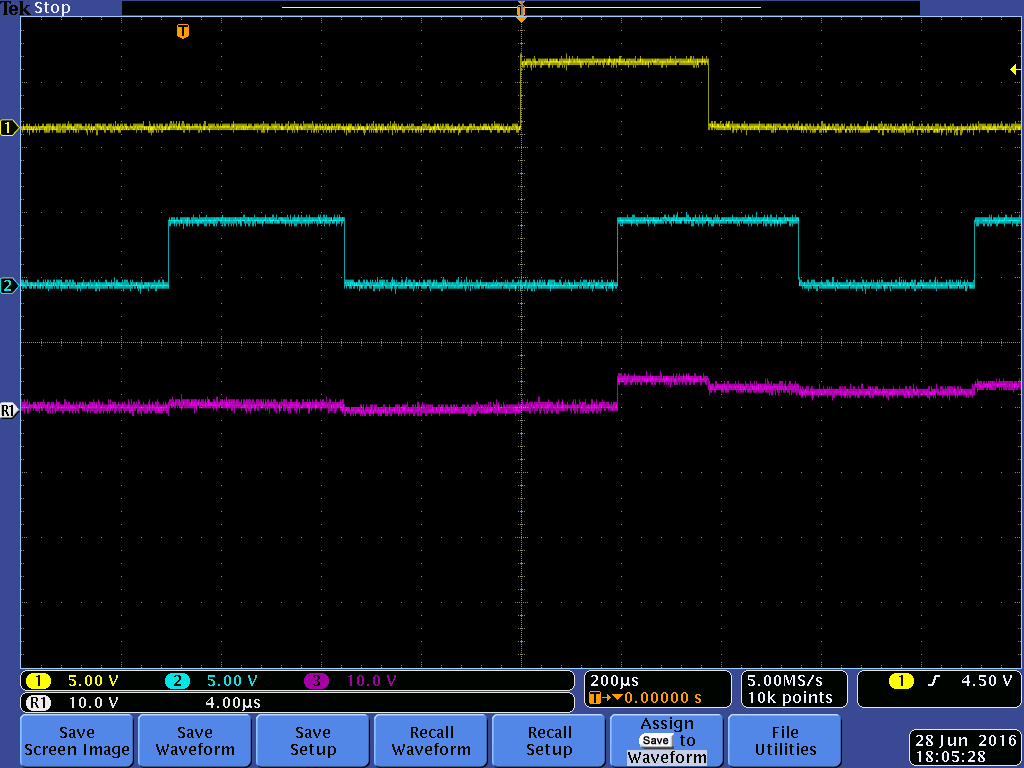 The yellow Line is the SI pulse, the light blue is the CLK pulse and the purple is the analog output.

It looks like the chip is running at a slower clock speed than it should be. If delayMicroseconds assumes a 16MHz clock and the chip is actually using it's 8MHz internal oscillator, for example, the pulses would double in length. You could check that:

The Arduino delayMicroseconds function is not a good way of making something happen every 85uS, and digitalWrite is not helping your case either. If you go digging into the definition of the two functions (which are provided by the Arduino project, not by Atmel, who make the actual microprocessor) you'll see that they are actually remarkably complicated. Now, the compiler will simplify them quite a lot, but even then you'll be left with a lot of operations, and those operations will lengthen the pulse.

You could rewrite the code to speed things up, but there is a better way. The AVR chip used in the Arduino has several timers on it. These run in parallel with the cpu which runs your code, and they can toggle pins or run short pieces of code at very precise intervals. The downside is that although the timers are a core feature of the AVR chips, they are rarely used in the Arduino world. So you'll have to go diving into some less user-friendly documentation to figure out how to use them.

Not the answer you're looking for? Browse other questions tagged arduino clock oscilloscope camera or ask your own question.

11
Why does my waveform start ahead of the trigger?
2
Why does my power supply show a signal on the oscilloscope when off?
3
Why does oscilloscope show large amplitude when I touch the probe?
0
op amp with single supply - non inverting circuit gain not being produced
1
Why does the accuracy of my camera drop when I start using no-ops as delays?
0
Does anyone on here know why a camera's accuracy would drop when you reduce the delay time after the pulses?
0
What should I expect the output of my line scanner to look like on an oscilloscope?
3
Logic Analyzer shows voltage change in analog but not digital
0
Oscilloscope -> Parallel port pins not sustaining high/low
0
cascading shift registers 595 vs 594