Why did my LED resistor burn while lighting four LEDs in series?

I have tried to create a circuit to switch a large 7-segment LED display (LDS-CD16RI) using a pair of MOSFETs, as follows: 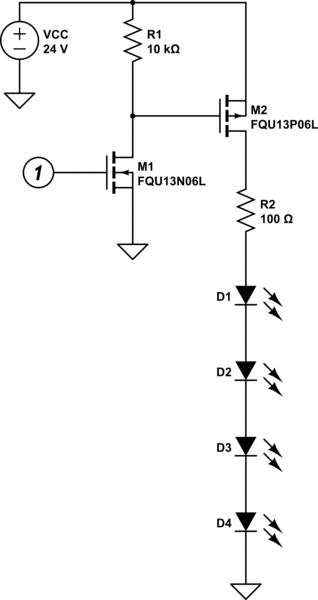 Here I am trying to use a 3.3V logic signal (illustrated as the circled 1) to switch the 24V to drive the LEDs. This circuit is repeated for each of the segments of the display.

The typical forward voltage of each of the LEDs (which are in series inside each segment of the display) is 6.8V, and their max steady forward current is 20mA, so I aimed for 10mA current through the LEDs. Since my supply voltage is only 24V I planned to actually drop about 5.75V across the LEDs to give me some headroom for the voltage dropped across M2 and R2.

0.01W seemed safely below the 0.25W limit of the through-hole resistors I used, so I proceeded with constructing and testing this circuit.

To cut a long story short: R2 burned up shortly after a segment was illuminated. This occurred for each of the separate instances of this circuit driving the various display segments, suggesting that it was a design error rather than a single component failure.

From my calculations and further analysis, I cannot yet understand why this occurred. To check my work, I re-constructed the circuit in a simulator which suggested that power from R2 would in fact be 6.84mW, which is a result I cannot explain but in any case one smaller than what I had calculated above.

I expect I have made an error somewhere in my calculations or my assumptions, but I have been unable to locate it. Assuming the problem is that the resistor is indeed dissipating too much power, can my circuit be adjusted to address this? Is R2 a red herring here and the problem exists elsewhere in my circuit? Is my approach itself flawed?

6.8 volts seems awfully high for a single LED. Are you sure that 6.8 is not the number for all four LEDs? That would make it 1.7 volts per LED, which is more reasonable for a red LED. And that would mean that you are currently pushing 172 milliamps, or almost 3 watts through your resistor.

If that is the case, you should lower your power supply to less than 20 volts (maybe 12 volts) to keep from destroying the gate of your MosFET (M2).

I see your problem. Your circuit shows how you're driving a single LED segment. (I presume you then have 7 of these circuits, one for each segment.) The datasheet shows 4 LEDs in series, covering the segment.

In fact you're lucky that the 0.25W resistor basically becomes a fuse under those conditions and burns out almost immediately. If it hadn't, putting 172mA through the display would burn that out pretty quickly, and a large 7-segment display is going to be a fair bit more expensive than a resistor. If you'd used a higher-powered resistor, you'd be wondering why the display briefly flashed very brightly indeed and then went black forever.

You got it wrong.

Forward voltage in the datasheet is for series of LEDs, not for individual LED.

Thus the current is .17A and power dissipated ~4W.

Not the answer you're looking for? Browse other questions tagged led resistors 7segmentdisplay or ask your own question.

2
Are these LEDs glowing due to leakage current? How to prevent it?
1
Driving two large 7-segment displays using Arduino and shift registers
1
Using a LS248 7-segment driver, but segments are dim. Can't figure out why
0
Problem with 7-segment display: dimly lit when off
0
Can this shift-register circuit be simplified?
0
Resistor for 20 LEDs in series
0
7 Segment Common Cathode LED Digit Display Circuit for Arduino
1
Using serial-input latches from Pi to drive 24V load (LEDs)
0
7-segment resistors
0
Addressable like 7-segments number display