What is the function of "Picture tube charger"?

There is a bizzare device called picture tube charger or CRT-Charger. Here I attach the some diagrams of it from a circuit-book. 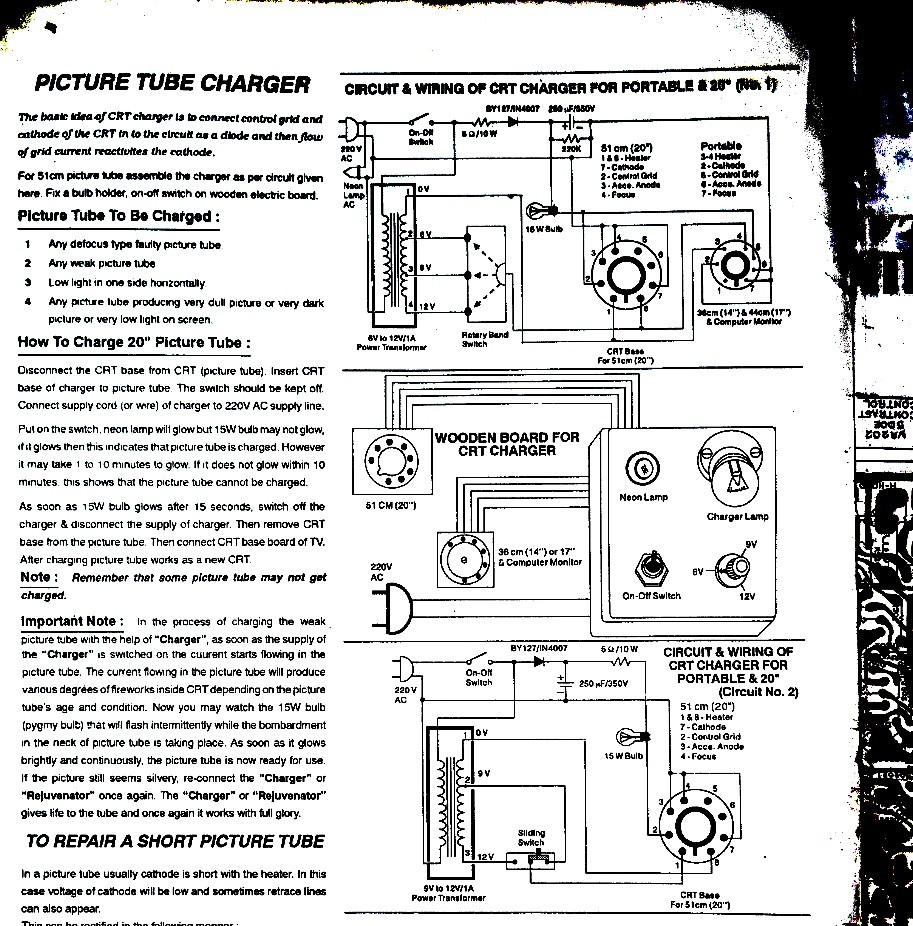 Now, what is its function? what changes it create inside the CRT?

such- as, Is it a method to reverse the metal-evaporation from CRT-electrodes? or is it a method to increase the electric conductance of the low-pressure-gas kept inside the CRT? or something else?

Also, What is the principle behind automatic turning-off of the larger-bulb and glowing-up the small-bulb at completion of the so-called rejuvenation process? (though in these circuit-diagrams there is no mention of any automatic timer-circuit, and as-if it is implying the picture-tube changes its electrical behavior at the end of that rejuvenation process)

I was thinking "just use google", but then I saw a comment suggesting that many people wouldn't even know what to look for...

When the tube is manufactured, the envelope is evacuated, then the tube is heated. The "getter" in the tube reacts with residual gas and off-gassing, and removes remaining contaminants from the system. This process is never perfect, and in old tubes wasn't very good.

So as the tube is used, contaminants react with the warm emitter surface (less so with the cooler collector or grid or screen surfaces, and it doesn't matter anyway)

It is sometimes possible to "rejuvinate" these tubes, by getting the emmitter hot enough to boil off the contamination. The only way to do that is get the heater very hot, much hotter than normal. But -- that's the other way tubes fail:

Another common kind of tube failure is when the heater burns out. If you are very lucky, you may be able to swing the filiment back into contact, as with a light bulb, but ... that trick never works.

And what kind of a circuit would you use to get the heater so hot? Not a normal radio circuit: a special piece of equipment, designed to run as much current through the heater as possible, while being careful not to overheat it and burn it out. A tube rejuvinator. Originally and often called a tube charger. Often made specifically for a specific tube, or a specific family of tubes.

CRT tubes are special, in that they were very expensive. If one was getting old, and the picture (or later, one color) was fading, you'd connect it to your Picture Tube Charger, and try to get a couple more years of life out of it.

A tube charger normally runs constant current. Better ones had an automatic timer (so it didn't depend on your finger). The one you have uses a light bulb as the current limiter: light bulbs have non-linear resistance and were often used a current regulators.

edit: On further examiniaton, it looks like the incadescent bulb is in the anode circuit, and is being used to indicate (and limit) anode current, not heater current. When the tube starts working (as a diode in this circuit?), you'll get some emitter/collector anode/cathode drain/source current. The fact that they claim it's safe for up to 10 minutes indicates that they are trying to over-heat fairly gently.

1
Solar charging using or not using a dummy (dump) load
4
What is the function of this cable surrounding the CRT of old televisions
23
How did old television screens with a light grey phosphor create the darker contrast parts of the display?
0
How were the phosphors applied to the inside glass tube of older colour CRTs?