Multimeter reading 0 and drawing too much from DC power supply

So I've got a circuit that requires both 5V and 3.3V so I bought a 5V 2A AC/DC converter from a store, which I will add resistors to later for the 3.3V. Before I connect it to my circuit, I wanted to verify that the DC output was correct, so I plugged it in, dialed my multimeter like so: 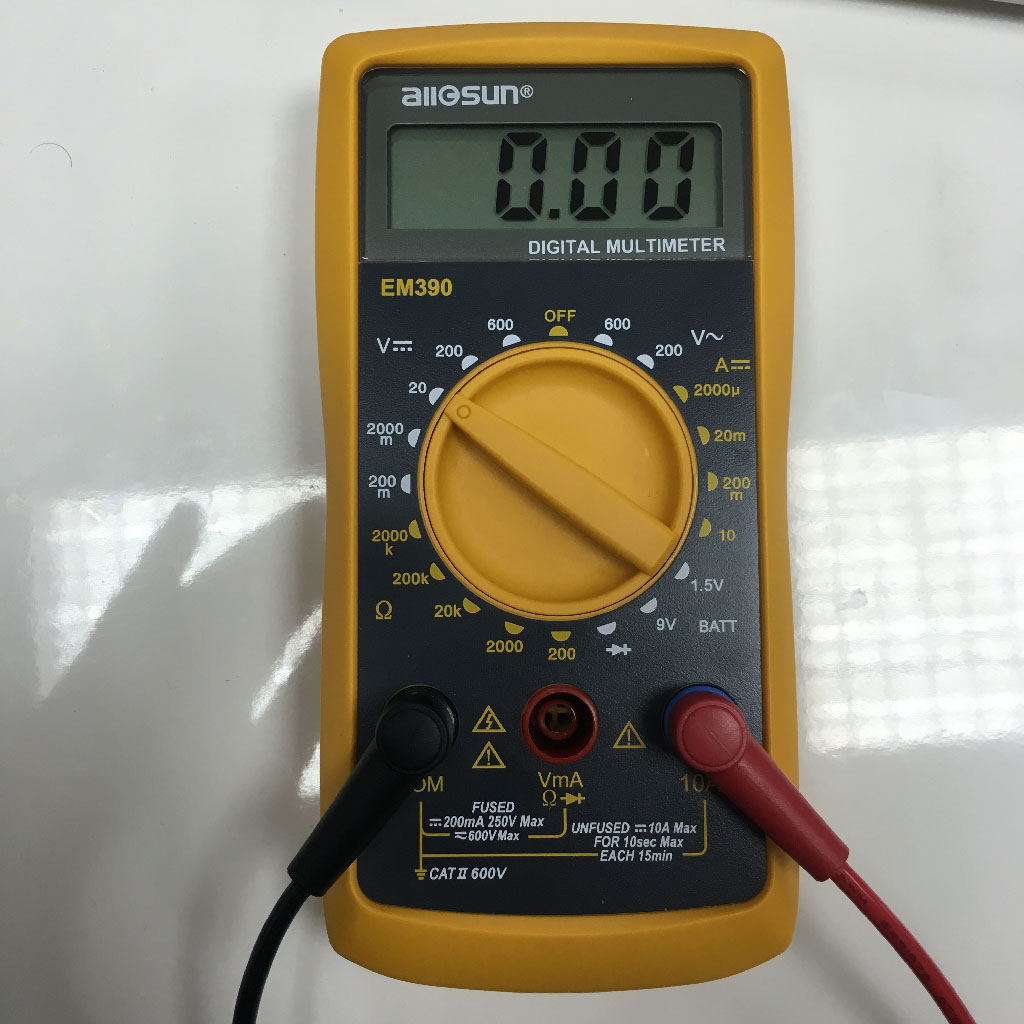 For 20V max DC voltage. Then I attach the common to one of the contacts on the power supply (shouldn't matter which because I'll either get a positive or negative voltage) and the 10A "hot" end to the other contact. When I make contact, the power supply's LED, which is on when plugged in and not connected, goes out and I get a 0 reading on the multimeter.

What is happening? Is my setup correct? Should I add be adding resistance anywhere? Is the multimeter pulling too many amps? Do I need a different multimeter? What is the best way for me to test my 5V 2A DC power supply?

You have your multimeter leads plugged into the amps socket. It will act like a short circuit.

If you are trying to measure voltage then plug the red lead into the red socket marked "VmA" (in the middle).

To help with the second part of your question:

I will add resistors to later for the 3.3V

Don't do that, if you want to convert the 5 V input from your PSU into 3.3 V. Attempting to do so causes all sorts of problems, as the 3.3 V "output" will then depend on the current being drawn, which will vary depending on what the 3.3 V circuitry is doing.

Instead you should use either a 3.3 V linear (e.g. LDO - low dropout) or buck (switch mode) regulator, connected to the 5 V supply, to produce a regulated 3.3 V supply for those components which require that lower voltage.

Linear regulators require simpler associated components (typically 2 capacitors for fixed-voltage types), tend to be cheaper, have relatively little ripple on the output, but produce more heat (especially as output current increases). Buck regulators are generally the opposite of those characteristics. Both types are available on pre-made PCB modules, if you don't want to build them yourself. There are several similar questions about choosing and using such modules on EE.SE.

Not the answer you're looking for? Browse other questions tagged power-supply dc mains multimeter ac-dc or ask your own question.

9
Why can't a multimeter measure its own current and voltage?
0
Basetech bt-153 issue
2
Understanding current readings from a multimeter
1
Charging battery using computer power supply?
3
BeagleBone Black - power supply sensitivity
2
What is the advantage of a switching over a linear power supply?
1
Why is this multimeter power supply short circuit when off
1
Powering LED strip and Raspberry Pi from a single 10A 5.5V power supply
0
Voltage drop if power draw is too quick: Does it happen naturally or regulated?
3
After power supply is turned off, voltage still exists and is slowly dropping over a minute + long period