How CRT allows use of ligh-guns or pens etc?

While reading about CRT on Wikipedia, an information (CRT Allows the use of light guns/pens; https://en.wikipedia.org/wiki/Cathode_ray_tube#Advantages_and_disadvantages) suddenly triggered a a vast lots of memories.

Around early 1990's when I was a toddler, in a local "mela" or fair each year, there was a stall for video games .

They had several big boxes (maybe CPUs), several tiny to large sized, portable monochrome televisions with a mesh of cables. They provided any 1 of 2 kinds of input devices, 1. a game-control with arrow-keys & fire-key etc; as-well, 2. a toy Gun-shaped device.

In the game, to destroy the enemy (a rocket, or an octopus, or a ghost etc), the tip of the toy-gun were almost-touched on that object on screen, and on pressing the trigger, the selected rocket were destroyed.

It was, specifically surprising to the kids, because that was a pre-touchscreen era. The television set, acted quite like a touchscreen.

Now I want to know, how that systems worked?

Which-one is acting as the sensor (of the particular place where the rocket was fired)? the toy-gun or the CRT? What is the mechanism to identify a particular spatial-position (of target-object such as rocket) out of many-other objects (other rockets)?

The CRT TV picture was generated by deflecting an electron beam fired from the back of the tube in a raster scan as shown in Figure 1. Two sawtooth oscillators control this: one for the vertical and one for the horizontal - the horizontal one running much faster than the vertical. For PAL used in Europe there are 625 lines (horizontal) refreshed at 25 frames/second (vertical). (It's a little more complex as the lines are interlaced to reduce flicker. The vertical scan runs at double the frequency alternately drawing the odd and even lines.) 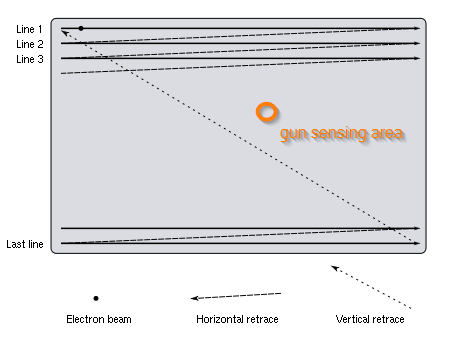 The electron beam excites the phosphor on the inside of the tube making a sudden step change in the brightness of the dot. This then decays until the next refresh. The persistence of the dot was a balance between keeping bright between refresh and "motion smear" if it was too slow.

The gun contains the required optics to view a small spot on the screen and a fast light sensor. Some analog logic is required to keep track of the vertical and horizontal dot position relative to the position of the on-screen "target" and match this with the step change in light level by the gun sensor. If the two coincide at the moment the trigger is pressed a "hit" is registered.

Note that this system could only work with bright targets as there would be no dot impulse on black or very dark areas of the screen.

I think @Passerby's answer is more accurate and obviously a much simpler method of working without the timing issues of my answer in the case of the gun. I predate video games. He obviously had a mis-spent youth - although it has paid back on this occasion. 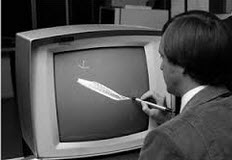 Figure 2. The cutting edge - once upon a time. This would be easier to date if we could see how wide his trousers flares were.

The method I have described is how the light pen worked - to the best of my recollection.

The quintessential example of a light gun is Duck Hunt with the NES Zapper.

When the trigger was pressed, the Nintendo would trigger a special frame at CRT refresh rates. The screen would draw a white square at the target, too fast for human vision to see, but slow enough that a brightness sensor (A simple Phototransistor) with a very narrow field of vision in the Zapper could tell the difference between Black (miss) and White (hit). Multiple targets have their own target frame (or slightly overlapping).

The Zapper is the sensor in both meaning of the word. It senses the trigger press, and it senses the screen brightness.

No it didn't because it would not work with your finger, it only works with the "gun".

The operation is quite simple, pictures on CRT screens are drawn by moving a "dot" which lights up, across the screen. Human eyes are too slow to notice this so we see only the complete picture.

The gun consists of a pipe and a fast light sensor. When you point it at a spot on the screen the sensor will give a signal when the "dot" passes by and light shines into the pipe and onto the sensor. Then the system "knows" where the gun is pointing as it got a signal from the gun when the "dot" was at a certain position.

Not the answer you're looking for? Browse other questions tagged sensor input crt or ask your own question.