I am trying to figure out the total energy released and discharge time in an ignition system like this. The switch is closed at time t=0, and there is a spark gap in the secondary coil. The values for the components are representative but may be altered in the future. I assume the transformer serves the role of an inductor in the main circuit?

To me this looks like an older generation spark generator which would be part of the ignition system of a car.
Switch SW1 would be the points in the distributor and XFMR1 the coil.

This type of device like the induction coil which would have a make and break device would produce a changing magnetic flux through the primary of the coil by making and breaking the circuit using switch SW1. 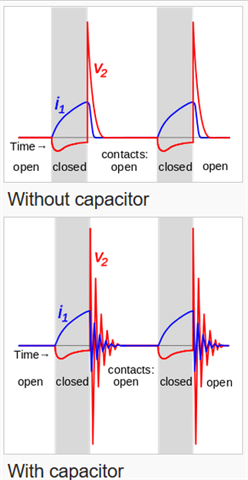 The resistor R2 in the output circuit of the coil is there to reduce RFI by dampening down the oscillations in that circuit and is usually incorporated in the spark plug as shown in the diagram below.

The inclusion of a capacitor makes this look like a capacitive discharge ignition circuit, but it is lacking the requisite 400V high voltage supply and the flyback diode used to make these things work.

I'm going to guesstimate the analysis for the total energy and hopefully point you in a direction if you want to do the full differential equations to get the discharge time. You should actually be able to plug this into LTSpice or something like that and simply measure the time.

Usually, capacitive discharge systems work by discharging a very high voltage capacitor (usually 0.5-2uF at 400V) from one side while it is tied in series to an ignition coil primary. This causes a large current spike to be forced through the inductor and thereby operates the ignition coil. The energy transferred will be limited to the energy stored in the capacitor (0.5*C*V^2). Losses will occur through the windings of the transformer, over the diodes, the switch, and other places. Remember that V is usually around 400V for these systems. Since this one has 12V, it looks like 72uJ is going to be the stored energy.

I don't believe this circuit is a capacitive discharge system because of the lack of an HV supply, the series resistor, and the location of the capacitor.

In this system, a spark is created by drawing current through the inductor (closing the switch) and opening the switch once sufficient energy is stored in the inductor. This creates a very high voltage spike whose energy is transferred over the ignition coil.

In this schematic, if we assume that the inductor has no resistance itself, the series 1K resistor will limit the current to 12mA. Ignition coils usually have a primary inductance of a few millihenries, so I'll assume 5mH. If you leave the switch closed long enough for the inductor to ramp up to the "full" 12mA, you will have a stored energy of 0.5*L*I^2=360nJ. When the switch is opened, this will manifest in a large voltage spike proportional to the speed at which the switch is opened (V=L*di/dt). This spike is usually around 450V when a spark plug is connected to the secondary and lasts for a few microseconds. The voltage and duration of the spike are dependent on the secondary load, and series primary load. Part of the energy (in fact, probably most of it in this case) will be dumped into the capacitor since there is no series resistor. The rest will spill over onto the secondary of the transformer. The actual equation for the energy (and also the discharge time on the secondary load) will be complicated because you don't specify a series resistance for the capacitor.

This circuit is also not a proper inductive discharge system because of the lack of a series resistor on the capacitor and the addition of the large value series resistor between the coil and the battery.

As a side note, usually a capacitor in parallel with the switch is part of a snubber to limit the rate at which the voltage rises on the coil (the di/dt). Certain types of switches (i.e. MOSFETs and IGBTs) can be triggered back on by a di/dt that is too high for the strength of the switch driver. A snubber is used to absorb some of the energy of the inductive spike and effectively limit the resulting di/dt seen by the switch.

Conclusion and a rough time analysis without sparkgap

Since you say that this circuit is meant to be operated by closing the switch, it would probably be easiest to analyze it like a capacitive discharge system. As stated before, your total energy is going to be like 72uJ. This won't be enough to strike an arc in a practical scenario.

To put together the DEs for this, you will need to calculate the voltage over time across the resistor on the secondary side given the initial energy of 72uJ. It will derive similarly to the derivation for the RC time constant of a capacitor, though you will use the charge alone and will need to finagle with the units to get everything to come out (I tried and it was taking too long).

Anyway, I put together a quick LTSpice simulation to get the time: 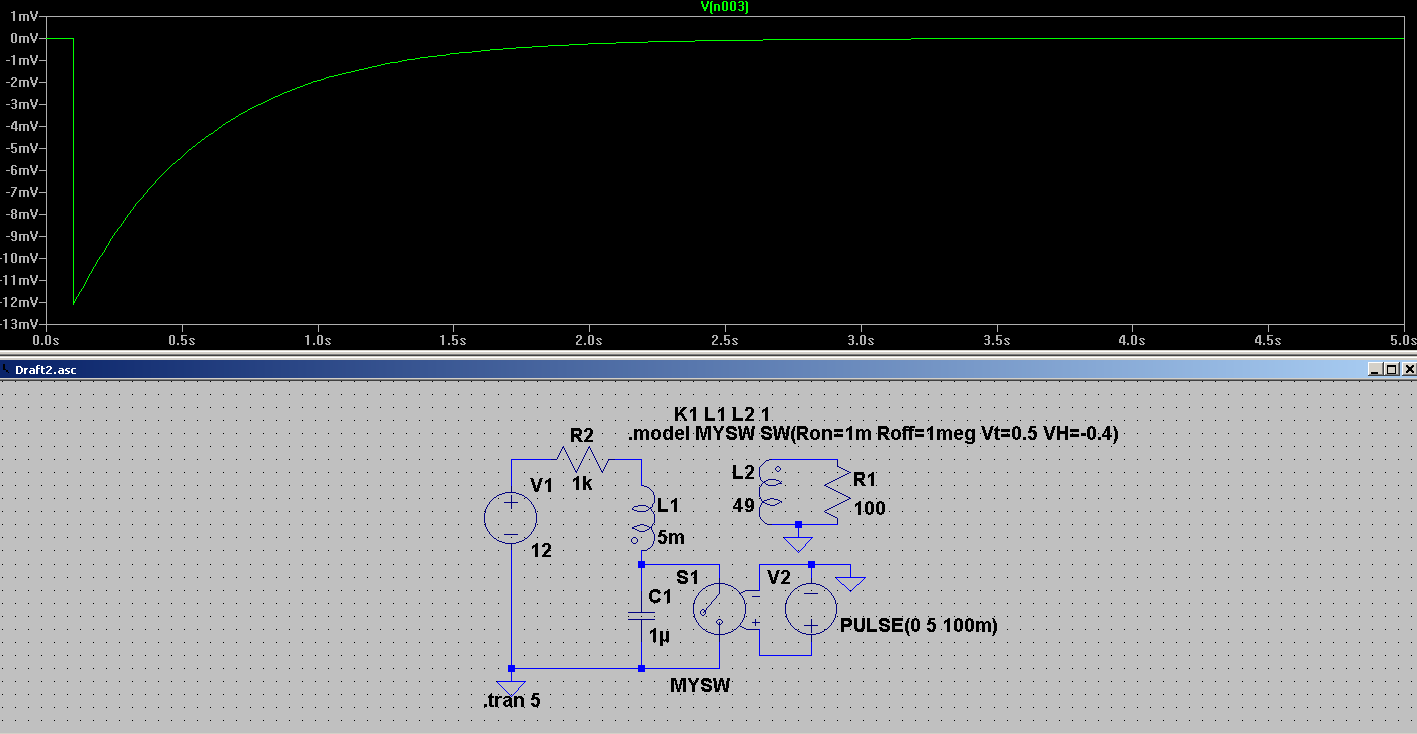 The voltage in the graph is the voltage over the resistor on the secondary side of K1 (the ignition coil). My inductor values I put in were from an ignition coil I used on a research project. As you can see, the discharge time is in the neighborhood of 3s or so, but will of course follow a nice exp curve since a charge is being dissipated through a resistor.

Analysis with a sparkgap would be fun. You would need to know the striking voltage of your gap and the sustaining voltage needed. I think these could be derived, but I'm not sure how. You would also need to figure out the resistance of your arc once its struck (and it falls as time goes on because of the ionization of air or something like that...it's got effectively negative resistance). Your voltage graph across the gap would look like a large spike, peaking at your striking voltage, then a sudden fall down to your sustaining voltage which would continue for a time before suddenly cutting off to 0V.

3
Thevenin analysis
0
How to treat the DC in calculate the time constant in RCL circuit having DC voltage source?
2
DC Circuit problem, an idea to solve this circuit?
0
First order RL circuit analysis problem
0
UPDATED:How to do Band Pass Filter Analysis for the current circuit
0
Analysis of an Armstrong oscillator circuit
0
How to find voltage across resistors in RC Circuit with 2 voltage sources?
0
How to find the voltage of a capacitor in a Op-amp + RC network?
0
The charging time of capacitor