What is this style of button / pad called? How can I us them in my own projects?

I really want to make some custom MIDI controllers. I've gone through the exercise of making a microcontroller talk USB to my PC and breadboarded some button circuits on perfboard. I'd like to step it up to the next level though and use "real" buttons and pads. Problem is, I don't know how to learn what to do next.

I've attached a picture below of the style of pad I'd like to use. I thought this would be a "membrane button" but that isn't really what I want. Can you provide some guidance on what that style of button is and how I can use them in my own project? 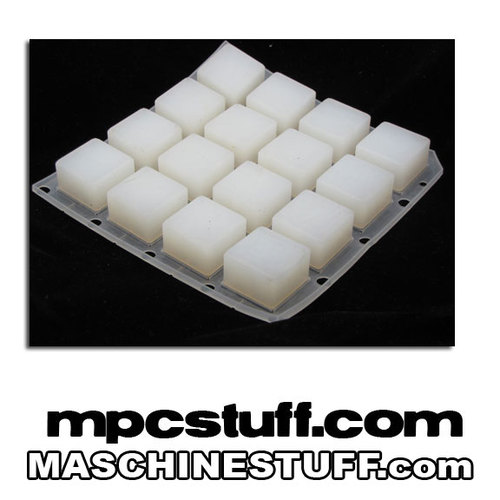 Dome-switch keyboards are a hybrid of flat-panel membrane and mechanical-switch keyboards. They bring two circuit board traces together under a rubber or silicone keypad using either metal "dome" switches or polyurethane formed domes. The metal dome switches are formed pieces of stainless steel that, when compressed, give the user a crisp, positive tactile feedback. These metal types of dome switches are very common, are usually reliable to over 5 million cycles, and can be plated in either nickel, silver or gold. The rubber dome switches, most commonly referred to as polydomes, are formed polyurethane domes where the inside bubble is coated in graphite. While polydomes are typically cheaper than metal domes, they lack the crisp snap of the metal domes, and usually have a lower life specification. Polydomes are considered very quiet, but purists tend to find them "mushy" because the collapsing dome does not provide as much positive response as metal domes. For either metal or polydomes, when a key is pressed, it collapses the dome, which connects the two circuit traces and completes the connection to enter the character. The pattern on the PC board is often gold-plated.

Keep in mind that instead of custom poly domes or metal domes, you could use the rubber part over mechanical switches.

That is a silicone rubber keypad. They are usually custom-made, but SparkFun sells 2×2 arrays similar to those in that picture along with the other parts required to form an entire assembly.

Sparkfun calls them "silicon rubber button pad". Adafruit calls them: "elastomer keypad". They were also available from Livid Instruments, but most of their products seem to have disappeared.

Not the answer you're looking for? Browse other questions tagged identification button or ask your own question.

1
Rewiring KVM Buttons
3
What's this button called
6
How to get 1-button-press to output 1-“active”-tick according to a clock
0
Self-made Arduino pushbutton bank not working
1
How to programatically simulate a click on a capacitance-sensitive button?
1
Help identifying this chip (EEPROM?)
4
How does this button work without any circuit closing device?
1
What solution would be a low power option to signal a computer with button presses?
1
Power button behaving as OFF-(ON) momentary switch rather than latching- Troubleshooting
0
What kind of 16-pin connector is this?