What will happen if the output from a NOT-gate injected- BACK to its OWN input? 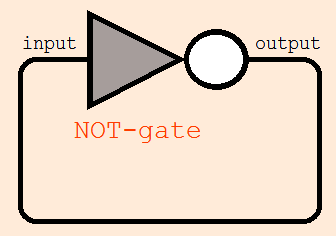 Now, what will-be happen in case of the real hardware called a NOT gate?

I ASSUME the possibilities;

Will something happen within-these assumptions?

PS. I'm thinking about this-problem from my schooldays, but since yet I do-not know, how to assemble a not-gate in a circuit, from-where they could be bought, etc; I yet could-not test it experimentally.

What happens is usually cases 3. or 5.

74HC14: When a Schmitt triggered gate is used oscillation will almost certainly occur.
Assume Vin-out initially = low = 0.
When input = 0 output will transition to 1.
Time to do this is propagation delay of gate (usually ns to us depending on type.
When output starts to go high the rate of change will be affected by the load.
Here the load is the gate input capacitance + any stray wiring capacitance driven via the gate output resistance and any wiring resistance.
Cin_gate is in data sheet and may be in the order of 10 pF (varies with family).
On a PCB wiring capacitance will be low.
In this situation series inductance may also have a small effect but usually so small as to be ignorable. Output resistance varies widely with gate type.
Very approximately Rout_effective = V/I = Vout/Iout_max.
eg if dd = 5V, Iout max = 20 mA then Rout ~~~= 5/.020 = 250 Ohms. This is very dynamic but gives an idea.

When Vout = 1 has driven Cin to a high level via Rseries + Rout then the gate will see VIn = 1 and start to switch to Vo = 0. After a propagation delay the output starts to fall.
And so it continues.

74HC04: When a non Schmitt triggered gate is used oscillation MAY occur by the mechanism above but it is more likely that the gate will settle into a linear mode with Vin-Vout at about half supply.
Internal transistor-switch-pairs which are intended to be eother high or low output most of the time may be held in an intermediate state. This may lead to high current draw and may lead to IC destruction, but also may not.

Note: The Schmitt gate will oscillate at a lower frequency both due to longer propagation delay and because the hi-lo thresholds are defined and separated by the hysteresis voltage - so Cin takes very slightly longer to charge. The non Schmitt gate will probably oscillate higher if it does oscillate but is more likely to go into a linear mode - possibly with low amplitude oscillation superimposed.

Mario has shown the conceptual diagram of a simple inverter such as a 74C04. These were amongst the first CMOS gates - but the low output drive was 'annoying' and buffered gates with more drive soon arrived. To obtain the extra current drive they have a high current output stage separate from the input stage. As they both invert the overall result is NOT an inverter so they add a 3rd inverting stage to get overall inversion. The end result is "an inverter" externally and a black box of unknown happenstance when driven semi analog-ly.

For the 74HC04 the diagram below is as shown in the
Fairchild and
TI and the
NXP datasheets
BUT
ON-Semi,
just to be different make the 2nd stage a buffer with an inverting input. The result is the same, logic wise. So, overall, no guarantee what will happen when allowed to function in a semi-analog fashion.

Note that this is just for ONE CMOS based version - there are many other CMOS versions.

CMOS is the most commonly used but original TTL, LSTTL, STTL. ECL and more.

what you are describing is called a Ring oscillator

Your output will oscilate with a certain frequency depending of the gate delay of your NOT gate.

A perfect NOT Gate would oscillate with an infinite high frequency.

Since such a perfect device does not exist, your frequency will be

where t is the gate delay of the NOT gate you use.

Looking at the transistor schematic it can be seen that the resulting circuit consists of two transistors that have their gates connected to their drains. This so called "diode-connected" transistor acts like a non-linear resistor.

Basically you end up with a voltage divider and depending on the actual transistor dimensions you will get a voltage the should be around half the supply voltage.

A single inverter will not oscillate as it does not have sufficient phase shift. For an oscillator you would need at least three inverters in series.

This may be technology dependent, but at least a TTL NOT gate (bipolar transistors) can often be viewed as just a high gain inverting amplifier.

By connecting input to the output, you create the strong negative feedback, so the amplifier will stabilize somewhere between logical 0 and logical 1.

If you connect input to output through a resistor, it may be possible to fed in and amplify external analog signal.

The internal elements of a single gate usually do not have enough parasitic capacity (so delay) to produce oscillations if connected this way. However a ring of 3, 5 or more gates may have enough delay to generate a high frequency signal instead of going into stable state.

I have seen such "digital analog" solutions in voltage stabilizers (very elegant - a digital chip stabilizes 5V for itself) and generators (a chain of 3 gates works as oscillator, somewhere about 8 MHz) in the old Russian literature. These diagrams referenced the K155 series chips (I think, something like old series of 7400 should be the Western analog).

Not a new-answer, but as simple-way understanding that "point- 5." (that was explaind by other users), with a simple mechanical analogy. 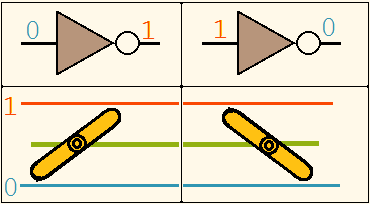 A not-gate could be compared with a lever, with a fixed, resting fulcrum at the centre of the lever. (Such as in a scissors).

In this mechanical-model, there is no simple-way to join the input with output, so we're going to a slight indirect-way. ... 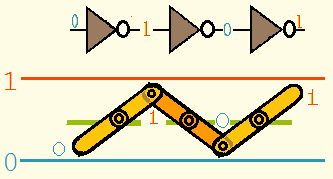 Now, since this-combination would act as a single not gate, and its output could interact with its input, like this. 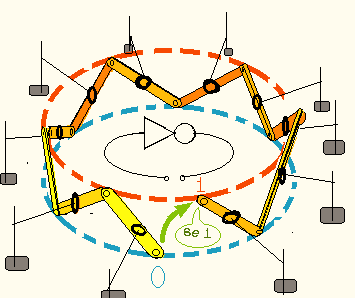 The stands drawn just to mean, the fulcrums are kept fixed at definite place, and the junction of 2 separate levers (= separate not gates) can move up or down

So, if We could Join the start and end (and could give the proper system to tolerate excess pressure in-between 2 neighboring levers)...

In this last-image, the left-image is a single- lever, represented just-like the world-s map drawn on 2d-page, with a bit of Alaska aside the East end of Russia, and a bit of Russia at the West of Alaska.

In the last-image, the right-image, shows, the flat, horizontal position, with 0.5 value.

A regular (not schmitt trigger) not gate can essentially be viewed as a type of inverting amplifier that is normally operated in saturation. By connecting the output to the input we apply negative feedback to this amplifier.

The results of this depend on the frequency response. A single-stage not gate will have a first order response and will stabalise at a level somewhere between the two power rails.

A three stage ("buffered") not gate will have a third order response. At frequencies past the second break frequency this will cause a phase shift of about 180 degrees turning negative feedback into positive feedback. If the gate still has gain at those frequencies then you will have an oscilator.

Every amplifier acts as a lowpass filter. In general a single stage amplifier has a first-order response.

This approximation is not perfect, in reality there is a more gentle transition of magnitude and phase in the area arround each break frequency but it's good enough for our purposes.

When we put three amplifiers each with a first order response in sequence we end up with a system that has a third order response.

It uses humour in the form of the implementation of a very old joke - and happens to deal with inversion and oscillation in a manner that is analogous to the inverter in this question.

Newcomer Ben posted a link to something that was thought irrelevant by some.
It's actually apposite and almost useful and also somewhat amusing.
Always confused reported the site having firewall issues - my system, which is (notionally) secure, did not 'complain' when I accessed the site.

This link that Ben supplied is to a 40 second video showing a "scientist" experimenting with dropping buttered toast and a cat and noting how they land. What he does next matches a standard joke. In the background his Igor like assistant is hard at work. Toast, cat, some duct tape and Igor's apparatus produce something of relevance to this question. It involves inversion and oscillation and (arguably feedback). Plus a smidgeon of humour.

I like the ~= 20mm toast drop experiment - and the unlikely outcome.
That about approximates the hard short in the question - and perhaps the outcome.

In addition, Ben noted " ... and it produces unlimited power." .
That makes sense in the toast + cat context but is not overly relevant to this question.

Not the answer you're looking for? Browse other questions tagged digital-logic logic-gates boolean-algebra or ask your own question.

0
When untied inputs are necessary, what is the technology to use for an OR gate?
6
How to build a 3-input NAND gate from 2-input NAND gates or a 3-input NOR gate from 2-input NOR gate?
0
BCD code Detector
0
Logism shows output as X, even though the gate is connected
0
Connecting logic gate input pin with pull up resistor to another driver input pin doesn't keep the voltage
0
Is it possible to build an AND gate from a NOT gate?
0
feeding OR gate output to its own input