I was reading the specs. of an electronic module used in process-safety applications & came across this note:

Self-Checking (Circuitry): a circuit with the capability to electronically verify that all of its own critical circuit components, along with their redundant backups, are operating properly. Banner safety light screen systems and safety modules are selfchecking.

Edit: Here is a link to the actual device, a "Banner Muting Module ": http://info.bannerengineering.com/cs/groups/public/documents/literature/116390.pdf

A breif description of this device's function:

One of my frustrations as a working electrical engineer is the lack of information on the internal workings of devices such as that you have linked. When the equipment was all relay based the manufacturers tended to give more information. A look at one of these may help to understand the concepts of redundancy and self-monitoring. 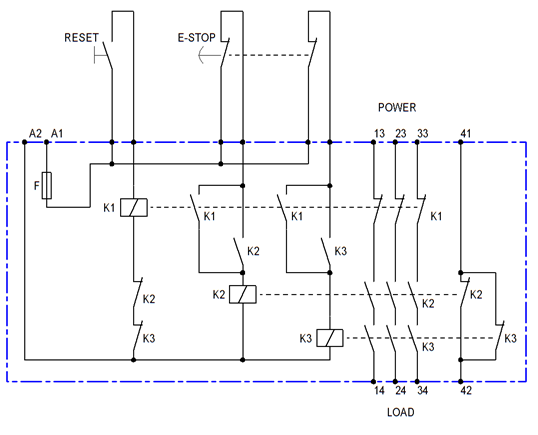 These relays are self-monitoring for a single failure. e.g., let's examine what happens if a K2's contact on line 33-34 welds during opening.

The relay also protects against shorts on the e-stop wiring:

Terminals 41 and 42 can be used as fault indication contacts.

This should be enough information to give some understanding of the inner workings of the safety relay.

The fundamental problem with electronic safety is that semiconductors don't have a predictable failure mode. They can fail open or short-circuit. Solutions have been redundant processing with voting or "crowbar" to blow a fuse, AC coupling through all the stages to ensure that a DC situation caused by a failure doesn't get through, etc., and various other schemes (that I would be interested to learn about).

Figure 2. (a) An unsafe system could latch on if Q1 fails short circuit. (b) A safety system might use an AC-coupled signal to generate AC to power the safety-rated relay (non-weld contacts, etc.).

It should be fairly clear that Figure 2b provides a higher level of safety than 2a.

To improve safety further a dual relay system could be employed with monitoring function as in Figure 1.

Figure 3. Circuit 2b modified to provide a DC safety output.

Figure 3 shows how to provide a safety DC output by leaving out the safety relay. Note that in this case it does matter if XFMR1 fails short-circuit primary to secondary. Special precautions would have to be taken in design and manufacture of the transformer - split bobbins, for example - to protect against this.

Not the answer you're looking for? Browse other questions tagged circuit-analysis safety circuit-design or ask your own question.

1
Conductivity of water, and risk of shock? (fact checking)
1
Checking my understanding of "branch in parallel current" warning
0
Laser alarm circuit
0
Feedback requested for my circuit
0
Definition for self-commutated switches
1
Circuit transformation explanation
0
HF upconverter circuit question
0
Checking if a device is safe to use
0
Self holding circuit - Looking for improvements