How to reduce a pulse voltage maintaining a high impedance?

The problem is that I have to reduce the tension keeping the point of mesure with a very high impedance in order to do not perturb my test circuit.

I have 2 option in mind but I am not sure if they will be work: -use a transistor (60V is very high for the base of a transistor, think) -use Current Transducer(limited in bandwidth and my pulse is to short) Maybe someone can have an better ideia . Thank you in advance =)

The problem you have here is very similar to one that an oscilloscope designer has to deal with - you need to interface a high voltage to a low voltage circuit while minimizing the load to the source and also maintaining the frequency response so that short pulses are not distorted.

The example I show below is very similar to a passive scope probe and has an input impedance of 10Megohms and will attenuate both low frequencies and high frequencies by the same amount. In this case by a factor of 10. Your 60V pulse will appear as a 6V pulse at the output.

The input of your circuit should be high enough input impedance so it does not load the 1Mohm output resistance of the attenuator.

You can change the resistor and capacitor values to meet your requirements - the ratio of the capacitors and resistors should be the same (in this case 9:1 to give an attenuation of 10).

The lower capacitor should be reduced by the value of the input capacitance of your circuit - if for example it has 5pF capacitance, the 100pF cap should be reduced to 95pF. In scopes one o the capacitors is made variable to adjust the circuit so the attenuation is the same at high-frequencies and low frequencies. This "compensation" is adjusted while observing a signal that has both high and low frequency components, typically a square wave at about 1kHz. 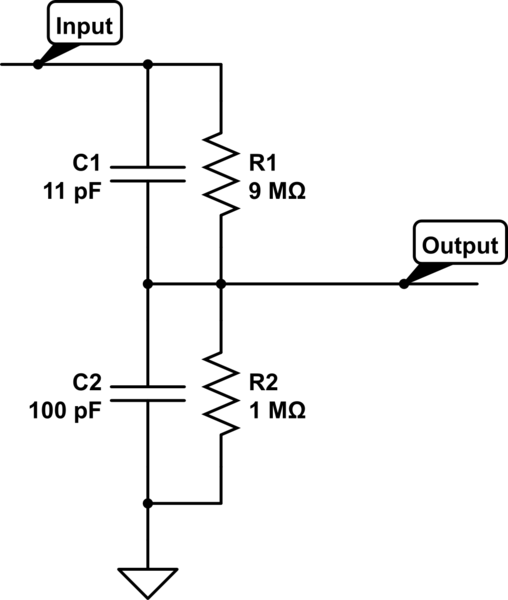 It seems you have a circuit that relies on a turned-on FET to establish a current in an inductor, then the FET turns off, interrupting the current and generating a 60V short duration pulse which is applied to your "test circuit". There are many ways of reducing the pulse voltage in this circuit. The essence of this circuit is that the high voltage pulse generation relies on V=L* di/dt.

Not the answer you're looking for? Browse other questions tagged bandwidth high-speed high-impedance monostable varistor or ask your own question.

3
How to build an arbitrary (one-shot) pulse generator?
-1
How to make sure that my compensated attenuator would work for certain pulse widths?