AC signal and ground plane with another trace passing between - is this bad?

In learning about reducing a circuit's EMI emissions, I've learned the importance of a ground plane, in that it allows the current-return for an AC signal in an adjacent layer to flow directly under that signal's trace, due to that return-path having the lowest inductance due to the smallest loop area, which also consequently reduces EMI.

What I'm now wondering is, what if something gets in between the two layers in question? Particularly, what if I have a power plane or power traces in between my signal trace and the ground plane which allows its current-return?

I've learned that the return current may in fact (confusingly) hop between ground and power planes by any decoupling capacitors along the way. See here. This doesn't sound quite ideal, so I'm considering not having a power plane at all, and instead simply running power traces where I need them. However, I'm wondering whether anything bad will happen if I run a power trace on a layer between an AC signal and its return path. Consider this example, crudely depicted: 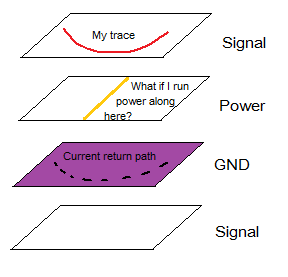 Firstly, will the presence of the (yellow) power line disrupt the depicted current return path?

And secondly, perhaps more worryingly, the yellow power trace is travelling directly through the "loop" formed between my trace (red) and its current return path on the GND layer, presumably then being subjected to the resulting field (electro-magnetic?) that occurs within this loop. Will that field then induce extra AC currents in the power trace?

Or is there a better way to route power - should I route it on the surface layers only, and have the inner layers as GND only?

For boards with lots of high frequency routing requirements the problem is solved by using more layers and assign more of them to be ground planes. For example a 6 layer board may use a stackup like this:

With such scheme the spacing between layers 1-2, 2-3 and 5-6 is selected so that the trace impedance to the reference ground plane can be controlled according to requirements. For stackup symmetry the 4-5 spacing is often made equal to the 2-3 spacing. The 3-4 spacing is made at least three or more times larger than the other spacings and becomes the predominant core of the finished board and is typically adjusted to arrive at the overall desired board thickness.

Most board manufacturing shops can customize the layer spacing to suit the needs calculated for a given board layout design. However since many readers here are engineers dealing with low volume board manufacturing or hobbyists looking for lowest cost it becomes necessary to ask the prototype PCB shop what standard stackups that they have BEFORE you start your layout design. You then use those numbers when calculating the trace widths to achieve the required trace impedance to the reference planes. Be aware that not all of the prototype shops use the same layer stackup so be aware that a trace impedance controlled design for one shop may not work properly if the production is moved to another shop that uses different numbers in their default stackup.

When using a particular stackup design it is a really good idea to include a fabrication drawing with your board artwork collateral that explicitly calls out the stackup spacings. Also if you are in the low volume camp and are using one of the various prototype or batch PCB services try to avoid shops that ignore your fabrication drawing. A decent shop will look at and consider your drawing and give feedback if they cannot provide your requirements from their standard stackup selections.

Not the answer you're looking for? Browse other questions tagged pcb emc routing ground-plane stack-up or ask your own question.

1
Stack up question...return current when signal layers sandwitched between planes
8
50MHz SPI PCB routing, use vias or resistors?
3
PCB ground plane separation between power and analog sections of board
9
Optimize signal return path with decoupling capacitors in a two layer board
4
Dealing with splits in my ground plane
0
Using neighboring traces for PCB return current
1
2 ground planes vs ground and power plane for 4-layer pcb with many power rails
1
Trace impedance for two signal layers between ground planes
0
EMI concern about the length of return traces