I have this Chinese Portable Rechargeable Mp3 player.

It has a two pin plug connector behind that is used to recharge it and some generic rechargeable non removable battery inside it.

It has the following connecting points on the top:

Whenever I play it with the plug connected to wall outlet, it has mains current flowing through the line out and speaker out. When I insert one end of the 3.5mm pin in the speaker out, I get full 220 volts shock in the other 3.5mm male pin end.

I tried doing this with the other line in port too, even that is releasing 220 volt current. This happens only when it is plugged in for charging and used. It does not happen when unplugged and played.

I am uploading few pics. 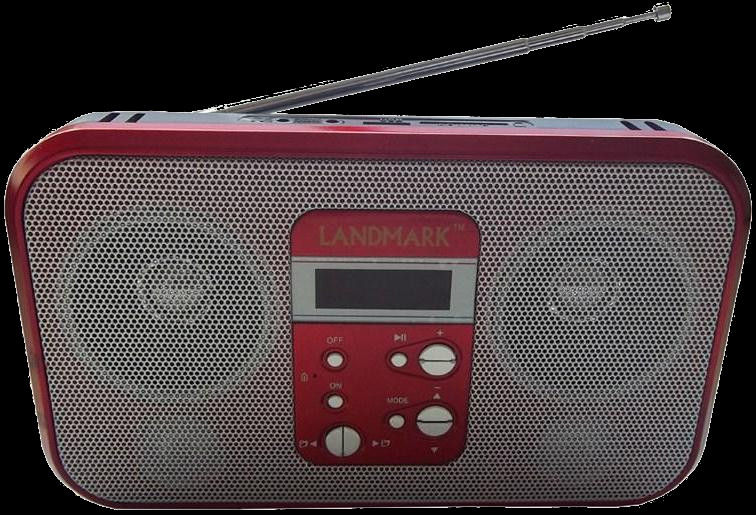 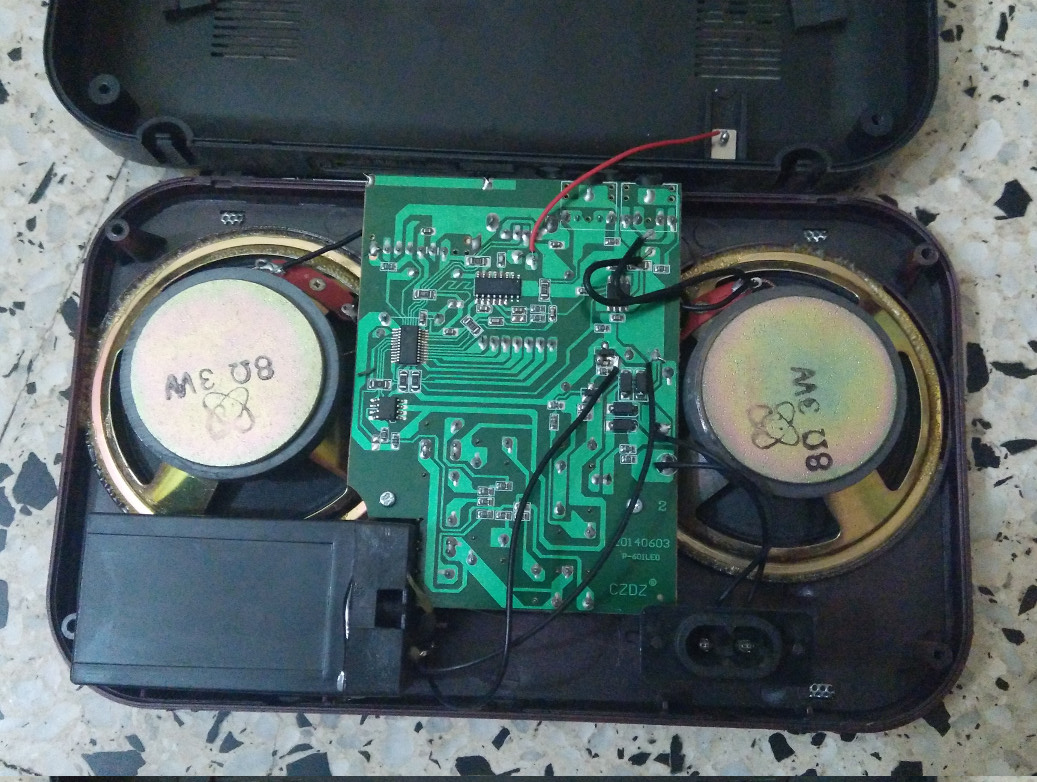 The red wire is for the antenna

I want to correct this design flaw. I want to add ground to this device. (am I right with my decision?). where should I solder a third wire on the circuit board for ground?

RM: IT IS ALMOST CERTAIN THAT THE RADIO IS "DESIGNED" TO BE CHARGED FROM A LOW VOLTAGE AC SUPPLY AND NOT FROM MAINS.

While it is not 100% certain what all the circuitry present is it seems that the diode bridge that converts AC input to DC is connected directly to the battery. Even a low voltage power source would damage most batteries if used this way. Connecting AC mains is liable to damage the device, the user and the battery. 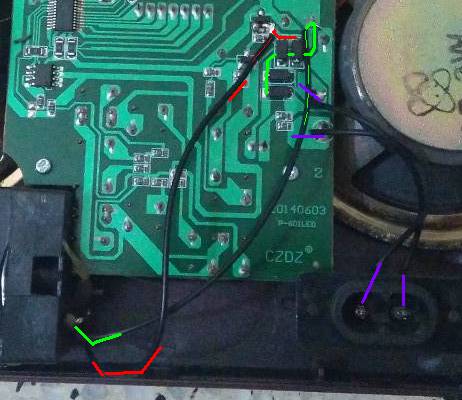 There is no way to fix this. Look at the picture: The mains input goes onto the PCB without any means of isolation. There is no transformer, and there doesn't even appear to be any cheapo alternative that might, probably, be acceptable - like two safety rated capacitors that might allow charging the batteries while maintaining isolation. Those capacitors would have to be very small in value because otherwise, they would allow a significant (read: dangerous) current to earth.

If you were to introduce an earth connection, it would, at best, cause your fuse to blow. At worst, the earth current would set stuff on fire.

Having no earth wire, it would have to be a class II device. This means that the entire circuit must be isolated to the user in a proper (double/reinforced) way. This is not happening here (antenna, battery compartment may be accessed, pushbuttons, headphone outlet, speakers, ... pretty much anything on this f-iretr-ucking piece of lethal junk.

Also, there is no way the two little black wires coming from the input connector are rated for mains voltage levels. They may cause a short between the two input contacts, causing a fire.

This device is a death trap, and it has taken the idea of making stuff cheap way, way, way too far. Return it to the dealers. Tell them you're serious about putting them out of business if they don't stop selling such warez, immediately.

This thing cannot be fixed.

Here's why: There seems to be no isolation between mains side and most part of the circuitry. If you try to earth something in the circuitry you probably will produce a short circuit. Most likely the device will let out much of the blue smoke then. If you are unlucky it will wait until you leave and incinerate your house.

If you are lucky your RCD and/or circuit breaker / fuse will blow.

A missing isolation cannot be fixed by trying to pull the potential of the mispowered parts of circuit to earth, because the connection to the AC mains has to be severed first. The analogy to the broken roof is not bad but I think it fits better if you try to put a garden hose into a hole in a hydro dam to redirect the water shooting out.

In fact: despite your tries to fix this thing it will keep violating any electricity code of any country and regulatory body of the world. It is in fact by its very design a criminal act. Mains voltage must be separated by isolation from touchable conductive parts. This cannot be implementated later on.

You should take measures that this thing leaves the surface of the earth without being plugged into any outlet again. I recommend removing the two prong mains receptable before throwing it away.

From the picture you uploaded it's clear that there's no insulation whatsoever between mains voltage and the rest of the player. You shouldn't use this thing when connected to mains, especially with 3.5 jack earbuds (220V applied to your head is insta-death). Running it on battery may be OK, but every time you charge it you risk getting shocked, which may also be fatal (getting a shock while touching some grounded appliances in your house is all it takes to make the shock fatal).

There is no way to fix this thing with grounding, as any contact with ground will create a short circuit and burn the player down. The only practical way to go about it would be to return it to the seller and get your money back.

Not the answer you're looking for? Browse other questions tagged ground safety mains or ask your own question.

27
Why is this power adapter transformerless?
5
What should my resistor wattage be to run a LED on 240VAC?