These 105ESM components appear to be capacitors. What are they, and which datasheet may I refer to?

I received a mixed-bag of various components from a friend and while I can identify the majority of them, there were a few of these inside. They appear to be small ceramic capacitors with a resin package measuring 6mmx5mm. The package is marked 105 ESM on one side, and 50(V|U) ACW on the other.

I found this page which seems to indicate that they may be a 1.0 micro-farad capacitor.

Here are macro images of each side of the package. The images may be clicked to view the full size: 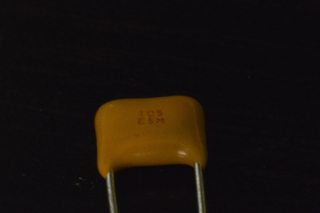 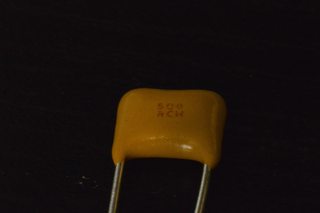 Thank you in advance for any help!

As stated by @Sparky256, they are 1uF/50V caps. Unless you get lucky and happen across caps that have a datasheet and look exactly the same, you probably won't get a datasheet (and even with caps that look exactly the same, I wouldn't be 100% certain that they are the same). It's possible that the M indicates a +/- 20% tolerance (BTW, a +/- 0.5% tolerance would be incredibly accurate, I don't think there's even a standard letter for that. Unlikely to say the least).

My point is, for your purposes, 1uF +/- 20% should be fine. If any of the following are true, you have a much more demanding circuit that requires special component selection (in which case you should buy something with a datasheet):

Sorry for the wall of parenthetical statements, but hopefully that clarifies things a bit.

Not the answer you're looking for? Browse other questions tagged capacitor components identification or ask your own question.