Using a large resistor instead of a flyback diode

In a video lecture a professor is explaining how to prevent an electric arc caused by the switching operation in an RL circuit. Here is the section (at around 18:26) where he explains it: https://youtu.be/FYDLG_A2P1I?t=1106

I know that a flyback diode is used for this purpose: 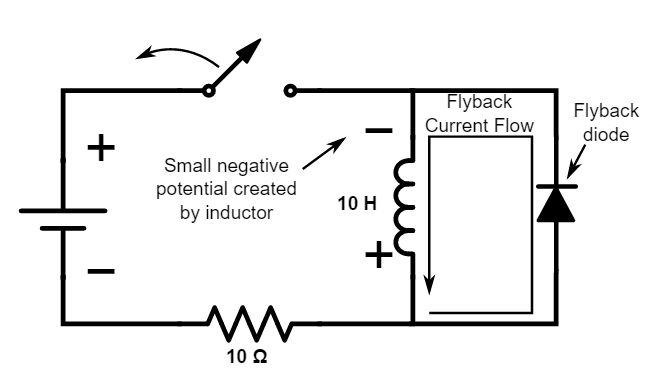 ... yet in his example he uses a very large resistor to create a path for the reverse current.

You need to be aware that the professor in the video is skipping over a few things. Note that at about 22 minutes, he writes the equation for the current through the resistor $$i = I_0 e^{\frac{R}{L}t}$$ but conveniently fails to evaluate $$ I_0= iR $$ In other words, for his proposed 10,000 ohm resistor, a 1 amp current will provide a 10 kV voltage spike.

Using a resistor instead of a diode is one of those entertaining tradeoffs. A diode will limit the switch voltage to only a bit over the source voltage. This is extremely useful when the switch is a solid-state device such as a MOSFET which absolutely cannot handle kV spikes. On the other hand, the voltage limit restricts dI/dt, so it takes a long time for the diode to bleed off the current. A resistor will allow much higher pulse voltages, but they will typically be much shorter. So:

1-) If a very large resistor is used, wouldn't it be a problem if a continuous switching is very fast comparing to LR time constant?

Yup. You don't do it with switching regulators. The professor was referring to very low switch rates, such as applying and removing power from a circuit. Very old school.

2-) If a diode is used, would the inductor burn if the back emf current is too high? In almost all examples they just use a diode without mentioning any possibility about this.

Nope. The "back emf current" is simply the value of the current which existed when the switch was opened. The diode needs to adequately sized, though - it must be able to carry whatever current the inductor was carrying.

This is an addition to what others have said - not a complete answer by itself:

A "feature" of using the resistor is that it can dissipate the stored energy more rapidly than the diode.

In some case this matters - eg relay release times are "slugged" by a diode and may be adversely extended. A compromise is a resistor in series with a diode so dissipation is higher/faster, Vmax can be designed and back current is blocked in the on state.

I was thinking using the resistor instead of diode would bring a longer exponential decay so it would be problem if the switching speed is much higher than LR time constant. Don't you think a large R would increase the time constant?

No. This is not a "normal" situation.

In an inductor, at turn off I_existing WILL continue to flow.

If there is NO series path then 1/2Li^2 energy will convert to 1/2CV^2
where C is available capacitance - added or stray.
If only stray capacitance is present it is often small .
For small C V must be very large - you can get kiloVolts of spike from a low voltage supply worst case.

The time constant for an LR combination is tc = (L/R).
ie as R goes up tc goes DOWN.
This is because Iexisting MUST flow so
V = Iexisting x R.
For large R you get large V and larger power as
V^2/R or I^2R.

ie increasing the value of a shunting resistor
will dissipate more power per time period
(and more peak power)
and take less time for Vspike to decay
but voltage increases with R
and energy dissipation rate with R squared.

V=IR. This is something you cannot work around.

With the switch closed such that the inductor is charging or has charged up, a parallel resistor will also provide a "leakage" path. If the R is large enough this might not be a concern.

But when you open the switch the inductor is going to want to keep the current flowing and now the path is via the resistor: V=IR and thus the voltage across the inductor will rise to satisfy this.

You might be able to tolerate this in which case ... Sure and its a balance between the losses due to the leak path and the resultant voltage to maintain current flow.

Or you could just use a diode

In general, the use of a resistor alone for flyback suppression is frowned upon due to the conflict between making the resistor large (to avoid excessive steady-state dissipation when the coil is being driven) and making the resistor small (to limit the back-EMF voltage in a meaningful way as opposed to the uselessness of the 10kOhm resistor given in the question). A more practical non-diode-based snubber network uses a capacitor in series with the resistor -- this allows a small resistor (say on the order of 30-100 ohms instead of 10k ohms) to be used without dissipating any power in the resistor under steady-state conditions.

That professor is talking out of his a... No current through the resistor when the switch is closed, and the resistor will take up the current when open.

You might want to use a bleed resistor in series with a flyback diode, but only to expedite the dissipation of the power stored in the coil - ie. to make a relay switch faster. But that's another story.

Not the answer you're looking for? Browse other questions tagged passive-networks flyback back-emf or ask your own question.