Television flyback transformer: does it do 2 tasks ie. horizontal flyback and E.H.T.?

E.H.T. (Extra High Tension) generates the cathode ray; ie. acts in same direction of the main pathway of running electrons, i.e. "normal" projection to centre of screen from cathode. Does-it do something with horizontal movement of electron beam on the screen???

Also, in the terms, "Flyback Transformer", "Horizontal Flyback", "Flyback-pulse" etc; there is a common-word "Flyback". Are these all flybacks the same thing?

No. The E.H.T. ACCELLERATES the electron beam generate at the cathode.

Does-it do something with horizontal movement of electron beam on the screen???

Also, in the terms, "Flyback Transformer", "Horizontal Flyback", "Flyback-pulse" etc; there is a common-word "Flyback". Are these all flybacks the same thing?

Yes. The word "flyback" refers to the rapid return of the electron beam to start the next line sweep.

In a strict sense, the EHT does not generate the electron stream ("cathode ray") in a CRT. The electrons are "boiled off" a heated cathode and modulated and accelerated by a series of grid and anode electrodes in the neck of the CRT, conventionally called an "electron gun". In a colour CRT, each of the red, green, and blue colours might have a dedicated electron gun, which "fires" the electrons at the phosphors on the front glass of the CRT. After impact, a "cloud" of free electrons begins to gather near the front glass, and would repel new incoming electrons, until sufficient numbers had gathered to prevent any new electrons from actually reaching the phosphor.

The EHT is actually connected to a conductive layer inside the "bell" of the CRT/picture tube, and acts as a positive electrode to attract and "collect" these free electrons after they have impacted the phosphor.

The flyback circuitry is so-called because the horizontal deflection waveform that controls the horizontal sweep of the electron beams resembles a sawtooth with a long linear ramp up, and short steep ramp down. The ramp down is the period in which the electron beam is returned from the extreme right to the extreme left of the CRT/TV screen, and called the "horizontal flyback" because the electron beam "flies back" to the left in preparation to beginning another horizontal sweep of the screen. Because the flyback is a very steep ramp, it has a high di/dt. This steep ramp is the "flyback pulse" and is used to generate the EHT through a step-up "flyback transformer" and rectifier.

This is "horizontal flyback" when talking about CRT screens: - 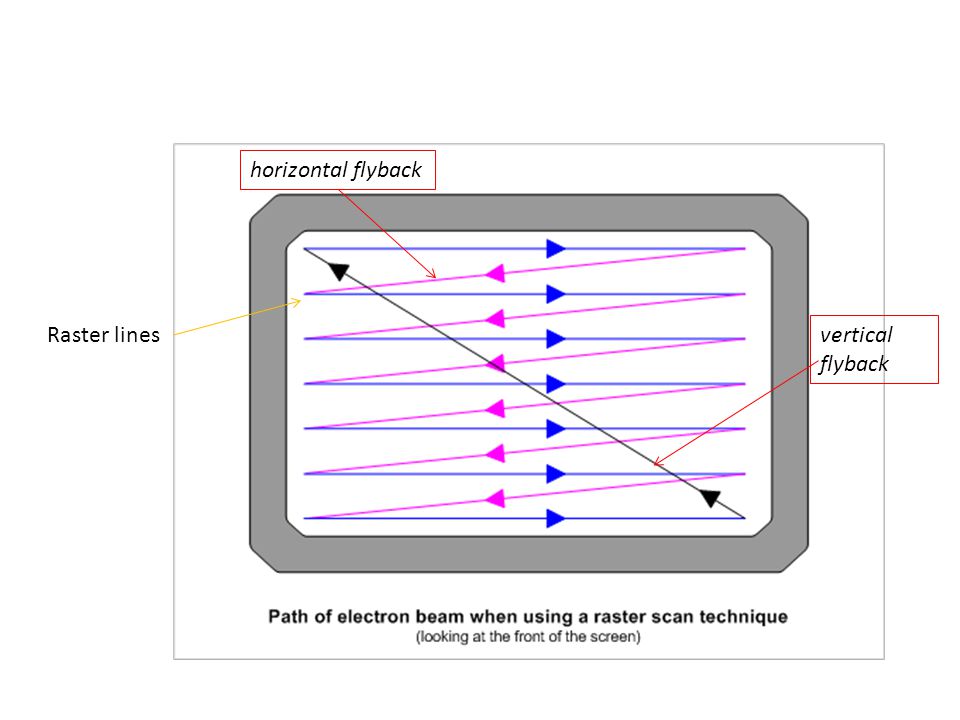 This is unrelated to the term "flyback transformer" other than the fact that the "method" and the "device" are both "used" inside an old TV or oscilloscope.

The term "flyback pulse" probably refers to the well-known problem that flyback SMPS's have when switching - not all the energy taken-in by the primary can be released to the secondary and this creates a back-emf that needs to be snubbed out else the output transistor may fail. It usually looks like a pulse and is controlled (limited) on the primary side of the transformer by Rs, Cs and Ds shown below. 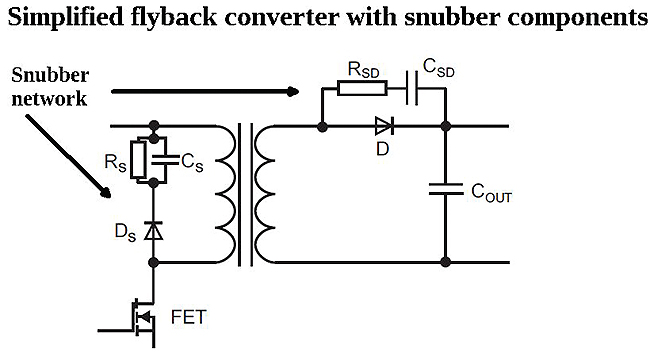 TV tubes use magnetic deflection to move the beam across and down the screen. The magnetic fields are produced by a coil assembly (called a 'yoke') which surrounds the neck of the tube. These coils need a lot of power to get full deflection.

To get the required horizontal beam movement (scanning linearly from left to right to produce a horizontal line, then 'flying back' to the left during the horizontal sync pulse) requires a sawtooth current waveform. However the deflection coil has inductance so it generates an opposing voltage proportional to the rate of current change. This is fortunate because it means the drive circuit only needs to switch a fixed voltage across the coil to generate the ramp-up current, then switch the current off to complete the sawtooth and return the beam to the left side of the screen.

During the flyback period the rate of current change is much higher than during the forward scan, so a very high voltage is produced. To get the current down to zero the energy stored in the coil's magnetic field has to be removed. Rather than waste this energy, it is used to help generate the EHT voltage which accelerates the electron beam in the tube. This is achieved by coupling the horizontal coil to the primary side of the EHT transformer, and then both are driven with the same rectangular voltage pulse.

So the beam 'flyback' at the end of the sawtooth deflection is the same as the 'flyback' pulse in the EHT transformer that generates the EHT voltage for the tube. In a TV set these two 'flybacks' refer to the same thing. However the same principle is also used in other switching power supplies, in which case 'flyback' refers only to using the stored energy in the transformer to produce output voltage.

Not the answer you're looking for? Browse other questions tagged transformer flyback crt or ask your own question.