Why do condors get electrocuted by power lines?

Plenty has been said about why birds are safe to land on power lines. But condors, apparently, are not. The linked article explains that condors are electrocuted often enough and endangered enough that they are doing special "power pole aversion training" to keep them away even after release.

Why are condors electrocuted while other birds (pigeons, crows, etc.) are perfectly safe?

Wingspan. Condors are large birds and can easily bridge the gap between the divided power lines. Pigeons, Crows, etc, are tiny. The only way to get shocked is by completing a circuit after all.

Which is why that article has a spread its wings pun in the title California Condor Recovery Program Spreads Its Wings.

The California condor is big. In fact, it's the largest flying bird in North America with a wingspan of 9 1/2 feet.

Michael Mace, curator of birds for the San Diego Zoo Safari Park, tells NPR's Arun Rath that the condor "is like the 747 compared to a Cessna if you look at it proportionally with other species like eagles and turkey vultures."

Mace works in a condor power line aversion training program at the zoo. It was developed to address the condors' unfortunate run-ins with power lines.

"When they're flying, there's no reason to look forward because they're scanning the earth looking for carrion," Mace explains.

Because the birds have no reason to look forward, they fly into power lines and risk electrocution. On top of that, when the condors are looking for a place to sleep, they land on power poles and structures, and get electrocuted there too.

Their large size makes them more vulnerable to electrocution than smaller birds, because they're more likely to touch two lines at once. (Touching just one wire is safe, which is why many birds land on power lines without consequence).

Since replacing power lines with a larger spacing between wires is completely impractical and unfeasible, a system of training animals with aversion therapy was devised. Humans are trained the same with constant warnings not to touch live power cables, and training for power line workers.

Figure 1. The condor, monotypic genus, is the largest bird in the Western Hemisphere with a wingspan of up to 3.5 m.. Photo by Colegota on Wiki Commons. 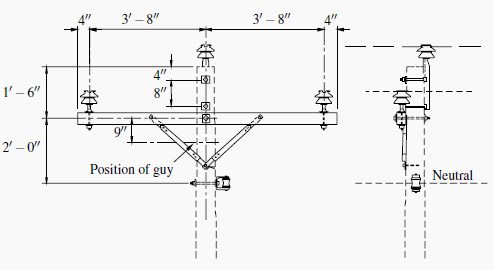 Electrocution will occur if the bird's wings bridge the cables or a cable to earthed structure. Smaller birds will pass through unscathed.

Another factor may be the larger bird's inertia. At take-off the bird is having to generate maximum lift by wing flapping - unlike the photo which appears to show effortless gliding. During this stage of flight the ability to avoid obstacles is probably critically reduced. I know that in Ireland the electricity network provider (ESB Networks) has a particular problem with swans (Ireland's largest bird) whose water runways are used from generation to generation. Cable routing across waterways is sited to facilitate the birds.

Not the answer you're looking for? Browse other questions tagged voltage safety power-engineering or ask your own question.

13
Why does arcing occur on helicopter power-line repair

2
Parallel Transmission Lines
18
Why does reactive power affect voltage?
3
Zero resistance transmission lines?
71
Can a bird, previously at earth potential, get electrocuted by landing on a powerline at high-enough voltage due to the initial “equalization charge”?
0
Low voltage power lines - formula for spacing between poles?
0
Factors that limit maximum power transfer through transmission lines?
1
Understanding power system lines and their capacity
1
What causes power losses in transmission lines?