“A zener with series diode”?

So I'm still reading The Art of Electronics Third Edition. On P.39, when dealing with inductive "kick", I found this sentence:

For the fastest decay with a given maximum voltage, a zener with series diode (or other voltage-clamping device) can be used instead, giving a linear-like ramp-down of current rather than an exponential decay (see discussion in Chapter 1x) 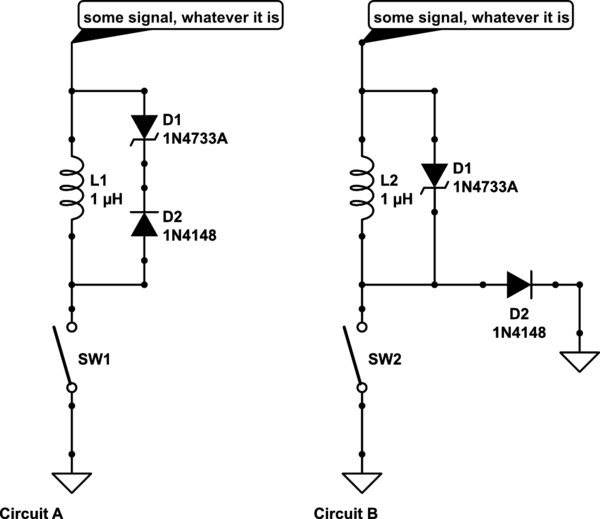 Which circuit does the author mean? In fact, neither of them seems to work to me:

So, what do you think the author wants to express by saying "a zener with series diode"?

The left circuit (A) is what he means.

The Zener diode limits the voltage across the inductor to its nominal value. The other diode is there just to block the Zener diode in the forward direction.

Concerning the decay time, this is better than just having the normal diode, because a normal diode just yields a voltage of ca. 0.7 V across the diode. For fast decay, we want the maximum tolerable voltage (e.g. as much as the switching transistor can handle) in order to have high power which means dissipating energy in less time.

More detailed explanation:
Let's consider the time after the switch opens (after the coil has been energized):
The current through the inductor drops suddenly which results in a reverse voltage across the inductor ("reverse" means that now the bottom terminal is more positive than the top terminal). That voltage can damage the transistor (acting as the switch) or create unwanted sparks etc.
In order to avoid or limit that voltage it can be clamped by a normal diode (circuit A without Z-diode). What actually happens is that the total energy, \$E = \frac{1}{2}LI^2\$, stored in the inductor must be dissipated. Energy is the integral of power over time \$E = \int P dt\$, i.e. it takes some time depending on the dissipating power and the time is shorter if the power is higher. The power on the other hand is the product of voltage squared over resistance (inductor and diode resistance) \$P = \frac{V^2}{R}\$, i.e. we have a higher dissipating power, i.e. higher energy decay rate, if the voltage is kept higher (circuit A with a Zener diode).

Here is an LTspice simulation of the situation

The top graph shows the power dissipation in both inductors. The area under both power curves must be the same (= energy stored in the inductor).

The bottom graph shows the switching signal (red) and the voltages at the bottom terminals of the inductors. 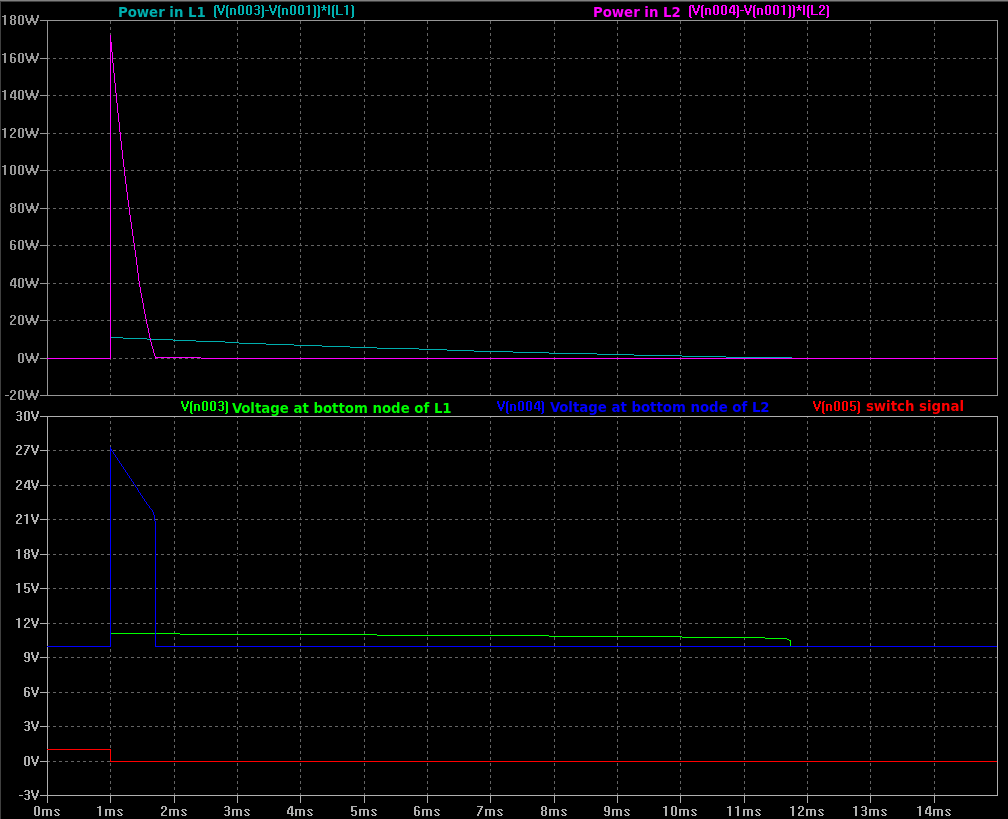 The problem with the circuit shown in Figure 1a is that it maximises the drop-out delay of the relay. This can be a problem when a rapid response is required but also tends to open the contacts slowly and this may cause arcing.

Imagine that the relay coil was purely inductive and had no resistance and that D1 was an ideal diode with no voltage drop. Then when SW1 opened the inductance would keep the current flowing around the loop forever. In any practical circuit the coil resistance, \$ R_L \$ will burn up the energy and the current will decay.

If we were to adding extra resistance in the loop by adding a resistor in series with D1 (see \$ R_{SNUB} \$ in Figure 2) we can improve the speed of drop-out by burning up the energy more quickly. There are two things to be aware of:

An improvement can be made by adding Zener diode D3 as shown in Figure 1c:

Figure 1c will drop the relay out faster than 1a.

Your circuit B is wrong. Both diodes will conduct and short the supply to GND (with two diode forward voltage drops).

Figure 2. (a) Addition of snubber resistor to speed relay drop-out. (b) Equivalent circuit when SW1 is opened.

In the circuit of Figure 2 the inductance stored energy is dissipated in its own internal resistance, \$ R_L \$ and the external snubber resistor \$ R_{SNUB} \$.

The potential problem with this is that the current will generate a voltage across \$ R_{SNUB} \$ of voltage IR. If this voltage exceeds the rating of SW1 then damage may occur. (SW1 could be a mechanical or semiconductor switch.)

Not the answer you're looking for? Browse other questions tagged switches inductor zener basic diode-clamp or ask your own question.

6
Why would you bypass a zener diode in the flyback protection of a relay coil?
2
On a relay coil, why use an MOV instead of flyback diode?
2
Ringing seen when a zener diode is used with series diode as a snubber
0
Why is Zener reverse based on relay circuit?