I'm trying to design a circuit that will let me drive an LED or Diode laser with a RF signal up to ~20 MHz or so. Since the optical device will need to be biased with a DC current, a bias -t is a natural choice. I was planning on using a GALI-84+ amplifier from Minicircuits to amplify my RF signal and then pass it into a bias-T circuit, however when I was looking at the schematic for the eval board for the GALI-84+, I noticed that the output of the amplifier is biased using an inductor and a DC supply, before it is AC coupled using a capacitor to the output.

I contact Minicircuits asking if I could remove the coupling capacitor and use this circuit to both bias the diode and amplify my signal at once, but they said:

The GALI-84+ is an RF amplifier designed to drive 50 Ohm loads. To drive an LED, you will need to configure the amplifier conventionally, detect the RF output signal using a simple diode detector and use it to turn on a transistor with the LED in the collector.

They described the diode detector as, "a series small signal Shottky diode feeding a 1K resistor to ground", and then connecting the Shottky to the base of a transistor.

1) Why use a diode detector? 2) Will I harm something if I use the GALI to drive a non-50ohm load directly?

Update Is there any reason I can't use this configuration to drive my LED? Since the amplifier seems to be a Darlington pair, wouldn't this be appropriate for driving a variable current? The non-handdrawn portion is the Gali-84+ schematic from the datasheet. 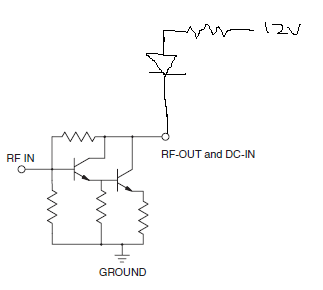 Update A few details on the specifics. I need to dive a diode laser, with up to 200 mA of current. The laser turns on at about 4v, with 40 mA of current, and will be driving about 200 mA by 5.5v. I need to bias the laser on (above the cut-on voltage) and drive it with an AC signal. So, bias at 4.75v and driving with a +/- 100 mA current, or +/- 0.5v. The diode is extracted from BlueRay DVD players, and as such, I don't have detailed specifics on its behavior.

I'm not following what exactly this Minicircuits thing is, but it sounds like they thought you want to turn on a LED when RF is present, hence the detector. It seems you actually want to drive the LED with 20 MHz.

At that speed, it's a good idea to actively turn off the LED, not just on. I haven't tried this, but this double emitter follower might do what you need:

When the digital output is at 5V, there should be around 4.3V on the emitter of Q1, which should be enough to turn on the LED thru R1. If D1 needs about 2V, for example, then R1 of 47Ω allows about 50mA thru the LED. Of course you need to adjust this for your particular LED. Note that you can drive it at twice its rated average current since you'll be doing it for half the time.

When the digital output goes low, the emitter of Q2 will go to about 700mV. That's a lot less than what it takes to turn on the LED, and will actively remove some charge to turn off the LED quicker. A ordinary CMOS 5V logic gate should be able to drive this circuit. I don't know why you think you need some sort of amplifier in there.

The circuit you show will work to drive the LED since it can drive 0 to some maximum current thru the LED as a function of the control signal. However, the big question is how well it will work at 20 MHz. At that frequency you have to think about semiconductors being actively turned off, not just on. You have nothing to actively turn off the LED (that's what Q2 is for in my circuit). You do have resistors to ground on both transistor bases, but you have to think about the values carefully to make sure the transistors turn off fast enough.

You now say you want to run the diode in linear mode with a bias of 125mA and a signal level of +-75mA from that. Here is something that might work. I say "might" because there are too many unknowns, especially at 20 MHz. You will have to test and adjust according to what you find:

Q1 acts like a voltage-controlled current sink. R2 is adjusted to get the right bias current with no RF signal in. With 5Vpp AC added to the 5V bias on the base of Q1, the current should vary about over the range you want.

C2 is only for a bit better speed. I took a rough stab at a plausible value, but you'll have to experiment to see what works best in your setup. It will depend on how slow the transistor really is. Note that since this is running the LED in linear mode, there is nothing actively removing charges from the junction when lowering the current. Actual light output will therefore probably lag decreasing current a bit. How much depends on things we don't know at this point. C2 will make the current lead the input voltage a bit in a attempt to compensate for the slowness of the diode and the transistor.

Here's a quick circuit I came up with in LTSpice that should drive an LED or laser diode to 20 MHz, assuming the device is capable of such: 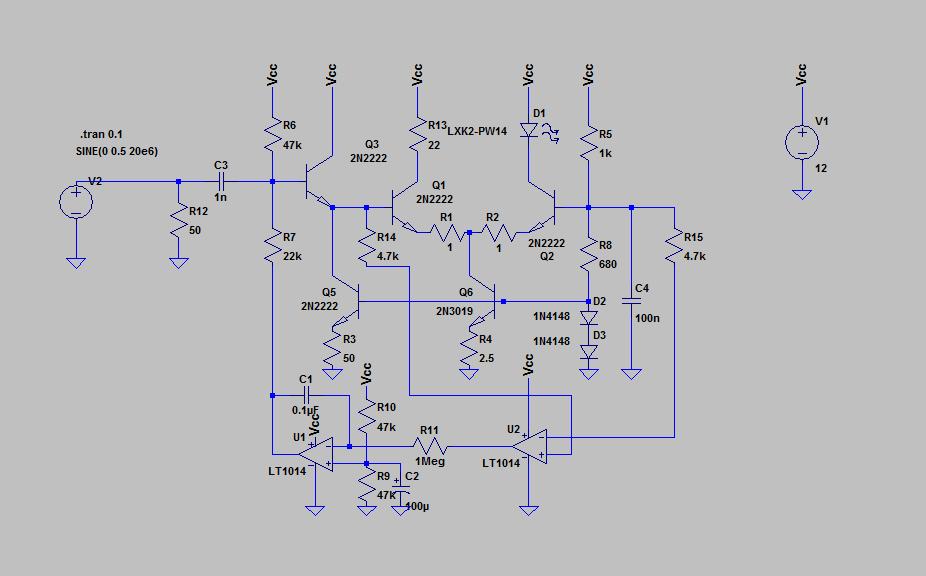 I haven't tested this circuit in real life - don't blame me if it blows up! The particular components should not really critical except for keeping power dissipation in mind; the 2N2222s in the differential pair (Q1 and Q2) are plenty fast for a sine wave at 20 MHz, but will be run near the limits with respect to power dissipation and should probably be connected to a small heatsink. Q6 will dissipate about a watt and should be some kind of small power transistor in a TO-220 package to handle the dissipation. I imagine circuit layout will need to be done carefully for best results.

The 2 opamp sections are a bias servo, and can be any dual single supply opamp, like an LM358. This is kind of a quick hack, is probably not optimized, and it doesn't have any nice features; the output current will be distorted because there is no global feedback from the diode, there's no protection circuitry for the diode, etc.

Designing a modulator that included all the bells and whistles and also works at 20 MHz will most likely be a non-trivial task!

Please take a look at my question BJT push-pull modification on how to drive BJT fast. You darlington pair would be very slow, shutting off would be up to 100ns-300ns.

The second point is that you should not turn off your LED completely, because it would slow down next turn-on. You need to always feed very small current to LED, like 0.1-1mA, so that is glow very slightly.

If you get best push-pull circuit from my question, and feed signal to led through a fast diode (1N4148 should do the job with it's 2-4ns times) & current limiting resistor, the only thing you would need to add is high-value (some 10k-100k) resistor from the VCC and then a diode to your LED. The idea is that when led is turned off by BJT's if will get small current from VCC through high-value resistor.

Also, the amplifier is designed to provide the specified gain when it has a 50 Ohm RF load, but has whatever is the specified DC load providing bias. You will not be operating it with the designed RF load, so the gain achieved will not be what the datasheet says. If the current limiting resistor is greater than 50 Ohms you will probably get more gain than expected, and less bandwidth.

Nonetheless, it's a high-gain amplifier designed for 6 GHz and you're using it at 20 MHz...there's a good possibility it will work adequately.

How to deal with these would be a separate question.

In one place you say you want to bias the LED/laser at 100 mA, in another you say 125 mA, and in another you say 200 mA. Since the amp has an abs max bias current of 160 mA, you will not be able to do 200 mA with this scheme. If you want 100 mA, you are in very good shape, that is exactly the recommended bias current for the amplifier. If you want 125 mA you are probably okay, but you are not operating the amplifier in its recommended operating conditions, so performance or reliability may suffer, and you would want to pay special attention to heat-sinking the amplifier.

Not the answer you're looking for? Browse other questions tagged led rf diodes laser or ask your own question.