I'm trying to debug a 100Mbit ethernet board and I'm running up against a problem I'm having trouble trying to resolve. 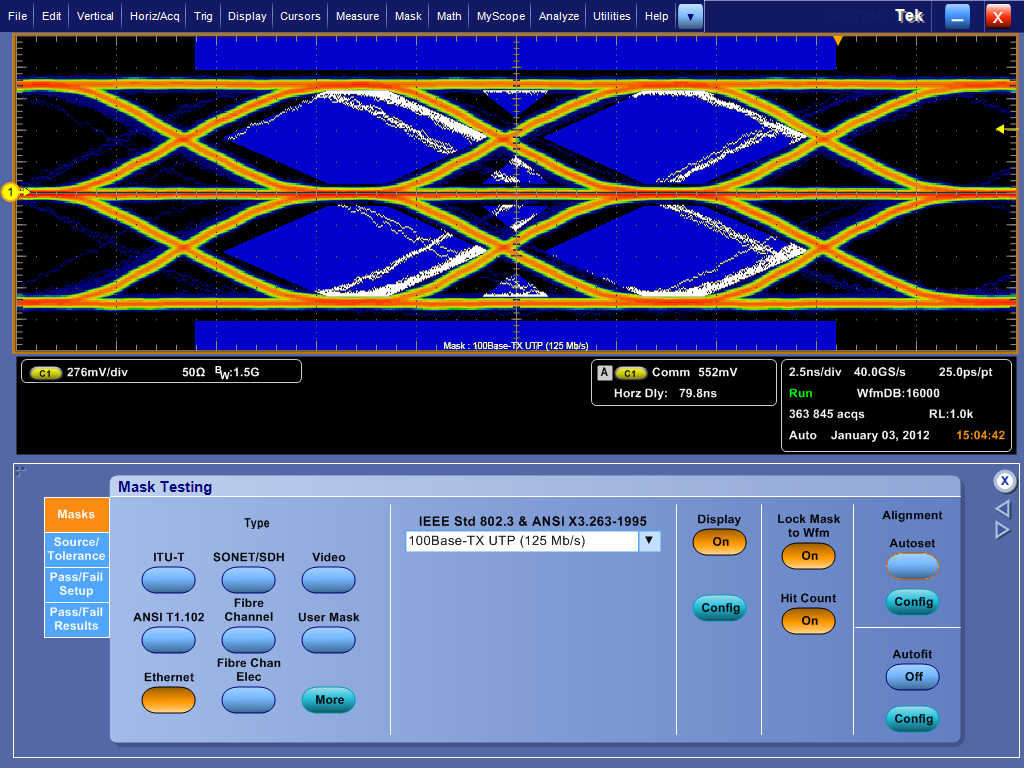 This is the eye diagram for the transmit pair. The receive pair is very similar. It's a LAN8700 PHY, and I've got the MII interface effectively disabled, so the PHY is transmitting IDLE code sequences. It's forced into 100Mbit/FDX as per the datasheet. 100Mbit/HDX is identical.

Correction: The design is using the LAN8700's internal 1.8V supply to power its VDD_CORE net; I must have been confusing the 1.8V logic supply with the VDD_CORE supply in my earlier description. It seems to me that power supply noise is not such a high likelihood, since the high, zero and low levels are actually pretty decent. That is, the eye isn't "squished." The fact that the violations all look like very good transitions, just "skewed" in time makes me think the problem lies in the crystal or supply for the crystal driver/PLL in the PHY.

If I let the eye diagram run (about 15min) the violations in the mask "fill in" such that the white violations you see in the picture become white chevron (>) shapes in the right-hand sides of the blue masks. This would tell me that the timing errors are more or less randomly distributed rather than some kind of discrete noise yanking the timing off an exact amount.

The crystal that the PHY is using has a 30ppm spec which is well within the 100ppm 802.3 spec, and even within the 50ppm recommended spec that the PHY specifies. I'm using loading capacitors which match what the crystal is looking for, and is pretty close to what the LAN8700 specifies as its nominal capacitance.

Before I disabled the MII interface I would see framing errors (as reported my Linux's ifconfig program). There are no errors if I force the link to 10Mbit.

One of the very odd things I have noticed is that if I set the scope up to trigger on the RX_ER (receive error) signal from the PHY to the MAC, it never signals an error even though the frame errors accumulate in the MAC reports. Now from reading the datasheet for the PHY, it is clear that there are actually very few situations where RX_ER would assert, but I find it very difficult to believe that with an eye diagram like what I am seeing the errors are actually between the PHY and the MAC.

I do understand the basics of eye diagrams, but I'm looking to some of the more experienced posters, hoping that they would be able to share some of their experiences in translating specific eye pattern mask violations to likely sources.

You have 0.01 uF caps (C211, C212, C214, & C217) on the unused pins of the RJ-45 and the center taps of the transformer. I recommend shorting out those caps. Your use of caps here is unusual and could cause issues later on, although they are unlikely to be causing the eye-diagram issues you're having. Near as I can tell, the only reason to have these caps is as a DC-Blocking scheme for when someone is using a non-standard power over Ethernet scheme. Standard POE doesn't need this protection, and since the POE standard is now "old" you are unlikely to encounter non-POE standard equipment.

Remove C19 and C25, 10 pF caps on the Ethernet termination resistors. These are way too small, and too far away from anything critical to be of any use.

Change C18 and C24, 0.01 uF caps on the Ethernet termination resistors, to at least 0.1 uF. You could even try 4.7 uF. The "power rail" that these caps are decoupling needs to be fairly stable, and there could be a surprising amount of current flowing through the termination resistors. If L4/L5 is restricting current flow too much, and the caps aren't taking up the slack, then you could have data errors.

Remove C16, C17, C22, and C23-- all 10 pF caps on the Ethernet data lines. The only reason for these is EMI filtering and are not needed for debugging. Remove them to make sure they are not causing other issues. You can always put them back later if you need to.

Change C20 and C21, 0.022 uF caps on the transformer center taps, to at least 0.1 uF. 1.0 uF might be good to try as well. This line might be drooping too much given the 10 ohm resistor and L4/L5. You could even short this to VCC for debugging. The only reason for the resistor (and to a lesser extent the cap) is for EMI filtering. When you re-spin the PCB, you should connect the 10 ohm resistors directly to VDD33 instead of going through L4/L5. The 10 ohm resistor and L4/L5 are redundant. By going direct to VDD33 you can prevent injecting noise into your termination resistors and also makes optimizing the filtering in this area easier.

You'll need more caps on the VDDIO pin, or short out the bead. This pin is providing power to lots of I/O pins and will have a lot of current on it. If it is current starved because of the LC filter (bead + 0.4 uF) then you'll have lots of simultaneous switching noise on the I/O pins. That'll actually cause more noise than what you're filtering out with that bead. It's even possible for this noise to make it to the Ethernet outputs.

Verify that you have the pin-outs on your transformer correct. While unlikely, it's possible to have the center tap and another pin swapped. It's worth spending 5 minutes verifying things. For that matter, verify the pin-outs of the LAN8700 as well.

If none of that improves things, then get a 25 MHz metal can oscillator and replace your crystal. I've seen crystal circuits do weird things, so if only for the peace of mind it's worth hacking up your prototype board to make sure your clk is stable.

That's all I see at the moment. Hope this helps!

My 2 cents: I agree with your recommendation to choose the right crystal oscillator for 25 MHz. I used NSC's DP83865DVH in 1 Gbit mode and when it got in a nonstable state on long test cable ("special" poor quality 5 cat and near 110 m), replacing the XTAL made a big difference. Circuit became very stable and the price of such an "improvement" is ~10 cents only.

0
Ethernet communication between 2 controllers
12
What separates a "good" eye diagram from a "bad" one?
19
PCIe, diagnosing and improving an eye diagram
11
Ethernet RMII on two layer PCB
0
What does it mean if eye diagram voltage (0 and 1 level) goes negative?
0
Difference between conventional Eye-diagram voltage plot and "Eye-density" plot in ADS Keysight Simulation
7
Design ethernet switch for multiple devices on PCB?
1
Ethernet Phy Rx developed in a FPGA to send data to an ethernet Mac