I have a circuit with a very-low-power Jennic JN5148 module with microcontroller and 2.4 GHz radio, and some low-power sensors.

I have to measure the supply current of all these components, in an interval of around a second and with a resolution of about 100 uA. These currents may have a maximum value of about 30 mA for the Jennic module, and slightly under 1 mA for the other components.

I should measure these currents simultaneously and at a frequency of about 10 ksample/s, and i need at least 4 channels.

The other requirements are to use as more as possible instruments over building amplifiers and so, and to perturb at least as possible the supply of components. Actually, the requirement is NO COMPONENTS and ONLY INSTRUMENTS.

Does anybody has an idea about the best fitting solution? (i think that i've explained all but tell me if it lacks something)

EDIT: Found this that could be a solution, but can you help me understanding what is the perturbation that it adds to the circuit?

That by itself sounds doable enough. Even a 10 bit A/D built into a microcontroller is enough resolution if the signal is amplified properly. 10 kHz sample rate is also quite doable. In fact, I'd want to sample faster than that and do a little low pass filtering and decimation in the micro. 100 kHz sample rate isn't even pushing it for something like a PIC 24H. At 40 MIPS that would leave 400 instructions/sample. That is much more than needed for a little low pass filtering and background bookeeping, so that checks out fine too.

The real question is what does the power feed look like and to what extent can you break into it. Are the units under test powered with LDOs? That would be useful, since a small current sense resitor before the LDO wouldn't effect the unit under test power voltage at all. You'd have to subtract off the LDO current, but that is doable. By putting the current sense before the LDO, you can afford to have it drop a little more voltage since the LDO will make sure the UUT still sees the same supply voltage. This of course assumes there is enough input voltage headroom to play with.

If you have to put the current sense directly in line with the UUT, then you have to carefully consider voltage drop versus sensitivity and therefore ultimately signal to noise ratio. Maybe 1Ω is reasonable. That would only drop 30mV max, which wouldn't effect most devices much at all. You'd need a differential amplifier and a overall gain of 100 so that 0-30mA results in 0-3.0V, which is just about the right target for a processor running at 3.3V. Various folks make such diff amps or specifically high side current sense amps. If this is a one off, I'd start with Analog Devices. A 10x diff amp with 1 MHz gain-bandwidth shouldn't be hard to find. That would need to be follwed by a ordinary 10x amp before the micro, again with 1 MHz gain-bandwidth being adequate. You could try doing the whole thing with a single 100x diff amp, but the gain-bandwidth product should be at least 10 MHz so the choices will be more limited. 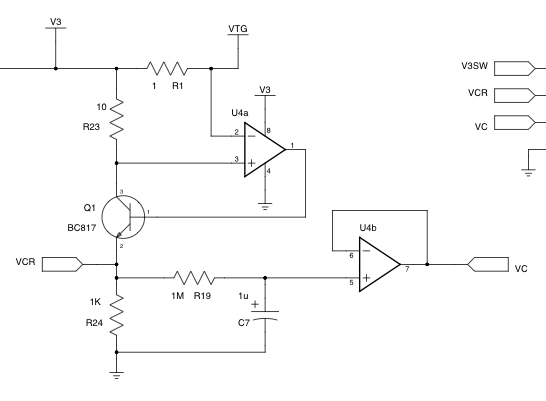 Here's a circuit that I used in a test fixture to measure current.

The current comes in at V3 and leaves for the target at VTG.

The sense resistor is one ohm, which doesn't drop much voltage, but the transresistance of the circuit is 100 ohms. (R1*R24/R23)

It is important to use a good autozeroing op-amp for U4, because any offset voltage will cause huge errors in the output. With a good op-amp, errors are mostly resistor matching and Q1's alpha. I used an OPA2333.

The circuit has two outputs: VCR is the unfiltered current signal. Because most low-power systems achieve their low currents by duty-cycling higher-current outputs, monitoring VCR on an oscilloscope will give you a good snapshot of the health and operation of the system. And it's easy to visually integrate under the current peaks to get an quick idea of the power budget. Here's an example of a system with a 2.4GHz radio module (I've notated the different power-using parts of the system): 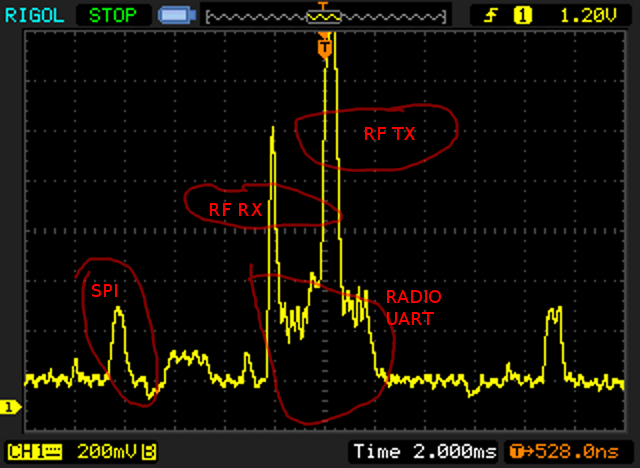 Because of the duty-cycling, it is hard to get a good average current reading with a DMM that samples several times/second. The VC output provides a low-pass filtered view of the current signal. (The capacitor shows a + symbol, but don't use an electrolytic with its high leakage current.)

This is not a low-cost solution, but it might actually do what you're asking for.

Consider a high-end benchtop multimeter like Agilent's 34410A or 34411A. Keithley and other vendors are likely to have comparable models available. The Agilent meter can measure 10k samples per second (50k/s for 34411A) at 5-1/2 digit resolution, and has an external trigger which would enable you to syncronize measurements between 4 meters. Readings can be logged to internal memory or streamed out via USB, GPIB, or LAN to your PC.

The downside is a list price of $1300 per channel.

Just for information, we found this DC power analyzer with this Supply Measurement Unit (SMU) to be the best solution for our purpose. It's a veeeery nice toy, even if we have only two of these modules. It has a huge amount of features, like an auto-ranging functions that allows to measure up to 3A and down to about 10 nA automatically. It can log at up to 5 us/sample and for up to 999 hours. Ah, it has also USB port with dedicated PC interface.

Definitely, more than we need, except for the number of channels, but we made it to be enough :). The price is not the lowest, but we (in another lab, of course) already had one, so...If you can afford it it's definitely worth!

Not the answer you're looking for? Browse other questions tagged current-measurement low-power high-frequency sampling or ask your own question.

6
Measuring total energy used by a project
4
Is it possible to make a non-inverting difference amplifier?