How does the Electrical Grid React to Large Changes in Supply or Demand?

I'm performing some research for a software project that monitors power generation and consumption for a large fictional spaceship. My rationale is I'd like to first understand how real-world power generation works before starting to make the app feel as authentic as possible when using it.

My question stems from my current understanding of how the electrical grid works. Energy is generated through whatever mechanism (steam/mechanical, photo-voltaic) and is then stepped up via a HV substation for long distance transmission. Large factories (Steel Mills, Microchip Plants, etc.) may have a substation dedicated to them for their operations. Otherwise, a substation steps HV down to MV for smaller scale distribution (factories, large office buildings, etc.). This is repeated again for LV, for delivery to homes and small businesses. It's a simple model, albeit misleading because it presents a linear chain of flow from source to load, with a single source generator of power. In the real world, there are multiple stations that are running to meet the demand, and they adapt as the demand changes over time.

Suppose a large event such as a generator station unexpectedly shut down. What equipment would be involved in "rerouting" power to minimize the possibility of blackouts? Or, if a rolling blackout was temporarily implemented because of high demand, what equipment or process would be involved?

What equipment would be involved in "rerouting" power to minimize the possibility of blackouts?

Transmission switching stations re-organize things when there are problems with generators or section of grid: - 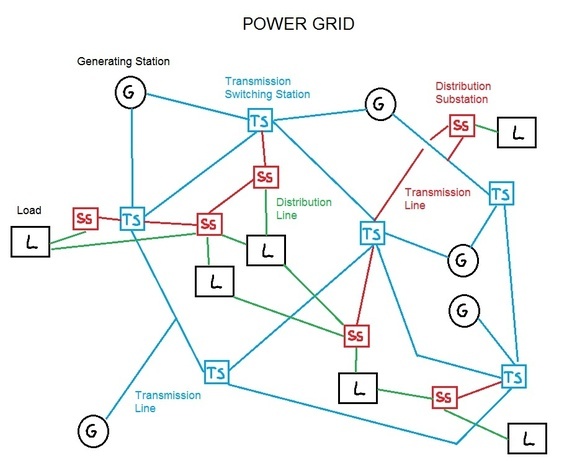 As you can see, every generator connects to the (national) grid via a TS. This wiki page should help. Pictures taken from here or here if not a Quora member

Suppose a large event such as a generator station unexpectedly shut down. What equipment would be involved in "rerouting" power to minimize the possibility of blackouts?

Power grids are engineered to withstand the failure of any one component.

For generator failures: There must be enough spare generation running to cover the loss of the largest generator. This is called "spinning reserve". Note that having spare generators sitting still doesn't help you. A cold generator takes minutes to hours to start, but the spare generation must take over from the failed generator in a period of seconds.

Note: This means that generation companies get paid for keeping generators turning over, but producing no power. People wonder why they are getting paid for producing nothing! The generators aren't producing any power, but they are providing an essential service.

It's also important that the spinning reserve generators be able to react quickly to changing load. "Transient response" to "load swings" are the key words to look for. Big coal / nuclear power plants are no good for this, as they respond slowly to control inputs. Gas turbines are much better at taking swings.

We do engineer transmission systems to have at least N-1 redundancy, so we can lose any one component and still keep most of the system running.

I don't have any experience with HV transmission systems, so I will refrain from saying anything more.

Or, if a rolling blackout was temporarily implemented because of high demand, what equipment or process would be involved?

There are two ways to manage excessive load.

The traditional system reacts to excessive load by turning off supply to entire load centres, i.e. an entire substation, or an entire feeder. This is a "load shedding system".

Loads would be turned off in priority order. You would turn off a factory before you turned off a hospital. You keep turning things off until the load re-balances with the available generation.

The other way is to pro-actively manage the load, i.e. using ripple control signals. This turns off specific customer equipment, such as air-conditioners, at times of high demand. This won't help in severe power shortages, so a load-shedding system is still required.

The actual piece of equipment in a transmisson substation that "switches" electricity around is the Quadrature Booster, otherwise known as the Phase Angle Regulating Transformer. Essentialy, by changing the phase of power with respect to the source, you change the resistance to energy flow, thereby regulating the flow of power through a particular segment of the grid.

8
How are multiple power sources synchronized in a grid that uses a distribution ring?
3
What is the effect of heavy loads on the electrical grid?
4
Modelling of Electric Power Grid

8
How are multiple power sources synchronized in a grid that uses a distribution ring?
3
How exactly does the grid handle small deviations in power consumption?
3
What is the effect of heavy loads on the electrical grid?
8
How to synchronize a generator on the electrical grid?
2
Method for measuring power flow in a distribution network
2
How does the speed of a synchronous generator changes with load?
18
Why do generators have to rotate at a slower frequency if demand outpaces the supply?
18
How can energy "physically" be fed back into the grid?
0
How are locations of power plant and distribution substation decided?