Input capacitance of a differential amplifier

This lecture (page 11) shows how to calculate input impedance of a differential amplifier.

As you can see from the image below the input capacitance is calculated through the steps shown at the right.

Could anyone explain the principle or how the method shown at the right works? 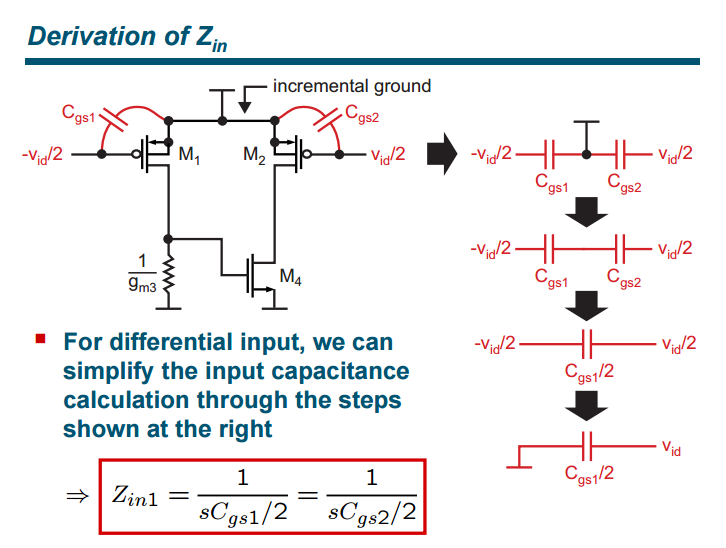 The method on the right describes what happens if you have a balanced circuit with a balanced (differential) input signal.

The top right capacitors with the ground in the middle directly represent the input capacitances of the PMOSFETs. Since the middle node is grounded (actually Vcc but for small signal that is ground) the voltage on the node is zero, as it is grounded DUH !

And because the two capacitors have the same value, the voltage in the middle will not change. For small signal it (behaves as if it) is grounded !

The 3rd picture on the right shows that you can replace the 2 series capacitors as one of half their value. This gives you the differential input capacitance.

The 4th picture with the ground on one side wants to explain what the input capacitance is when applying a single ended input signal.

Not the answer you're looking for? Browse other questions tagged operational-amplifier circuit-analysis integrated-circuit input-impedance diff-amp or ask your own question.