I have been struggling for some time to come up with a meaningful way to test the phase difference between two quadrature channels of an encoder. I have access to a DPO 2014B Tektronix scope and have been trying to come up with a way to make it do what I want, but have had no such luck.

An ideal quadrature encoder should have 90 electrical degrees of separation between any of its subsequent quadrature edges (A high to B high, B high to A low, A low to B low, or B low to A high). Ch. 1 is A and Ch. 2 is B in this case (see below).

As we all know, the ideal case typically isn't the observed case. The encoder under scrutiny has a specified edge separation that it must meet and I am interested in measuring the smallest of those to ensure it meets the specification set forth. The encoder has 1024 cycles (so 4096 edges) per mechanical revolution. The third channel contains the index pulse which occurs once per mechanical revolution.

That being said, first let me explain the two methods I have tried so far:

I would be fine with not measuring the ABSOLUTE smallest edge separation between all of the edges, but I at least need something that could either come up with an average value, or can sample randomly across the entire waveform.

Does anyone have any ideas? Thanks in advance!

If this is a one-off evaluation, then manually is probably the least worst way to do it. But you could use the scope better to help you. The eye is very good at seeing texture. I suggest changing the display so that a failing edge seperation looks like a change of texture, that your eye can pick out easily from 100 good ones, rather than having to scan vertically between two very offset traces.

Does the scope have a deep memory? It's a Tek, so I imagine it would. Record a whole cycle as a single shot. Then expand the trace and use the time offset control to scroll through it.

Adjust the vertical offset to mostly overlay the traces, then your eye has to do less visual interpolation.

Adjust the horizontal gain so that there is some, but minimal, ideally one pixel, black space between the verticals of the traces. If this space disappears, it should be very apparent as a break in the regularity, a change in the texture, of the pattern.

If it needs to be done more than once, then you must automate. Drive the encoder shaft with a motor.

Off the shelf scopes are all well and good, but you are limited in what they can compute. I suggest using Python on a PC, with matplotlib for graph plotting to see what's happening, to examine the spaces between transitions pulse by pulse. Get your data either with a dump from your existing scope, or use the two channels of a sound card for the two encoder channels, with pyAudio to interface to it. When I needed a phase meter with 0.01 degree resolution for work, I couldn't buy or hire one, so wrote one with Python and a standard sound card on my work PC.

Interesting problem. I suggest a ramp and hold solution. Searching around I found a solution in the LM3900 Norton amplifier datasheet. I have never used these and so can't comment on the likelihood of success. 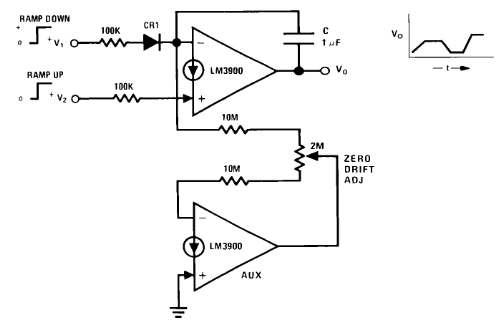 The input current reduction technique of the previous section allows a relatively simple ramp and hold circuit to be built which can be ramped up or down or allowed to remain at any desired output DC level in a 'hold' mode. This is shown in Figure 85 . If both inputs are at 0 V DC the circuit is in a hold mode. Raising either input will cause the DC output voltage to ramp either up or down depending on which one goes positive. The slope is a function of the magnitude of the input voltage and additional inputs can be placed in parallel, if desired, to increase the input control variables. 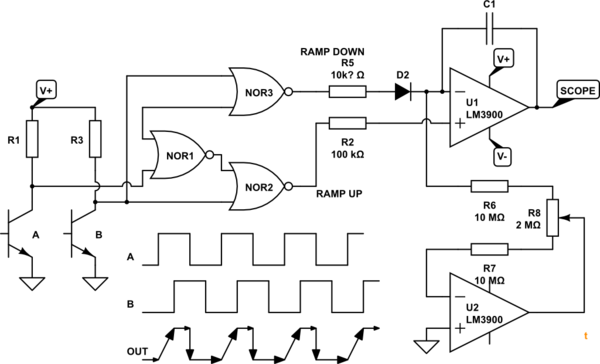 Figure 1. Suggested glue logic between the A and B phases of the encoder and the ramp and hold.

Not the answer you're looking for? Browse other questions tagged oscilloscope measurement encoder or ask your own question.

0
Reading 2 Quadrature encoders using a single Arduino Due
3
Help to understand incremental rotary encoders
1
Could a lower bandwidth or rise time oscilloscope be used for measuring a stable phase shift between two channels?
0
Digital Rotary Encoder — Broken? Or am I misunderstanding how it works?
0
Quadrature encoder - Most efficient software implementation
2
Quadrature encoder has one synced edge and one phase-shifted edge, is this a special encoding scheme?
14
Why are oscilloscope input impedances so low?
5
How to check if my quadrature encoder is broken or not?
1
Encoder direction change during index pulse