I'm not very pratical as I just started learning electronics and I'm planning to make some experiment with Raspberry Pi.

I'm trying to control a 5v relay board that, I think, is made for Arduino, as Raspberry only has 3.3v GPIO.

It's active low, as GPIO.LOW activates the relay, and the 3.3v keep it active too, so I think I'll need exactly 5v to turn it off.

So, basically I think I'll need a transistor, with the base controlled by my GPIO, that will activate a 5v line to Input line of the relay switch.

I have thought about these schematics, but I've been told it will burn my transistor as I need a resistor between 5v and the transistor collector.

My question is certainly basic, but... WHY?

When no current flow through base there will be no problem, when the transistor gets activated isn't my load the relay board? Why do I need other resistors? 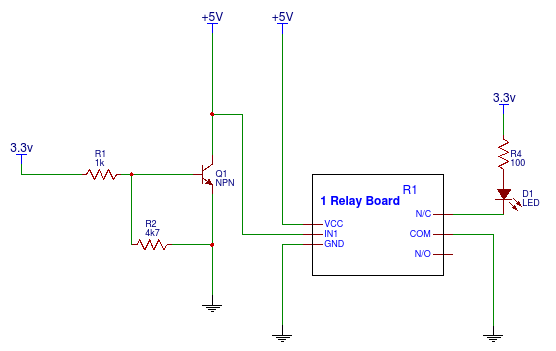 This is the relay board I bought, I couldn't find schemas, so I can't provide more. 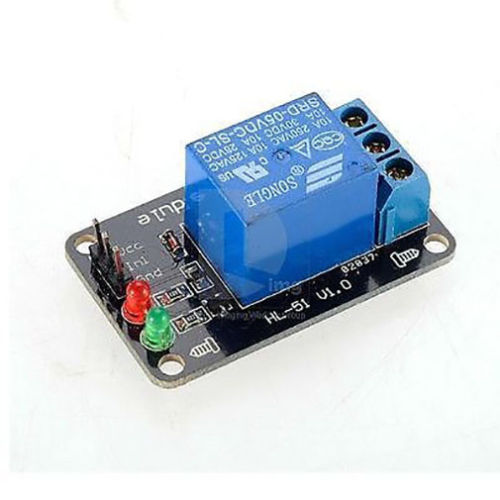 From a quick look at the relay board I note the following: 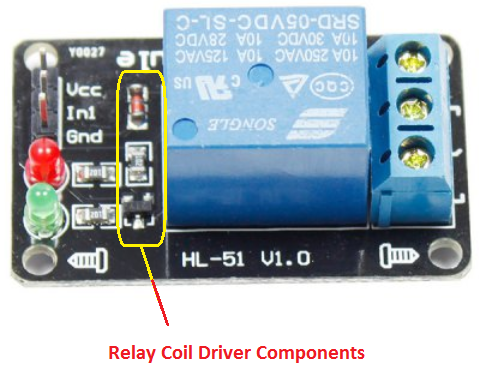 These components provide for a buffered drive circuit of the relay coil. The below schematic is the likely configuration of these components. (LEDs not included). 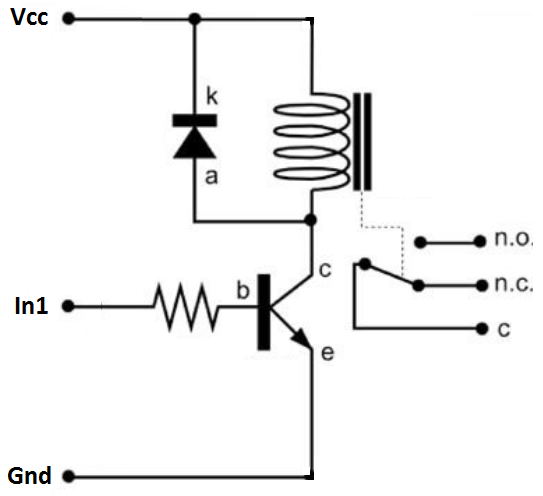 You should be able to connect your 5V supply between the VCC and GND inputs. Then connect the GPIO signal to the IN1 terminal and also the MCU board ground to the GND pin. 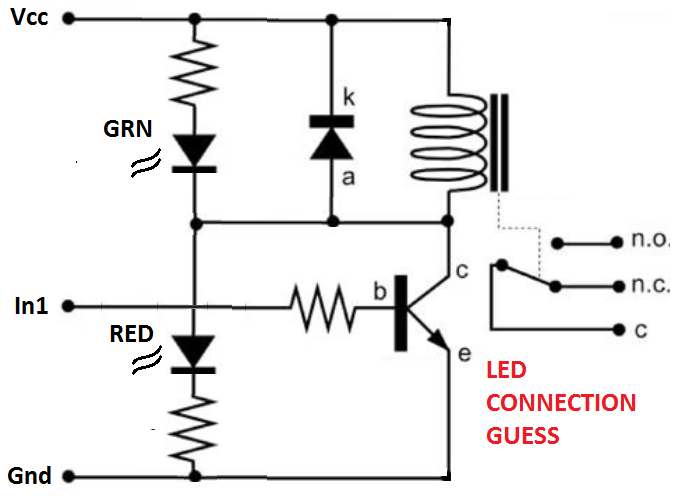 The schematic is probably like this - inside the dotted box (ignoring the LEDs). The transistor is a PNP type so you need to apply close to +5 to get it to turn off. 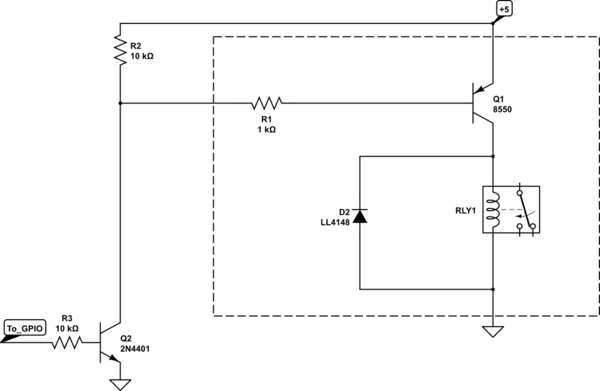 The way this works is that when Q2 is off, R2 pulls the input voltage to the module up to +5V, so no base current flows in Q1. Q1 is thus off, and the relay remains dropped out.

When a voltage is applied to the input, Q2 turns on, pulling its collector down to < 100mV, which causes current to flow through R2 and through R1 (from the base of Q1). Q1 turns on and the relay pulls in.

The relay board itself isn't treated as a "load" as it already has a transistor on it to provide enough current to turn the relay on and off -- an Arduino's output pin isn't beefy enough to do that without the relay module's transistor's help.

When your transistor is conducting from collector to emitter (assumed operating in saturation), there is little resistance from 5 volt to ground. Given a, say, 2 amp power supply, that's 10 watts (2 amps times 5 volts) of power the transistor will have to deal with. Further, if the transistor survives, the power supply will likely fold dropping the voltage to all the circuit causing all kinds of unexpected results.

You can verify by studying the Arduino Uno's schematic here.

If you are driving the relay coil directly, and the other side of the coil is connected to positive voltage, you need an open collector arrangement. You should also use a fly-back diode.

Not the answer you're looking for? Browse other questions tagged transistors relay raspberry-pi gpio npn or ask your own question.